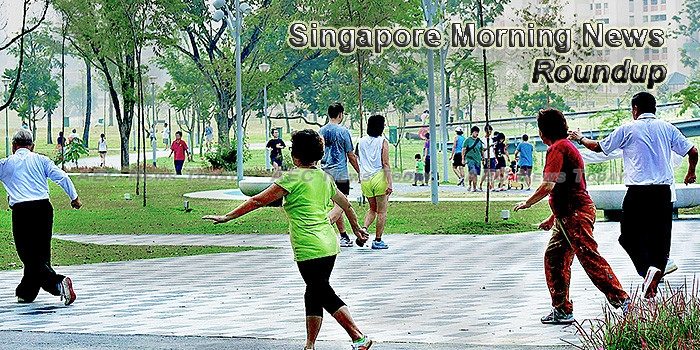 HDB resale flat prices declined 0.1% in Q2: Flash estimates
Resale prices of Housing & Development Board (HDB) flats declined by 0.1 per cent in the second quarter of the year compared to the previous quarter, according to flash estimates released by HDB on Monday (Jul 3).
— Channel NewsAsia

S’pore startup launching SEA’s first cryptocurrency crowdfunding platform
A HOMEGROWN startup is betting on cryptocurrency crowdfunding as the next fintech vogue. It has created a platform to allow entrepreneurs to raise funds for their projects using virtual currencies such as Bitcoin or Ethereum, instead of regular currency.
— The Business Times

Singapore’s GIC plans to acquire 30% of Mergermarket Group
Singapore’s sovereign wealth fund (SWF) GIC is set to acquire a 30 per cent interest in London-based financial news and data company Mergermarket Group. The purchase is said to deliver BC Partners a return of more than two times its original investment.
— Deal Street Asia

Banks offering bras, buffets, facelifts while you check your balance online
THE future of banking in Singapore is well nigh upon us. Some may blanch at the thought, but shopping online will soon be an offering from your bank.
— The Business Times

Singapore private home prices dip 0.3% in Q2, extending losing streak to 15 quarters
Private home prices in Singapore declined 0.3 per cent in the second quarter of 2017, easing slightly from the 0.4 per cent drop in the first quarter, according to flash figures released on Monday (July 3) by the Urban Redevelopment Authority (URA).
— The Straits Times (paywall)

Can Singapore’s growing otter population continue to thrive in an urban landscape?
They’ve been spotted splashing about in the waters of Bishan-Ang Mo Kio Park, foraging for fish in the Singapore River and even drying off on the artificial turf at the Marina Bay Floating Platform.
— Channel NewsAsia

Deals at the 2017 Great Singapore Sale
“Singapore is truly a shopper’s haven and once more, the Great Singapore Sale welcomes our visitors to experience the biggest shopping spree in Southeast Asia,” said Lael Loh, STB area director for Philippines, in a press statement.
— BusinessWorld

KPMG Partners Central Bank of Singapore on FinTech
KPMG Nigeria in collaboration with the Monetary Authority of Singapore (MAS) will be sponsoring a Global FinTech Hackcelerator programme as part of the annual Singapore FinTech Festival which will take place from November 13-17.
— THISDAY

Narrow Trading Range Expected For Singapore Bourse
The Singapore stock market has alternated between positive and negative finishes through the last six trading days since the end of the two-day losing streak in which it had surrendered more than 45 points or 1.4 percent. The Straits Times Index now rests just above the 3,225-point plateau although it may find traction on Monday.
— Business Insider

Singapore Armed Forces setting up new command to integrate C4 and cyber defence operations
The Singapore Armed Forces (SAF) has announced plans to create a new C4 command to integrate and coordinate C4 (Command, Control, Communications and Computers) and cyber defence operations and capabilities, as both are aimed at ensuring the availability and security of SAF military networks
— OpenGov

Funding boost for dad kept awake by worries over disabled daughter
Consumed with worries about his daughter’s future, Mr Lee Shang Lian has not had a proper night’s rest for two to three years.
— Today Online

Singapore trumps Shanghai and Hong Kong for best seaport in Asia award
Singapore has been named the Best Seaport in Asia for the 29th time at the 2017 Asia Freight, Logistics and Supply Chain Awards (AFLAS).
— IBT

880,000 households to get GST vouchers to offset utilities bills
About 880,000 Singaporean HDB households will receive the next installment of the GST voucher – Utilities-Save (U-Save) rebate in July 2017, the Ministry of Finance (MOF) announced on Sunday (July 2).
— Channel NewsAsia

Malaysia files new application to ICJ on Pedra Branca ruling; Singapore says it’s ‘without merit’
Malaysia on Friday (Jun 30) filed an application requesting interpretation of the judgment delivered by the International Court of Justice (ICJ) in 2008 over the sovereignty of Pedra Branca, in a move Singapore has called “puzzling”.
— Channel NewsAsia

Cool project underway: Singapore to develop road map to reduce urban warming
An “ambitious” project that began quietly at the start of this year could bring some relief to Singaporeans who have found themselves wilting in the heat of a concrete jungle.
— Today Online