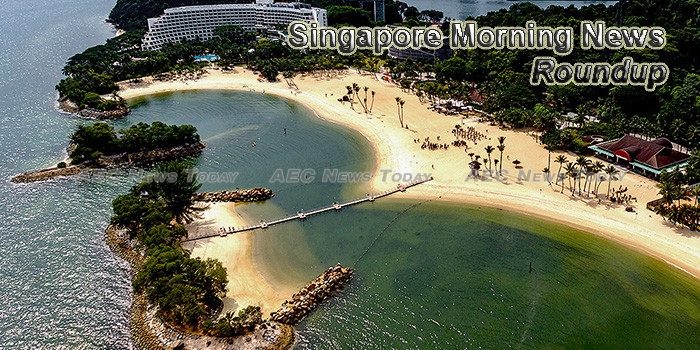 Big drill in the US to hone Singapore’s military capability
Around 750 soldiers from Singapore’s Armed Forces have been conducting a biannual drill at a firing range in the US state of Arizona that is 20 times the size of the 719-square-kilometer city-state.
—Asia Times

First phase of mega waste facility to be ready in 2024, consultancy team appointed
Phase one of the Integrated Waste Management Facility is set to be completed by 2024, two years later than initially planned.
— Channel NewsAsia (video)

Singapore’s ageing population a ticking ‘time bomb’
SINGAPORE’S population will reach a critical juncture next year, as the number of people above 65 will equal those under 15 for the first time in history, UOB economist Francis Tan has said in a research note.
— The Business Times

Singapore issues advisory on Dengvaxia dengue vaccine
Healthcare professionals in Singapore have been advised not to administer a dengue vaccine to patients who have not been previously infected by the virus.
— Channel NewsAsia

More arrests being made on public transport
Arrests by Singapore’s Public Transport Security Command (TransCom) have risen over the last two years, it was revealed on Wednesday (Dec 6).
— Channel NewsAsia

New study estimates 618 tigers in Sumatra, calls for deforestation to be curbed
Despite higher densities of Sumatran tigers in the Indonesian island’s well-protected forests, the critically endangered big cat still faces a high risk of extinction unless deforestation can be controlled, said researchers of a new study.
— Today Online

Govt expenditure on healthcare expected to ‘rise quite sharply’: Heng Swee Keat
SINGAPORE may have to foot a bigger healthcare bill for its ageing population.
— The Business Times

S’pore’s ‘demographic time bomb’ starts ticking next year: UOB report
Singapore will cross the demographic Rubicon next year, when the share of the population who are 65 and over will match that of those under 15 for the first time – a threshold that will have sweeping effects on all aspects of the country, from the economy to defence, a report released on Wednesday (Dec 6) said.
— Today Online

Thermal camera that analyses wounds in seconds among technologies on trial in hospitals
A phone app to detect complications? Several hospitals, including Changi General Hospital, are leveraging innovation to improve productivity and shorten the treatment process.
— Channel NewsAsia (video)

Khaw: Train system is complicated, “it will fail sometimes, hopefully rarely. But it will fail.”
Transport Minister Khaw Boon Wan acknowledged that the Oct 7 MRT tunnel flooding incident was caused by a failure of organisation management at SMRT, and not a failure of engineering, yesterday.
— The Independent Singapore

On heels of Uber driver campaign, Grab ups the ante with new driver features
Less than a month after Uber kicked off a campaign to improve things for its drivers, rival Grab has followed suit with a slew of new features, including one that allows drivers to rate their trips and a hotline dedicated to helping drivers in emergencies, such as accidents.
— Today Online