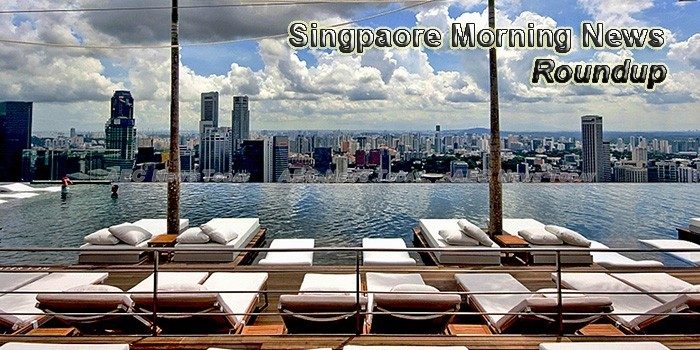 Car dealers to remove warranty restrictions on use of independent workshops
Major car dealers have agreed to remove restrictions on warranties and related documents, announced the Competition Commission of Singapore (CCS) on Monday (Dec 11).
— Channel NewsAsia

Is Singapore ready as the GDPR deadline draws near?
AS Singapore works towards becoming a Smart Nation, it is important to strike a balance between leveraging Big Data to transform the economy and data privacy.
— The Business Times

Singtel Jumps on Phubbing To Preserve Ah Ma’s Christmas Joy (HD video) *Updated
Around the world Christians are preparing to celebrate Christmas. While for many people the event is one of happiness and an opportunity for strengthening family bonds, for others it’s a time of sadness and loneliness, with the modern-day neologism of phubbing (snubbing someone in favour of a mobile phone) often to blame.
— AEC News Today

30,000 workers in cleaning, waste management sectors to be trained in higher-skilled jobs by 2025
As demand for cleaning services continues to increase, the Government is putting place plans to help the industry adopt technology and cope with the manpower crunch.
— Channel NewsAsia

Singapore Taxis’ Night at the Museum
Miniatures of ComfortDelgro Corp. taxis are popular children’s toys in Singapore. Not for long, though. The ubiquitous blue and yellow Toyota Crown cabs are leaving the realm of kids’ imagination and heading for grownup nostalgia. One day soon, they’ll belong in a museum.
— Bloomberg

Uber deal offers little succour to Singapore’s fading taxis
Miniatures of ComfortDelgro Corp. taxis are popular children’s toys in Singapore. Not for long, though. The ubiquitous blue and yellow Toyota Crown cabs are leaving the realm of kids’ imagination and heading for grownup nostalgia.
— DealStreetAsia

HPB launches S$2m health programme to give SMEs more support
SME Health Plus aims to engage 60,000 workers over 18 months and is part of a nationwide push to get Singaporeans to lead healthier lifestyles.
— Channel NewsAsia (video)

Singapore aids Malaysia, Indonesia in search for duo in sampan capsize
SINGAPORE is coordinating search-and-rescue (SAR) operations with Malaysian and Indonesian authorities to locate two men after their sampan capsized on Sunday.
— The Malaysian Insight

Coffee waste to help produce biodegradable plastics
One day, the waste generated from the cup of coffee you are drinking from the hawker centre could be used to make more eco-friendly plastic bags, thanks to a team of Nanyang Polytechnic (NYP) scientists.
— Today Online

Teng bong! Minority languages on the rise in Singapore
Mr Kevin Martens Wong reels off sentences in Kristang, which is among several minority languages in Singapore enjoying a new lease of life after a decades-long drive to encourage the use of English and Mandarin.
— Today Online

Banks sing auld lang syne amid existential question: what is a bank?
THREE years ago, McKinsey took the view that while fintechs would hurt the margins of global banks, banks would be able to stand their ground in holding on to customers.
— The Business Times

Robotics, powered wearables set to improve cleaners’ jobs
To minimise the stench in toilets, floor tiles with coatings that can neutralise odours are being tested in the toilets at City Square Mall.
— Today Online

Car repairs may soon cost less
Drivers will soon be able to fix their cars at a workshop of their choice – sometimes at far lower prices – and not worry too much about losing their warranty, the Competition Commission of Singapore (CCS) said yesterday.
— The New Paper