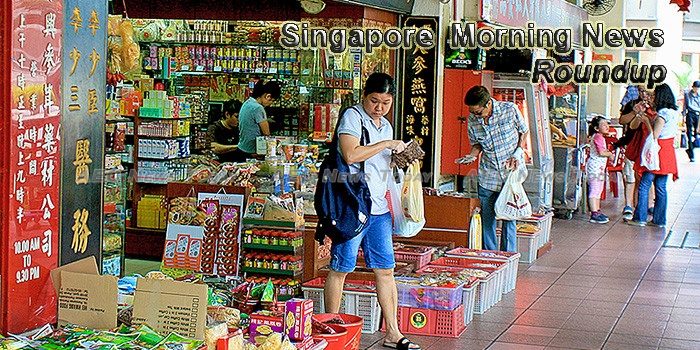 Most Singapore SMBs won’t pay ransomware demands
Most small and midsize businesses (SMBs) in Singapore do not believe in paying off ransomware demands, despite one in six having experienced downtime lasting more than 25 hours during such attacks.
— ZDNet

Corporate governance reaches new high but better stakeholder engagement needed
SINGAPORE companies have raised their corporate governance practices to a new level, going by the Singapore Corporate Governance and Transparency Index (SGTI) released on Tuesday. Closer examination, however, reveals that more remains to be done in areas such as disclosures of stakeholder engagement.
— The Business Times

Fintech sees fewer deals but more money in Q2
THE value of fintech investment in Singapore increased significantly in the second quarter of 2017 when compared to the year-ago quarter, despite fewer deals being completed.
— The Business Times

Can the SGX maintain IPO momentum without CPF-backed liquidity?
The Singapore Exchange (SGX) has seen its IPO pipeline rebound in H1 2017 but it will have to significantly boost the liquidity of its securities market relative to competitors such as Hong Kong, Australia and Tokyo if it intends to retain its relevance as a globally competitive stock exchange.
— DealStreetAsia

Singapore, like the US, says it may regulate some ICOs
Less than a week after the SEC said that it may regulate certain crypto token sales, better known as ICOs, Singapore has followed suit to say it too will regulate offerings that are deemed to be securities.
— TechCrunch

Food-borne hepatitis E virus targets unwary travellers
A week after returning from a business trip in India Mr Harold Zhang (not his real name) developed fever, lethargy, loss of appetite and nausea. His doctor, a general practitioner, initially put it down to a simple viral infection. But the 43-year-old businessman knew something was amiss when his urine took on a tea-coloured hue and the whites of his eyes started to turn yellow.
— Today Online

Singapore Medical Tourism Market and Forecast To 2022
International patients come to Singapore each year for a whole range of medical care from health screenings to high-end surgical procedures in specialties such as cardiology, neurology, oncology, ophthalmology, organ transplants, orthopedics, and pediatrics.
— Business Insider

What Singapore is Keen to Further Tap into Indonesia’s Economic Growth
Singapore and Indonesia have a shared history dating beyond the ancient kingdoms of the Majapahit era and, today, their fates are still closely intertwined, with close economic cooperation a key plank in regional prosperity.
— NETRALNEWS

Judgment reserved in City Harvest case
A five-judge Court of Appeal yesterday reserved judgment on legal arguments raised by the prosecution that, if accepted, may mean longer jail terms for the six people, including City Harvest Church founder Kong Hee, convicted of misusing millions in church funds.
— The New Paper

Singapore Company Agrees to Build on Boeng Kak Lake Land
A company run by Singaporean investors has entered into a $71 million joint venture agreement to develop 1 hectare of land on what was previously Boeng Kak lake, though the company’s Cambodia representative on Tuesday said the deal was not yet finalized.
— The Cambodia Daily (paywall)

Malaysia, Singapore Conclude Naval Drills
Last week, Malaysia and Singapore concluded the latest iteration of their bilateral maritime exercise. The 30th round of Exercise Malapura reflects the ongoing military collaboration underway between the two Southeast Asian neighbors despite the lingering challenges in the bilateral relationship.
— The Diplomat