By Stella-maris Ewudolu on September 1, 2017 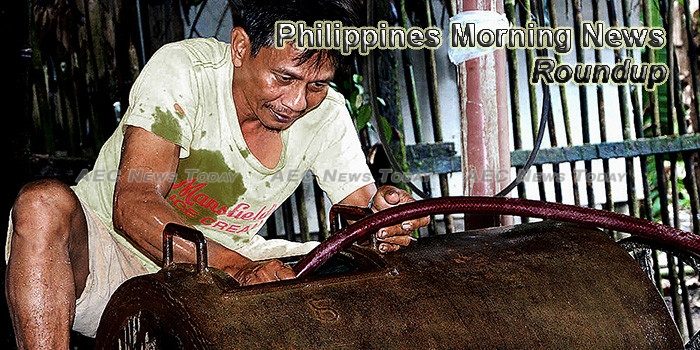 Peso declines further on US GDP data
THE PESO finished the week lower against the dollar yesterday amid a quiet trading session due to upward-revised US economic growth in the second quarter.
— BusinessWorld Online

Hot money outflows reach USD297 M
Volatilities in the financial market as a result of the uncertainties overseas continue to result in net outflows of foreign portfolio investments in the Philippines as of the week ending August 18, 2017.
— Philippine News Agency

Jails, justice system at breaking point as Philippine drugs war intensifies
In a teeming prison for undertrials in the Philippines’ capital Manila, Rody Lacanilao, an inmate for 18 months, says he prays for clear weather at night.
— Reuters

China’s Jiangxi TV seeks ties with PH, other ASEAN channels
Jiangxi TV, one of the top 10 urban television channels in China, has expressed intention to expand cooperation with counterparts in the Southeast Asian countries, including the Philippines.
— Northbound Philippines

Brazil exporters seek speedy resolution of salmonella issue
The Brazillian Animal Protein Association (ABPA) is urging Manila to fast-track the investigation into the contamination of some meat shipments with salmonella to the Philippines in July.
— Business Mirror

Philippines seeks comments on mandate to allow end-users renewable energy consumption
The Philippines Department of Energy (DoE) has invited comments on the final draft of a new scheme that allows end-users the option to choose renewables as their source of energy.
— PV-Tech

Duterte eyes moving intel funds to anti-terror campaign
President Duterte is looking to transfer intelligence funds of his office for the use of the Armed Forces of the Philippines (AFP) in its campaign against terrorism in Mindanao.
— The Philippine Star

Central bank sees August inflation at 2.6 to 3.4 pct
Inflation in August likely ranged from 2.6 to 3.4 percent on the back of higher pump prices, electricity rates and the continued weakening of the peso, the Bangko Sentral ng Pilipinas said Thursday.
— ABS-CBN

PNP asks P1.8B for body cameras
The Philippine National Police is asking Congress for P1.8 billion to equip its personnel with body cameras to wear during operations.
— BusinessWorld Online

Cement makers buck minimum requirements for pre-shipment inspection of imports
The country’s major cement executives, including tycoon Ramon Ang, have expressed opposition to the proposed minimum requirement of pre-shipment inspection for cement imports as they call for a rigorous testing procedure for all cement coming from abroad to ensure consumer safety.
— The Philippine Star

Philippines top banana supplier for Japan
apan’s fresh fruit imports during July 2017 were up 108 per cent on the same month last year, hitting 155,368 tonnes, according to data from Japan’s Ministry of Finance.
— Fruitnet

House panel wants Customs abolished
The House Committee on Dangerous Drugs is recommending the passage of a law that would replace the Bureau of Customs (BoC) with a new tariff collection agency, after several hearings on the P6.4 billion worth of illegal drugs smuggled into the country in May.
— The Manila Times

Philippine palm oil plan ‘equals corruption and land-grabbing,’ critics say
If the street Pedro Arnado was looking down was on the Philippine government’s roadmap for future palm oil development, critics say it would be one highly dangerous to navigate, lined with the hazards of unfair labor practices, land poverty, militarization and environmental degradation.
— Mongabay.com

Divergent twins: PH and Thailand
In 1970, the economies of the Philippines and Thailand looked like identical twins. Almost five decades later, we all know how different the two economies have become. Let me recount and update the story, which I first wrote about in this column 13 years ago.
— Philippine Daily Inquirer

Tax may prompt softdrink maker to rethink $1B investment
Beverage maker Coca Cola FEMSA may rethink its $1-billion investment in the Philippines if the proposed tax on sugar-sweetened beverages (SSBs) in its present form is passed.
— Malaya