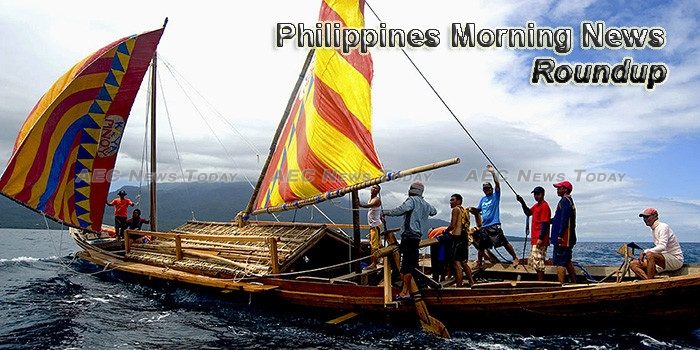 South China Sea Harmony: Beijing’s For The Taking
The Philippines is on the front line of China’s entry into a strategic theatre in Asia that has been dominated by the United States since World War II. Its experience of China’s rise is a sometimes fraught daily reality.
— AEC News Today

Trump to ‘re-energize’ Philippines-US partnership
The United States seeks to re-energize its relationship with the Philippines during President Donald Trump’s visit here for the Association of Southeast Asian Nations (ASEAN) and East Asia summits this week even as it plans to discuss counterterrorism, the war on drugs and the South China Sea issue.
— Philstar

Xi to Rody on South China Sea military buildup: It’s nothing
Chinese President Xi Jinping has downplayed Beijing’s buildup in the South China Sea and has dismissed the possibility of war breaking out over the maritime dispute, President Duterte said yesterday.
— Philstar

Japan to give P676-M loan for Marawi rehab
The Japanese government has committed to provide a P676-million (¥1.5-billion) loan to the Philippines for the rehabilitation of war-torn Marawi City, the Department of Finance (DOF) said over the weekend.
— Philstar

Abe arrives in Philippines for talks with ASEAN leaders
Japanese Prime Minister Shinzo Abe on Sunday began a four-day trip to the Philippines for meetings with members of the Association of Southeast Asian Nations, at which he is set to seek support for a “free and open Indo-Pacific.”
— Japan Today

Rodrigo Duterte: the president warlord of the Philippines
The litany of horrific comments that have catapulted the Philippine leader, Rodrigo Duterte, to international notoriety is so exhaustive that it is hard to choose his most transgressive lines. Nothing, it seems, is out of bounds.
— The Guardian

Iran eyes oil, coal & cement supply to PH
Iranian businessmen are exploring trade opportunities in oil, fertilizer, coal, cement and agriculture products in the Philippines as it opens up its economy.
— Malaya

More PH MSMEs to benefit from ASEAN mentorship program
Startup and expanding micro, small and medium enterprises (MSMEs) are expected to get a boost from new mentorship program of the Philippines and other members of the Association of Southeast Asian Nations (ASEAN) meant to help ensure their businesses become successful.
— Philippine News Agency

Asean, partners link arms in fight vs terrorism
To put it aptly, the Department of National Defense (DND) brought home more than the proverbial bacon when it recently hosted the 11th Asean Defense Ministers Meeting (ADMM) and the 4th ADMM-Plus, through its chairman Defense Secretary Delfin N. Lorenzana.
— BusinessMirror

Government to test rice-corn blend in PH
In order to reduce the country’s dependency on rice imports, the government now wants to see if rice-corn blend could work in the Philippine market as it lays down strategies on how to market corn as an alternative staple to rice.
— Bulletin

Inclusivity a challenge in Asean
As they integrate, Asean economies compete among themselves in attracting foreign direct investments (FDIs) and struggle to lift up small businesses in an environment that is still controlled by big businesses.
— Malaya

Sustainability as disruptive innovation and profit driver
After living in Canada for over 20 years, I found myself in mid-September standing before 26 experienced professionals from China, Japan, India, Mexico, and the Philippines who were enrolled in the Executive MBA program at the Asian Institute of Management.
— The Manila Times

most filipinos back duterte’s martial law
The Third Quarter 2017 Social Weather Survey, fielded on Sept. 23-27, found that more than half of the adult population of 106 million Filipinos agree with President Rodrigo Duterte’s proposal to Congress for the extension of the proclamation of martial law in the whole of Mindanao until the end of the year.
— Manila Standard