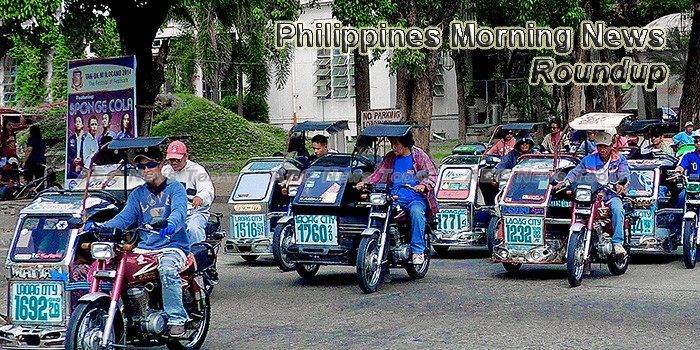 Business as usual for Mindanao banks
Philippine banks are business as usual despite the decision of President Duterte to declare martial law in Mindanao early this week due to the attacks carried out by the Maute group in Marawi City.
– The Philippine Star

Former national security chief bares Hapilon formed a more violent, extreme terror group in Marawi
Former National Security Adviser Norberto Gonzales said that the Marawi situation is “very, very serious” and “dangerous” as the Abu Sayyaf leader Isnilon Hapilon had managed to merge a combination of forces numbering between 400 to 700 from the Maute group, the Abu Sayyaf Group (ASG), and the Bangsamoro Islamic Freedom Fighters (BIFF) in his campaign to establish a caliphate in Mindanao.
– Eagle News

NEDA: Mindanao crisis is a ‘serious’ situation
The National Economic and Development Authority (NEDA), the country’s premier socio-economic planning body, highly regarded as the authority in macroeconomic forecasting and policy analysis and research, said the ongoing unrest in Lanao del Sur is a “serious crisis” situation and its impact on the economy would largely depend on how things pan out.
– Manila Bulletin

Philippines’ Duterte vows to ignore Supreme Court on martial law
Philippine President Rodrigo Duterte has said he will ignore the Supreme Court and congress as he enforces martial law across the southern third of the country, even though the constitution gives them oversight.
– Channel NewsAsia

SC lifts Torre de Manila TRO
The Supreme Court has lifted its temporary restraining order against the controversial Torre de Manila apartment block on Taft Avenue in Manila because it has so far not violated any law.
– Philippine Daily Inquirer

Banks’ profits down 3.42% in Q1
Lower trading gains pushed big banks’ net income lower at the end of the first quarter to P33.74 billion, down 3.42 percent compared to P34.94 billion it had in the same period last year.
– Manila Bulletin

Borrow now for infra development while rates are low — Diokno
NOW is the ideal time for the country to focus on infrastructure development while Philippine borrowings carry low interest rates, according to Budget Secretary Benjamin Diokno.
– The Manila Times

Russia offers cheaper meds, pharma, healthcare to PH
THE Russian government has offered to provide the Philippines cheaper medicines, other pharmaceutical products and healthcare solutions under business deals between the two countries, in addition to agreements previously signed by private businessmen, Trade and Industry Secretary Ramon Lopez said from Russia.
– The Manila Times

Exec says it’s ‘business as usual’ in Mindanao
Barely a week since President Duterte declared martial law in Mindanao, a top official of the Mindanao Business Council said that it was “business as usual” in most of the major island in spite of terrorist attacks in Marawi City.
– Philippine Daily Inquirer

Terror threats make it harder for PH to become key tourist destination
Terrorist attacks have been causing a major strain to the country’s travel and tourism sector.
– Philippine Daily Inquirer

Focus to remain on gov’t tax reform, infrastructure
While the market observes how the peace and order issues in some parts of the country would weigh in the market in the next few days, local investors are expected to keep track on the administration’s tax reform plan as well as its infrastructure push.
– Manila Bulletin

Fewer companies to expand, hire in Q3
Fewer companies are set to expand and hire additional workers amid the expected slowdown in economic activity in the third quarter, results of a survey conducted by the Bangko Sentral ng Pilipinas (BSP) showed.
– The Philippine Star

Dominguez wants DBP as infra bank by end 2017
The Department of Finance (DOF) remains keen on converting the Development Bank of the Philippines (DBP) into the country’s infrastructure bank and is eyeing to start its transition before the end of 2017.
– The Philippine Star

100 dead in Marawi clashes
The fighting between government troops and Maute rebels in the southern city of Marawi has left 100 people dead, the military confirmed Monday, as the crisis entered its 7th day.
– ABS-CBN

Infra spending down 20% in April
Infrastructure spending declined by over a fifth year-on-year in April to P33.5 billion due to the lack of big-ticket projects unlike in the same month last year when several projects were implemented ahead of the elections
– Philippine Daily Inquirer

US-based online payment facility works with DICT
New York based online payment provider Payoneer commits to work closely with the Department of Information and Communications Technology (DICT) in expanding the opportunity of Filipino freelancers and businesses to access the world market.
– The Freeman

Fuel marking to plug up to P44 B in lost revenues from smuggling
The mandatory fuel marking and monitoring system proposed under the government’s tax reform program is expected to plug as much as P44 billion in lost revenues annually due to oil smuggling, the Department of Finance (DOF) said over the weekend.
– The Philippine Star

Gov’t losing up to P44 billion on oil smuggling — DOF
The Department of Finance (DOF) wants to implement the mandatory fuel marking system to plug the estimated foregone revenues of up to P43.8 billion annually due to rampant oil smuggling and misdeclaration.
– Manila Bulletin

Offshore gaming firms drive demand for PHL office space
OFFSHORE GAMING companies have emerged as one of the main growth drivers in the Philippine office market in the first quarter, but the government needs to provide “clear, consistent and reliable” support for this industry to continue to flourish, a property services firm said.
– Business World Online

PH sugar industry seeks to raise yield level by 25%
THE country’s sugarcane industry aims to raise yield levels by over a fourth to 75 metric tons (MT) per hectare by utilizing an Australian-inspired irrigation and sensor technology that would allow the sector to adapt to changes in the climate.
– The Manila Times

Ayala Corp, LT Group to launch joint proj by Q3
Ayala Corp. and the LT Group Inc. (LTG), two of the country’s biggest conglomerates, are now looking to launch in the third quarter their biggest joint project to date, a mixed-use 35-hectare estate development along the C-5 corridor, spanning the cities of Quezon City and Pasig.
– The Philippine Star

PB to consult stakeholders in creating ‘Tourism Code’
The Provincial Board will hold a public consultation with tourism stakeholders to tackle the proposed Cebu Tourism Code.
– The Freeman