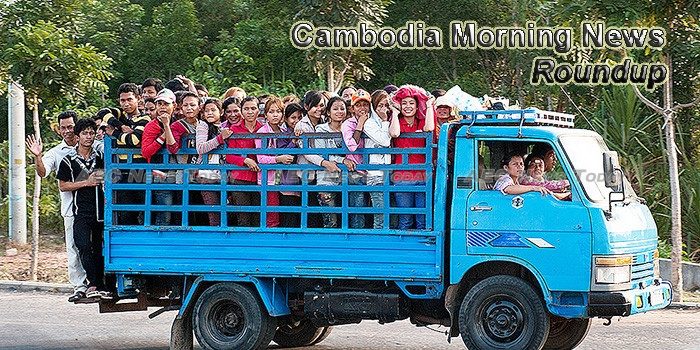 Tackle issues early to ensure growth: IMF official
Cambodia stands to benefit from an uptick in global and regional economic growth but will need to diversify its economy, improve infrastructure and reduce obstacles to doing business if it is to continue on its impressive growth track, a visiting International Monetary Fund (IMF) official said yesterday.
— The Phnom Penh Post

CNRP to Push $500K Per Commune Plan in National Assembly
In what one observer said was simply an act of politicking, the opposition CNRP on Thursday said it would push its campaign pledge of giving $500,000 to every commune in the National Assembly.
— The Cambodia Daily (paywall)

Not all paths to growth the same
Cambodia’s economy stands at a critical crossroads to reach the next phase of development with a recent report urging the Kingdom to ditch its antiquated growth model and adopt more innovative economic strategies that better respond to rapid changes in the global economy.
— The Phnom Penh Post

Concerns raised over climate change funds
A top Cambodian climate official expressed concern yesterday that the United States’ withdrawal from the Paris climate agreement signals potential cuts to the funding of environmental projects in the Kingdom.
— The Phnom Penh Post

Defense Ministry Investigating Thais’ Weapons Smuggling Claim
The Defense Ministry is investigating an allegation by Thai authorities this week that weapons have been illegally smuggled across the border from Cambodia, according to a government spokesman.
— The Cambodia Daily (paywall)

Recounts appear to change two results
With the National Election Committee (NEC) having released preliminary commune election results, parties have begun registering requests for recounts to the body, with one commune each in Svay Rieng and Battambang provinces appearing to have already flipped sides as of yesterday.
— The Phnom Penh Post

Government Pans US Ambassador’s Call for Less Suspicion, Threats
U.S. Ambassador William Heidt yesterday praised the commune elections but denounced pre-election threats, saying the Cambodian government was too suspicious of U.S. intentions, comments that were dismissed by one government spokesman as characteristically manipulative and duplicitous.
— The Cambodia Daily (paywall)