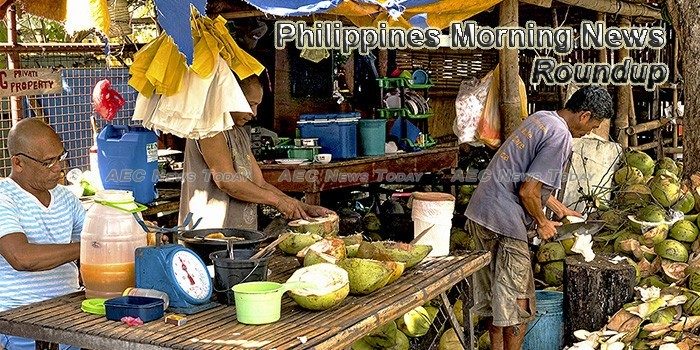 Underemployment rate improves, but number of jobless Pinoys higher
Nearly a million underemployed workers were able to get decent work as of October, according to the National Economic and Development Authority (Neda).
— BusinessMirror

PHL plays hardball at WTO in pushing safeguard deal
Manila has rejected efforts of rich countries to implement deeper tariff cuts on farm products because they were lukewarm to a proposed scheme that will allow developing countries, such as the Philippines, to protect their domestic industries from harmful import surges.
— BusinessMirror

What’s in the New Pakistan Naval Voyage to the Philippines?
A closer look at the interaction within the broader context of ties.
— The Diplomat

Duterte: Reds taught me impunity
President Duterte yesterday criticized the communist New People’s Army (NPA) and its allied organizations for attacking him and his administration following the cancellation of peace talks with the insurgents.
— Philstar

DOT drops move to force airlines to disclose bag fees
The Transportation Department is dropping an Obama administration proposal that would have required airlines disclose checked and carry-on bag fees at the start of a ticket purchase rather than later.
— Manila Bulletin

China’s Once Impossible Friendship With The Philippines Hits Another New High
It looked like harmless progress on the surface, but Manila’s deal this month with Taipei symbolized a broader victory. On December 7, the two Asian governments renewed a bilateral investment agreement.
— Forbes

Govt to run after those tied to dengue vaccine anomaly
MALACAÑANG vowed Tuesday that President Rodrigo Duterte would go after those involved in the alleged onerous P3.35-billion procurement of the anti-dengue vaccine Dengvaxia.
— Manila Bulletin

Critics see no need to extend martial law
LIBERAL Party senators yesterday questioned the constitutionality of extending President Duterte’s martial law declaration in Mindanao, saying there is no actual rebellion or terrorism that necessitates it.
— Malaya

Congress nod seen for 1-year martial law
An overwhelming majority of senators and congressmen are expected to approve in a joint session today the one-year extension that President Duterte has requested for martial law in Mindanao.
— Philstar

Palace to address security concerns before it allows entry of China Telecom
Malacañang on Tuesday vowed to look into security concerns raised over the entry of a Chinese telecommunications company intended to challenge the duopoly of local players Globe Telecom Inc. and PLDT Inc.
— BusinessMirror

‘Workers must get full service charge’
The Senate has approved a bill that will allow employees of hotels and restaurants to get 100 percent of the service charge collected from customers.
— Philstar

Duterte to lead destruction of seized Maute firearms
President Rodrigo Duterte will lead the destruction of around 400 weapons captured and recovered during the five-month battle to liberate Marawi City from the clutches of the Maute Group terrorists.
— Update Philippines

Uber offers tech platform to guide PH infra programs
Ride-hailing company Uber is offering its technology to the Philippine government for use in optimizing infrastructure plans.
— The Manila Times

BOC seizes P83-M smuggled rice in Cebu, P57.5-M shabu at NAIA
The Bureau of Customs (BOC) in the Port of Cebu seized P83.3 million in premium rice from China which was misdeclared as ceramic tiles.
— Manila Bulletin