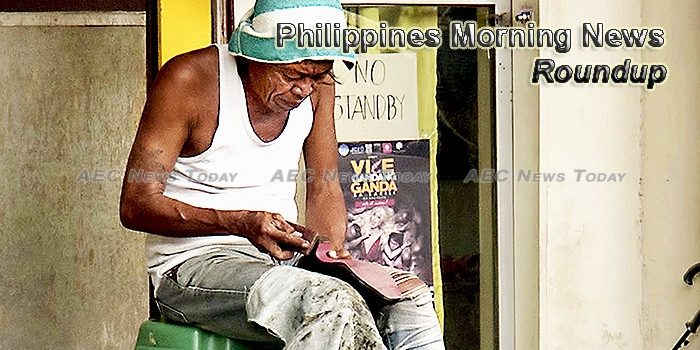 Duterte renews his anti-West, pro-China views
Philippine President Rodrigo Duterte delivered his second State of the Nation Address (SONA) with characteristic fire, lashing out at his critics and vowing to continue his brutal crackdown on illegal drugs despite widespread international condemnation.
— Asia Times

PH shares close above 8,000 for 1st time in 11 months
Philippine shares set a new high for 2017, with the Philippine Stock Exchange (PSE) index closing at its highest level in 11 months. Real estate and oil exploration led the way.
— ABS-CBN (video)

Peso drops on strong US data ahead of Fed decision
THE PESO weakened anew versus the dollar on Wednesday due to upbeat US economic reports and as investors stayed on the sidelines ahead of the close of the Federal Reserve’s policy meeting.
— BusinessWorld Online

PetroEnergy sees 33% more profit on shift to renewables
PetroEnergy Resources Corp. (PERC) expects its profit to grow by about 33 percent this year on higher electricity sales as it shifts from oil and gas exploration to renewable energy production, company officials said yesterday.
— The Philippine Star

Marawi rehab cost balloons to P20B
THE Duterte administration will spend as much as P20 billion for the rehabilitation of Marawi City in Lanao del Sur, which has been under siege by terrorists from the Maute group since May 23.
— The Manila Online

Congress fast-tracking PHL shift to federalism
In the absence of the 25-man constitutional commission (Con-com), the leadership of the 17th Congress on Wednesday agreed to create a technical working group (TWG) that will draft the proposed revisions to the 1987 Constitution to hasten the shift to federalism.
— Business Mirror

Casinos’ inclusion in dirty-money surveillance alone not enough to keep PHL out of blacklist
THE RECENT INCLUSION of casinos under the watch of the Anti-Money Laundering Council (AMLC) does not automatically assure that the Philippines has completely cured its deficiency in curbing dirty money flows.
— BusinessWorld Online

Top business leaders give families of fallen Marawi troopers P1.25M each
The families of the fallen government troops in Marawi City have received at least P1.25 million each in donation from the country’s top businessmen.
— Manila Bulletin

Govt debt up 7.9% at P6.41T in June
NATIONAL government debt rose to P6.41 trillion in June as the government issued more securities and the peso continued to trade weaker against the dollar, the Bureau of the Treasury (BTr) said on Wednesday.
— The Manila Online

Fitch sees PH growth avg at 6.6% in 5 yrs
DEBT watcher Fitch Ratings said Philippine economic growth in the next five years could average above percent as the country continued to hold strong external position and macroeconomic fundamentals.
— The Manila Online

Fastest-rising Manila properties are from sea-reclaimed land
IN MANILA, the crowded Philippine capital of more than 12 million inhabitants, land that was reclaimed from the sea is selling like hot cakes. Real estate values in the Manila Bay area, home to casinos like City of Dreams Manila and Solaire Resort and Casino, are projected to rise 30% to as much as P250,000 ($4,900) a square meter by year-end, according to Colliers International.
— BusinessWorld Online

US donated 2 intel aircraft to help patrol vast PH waters
The Armed Forces of the Philippines (AFP) will use the two US donated Cessna 208B “Caravan” aircraft, which are fitted with intelligence, surveillance, and reconnaissance (ISR), to patrol the country’s vast maritime domains and borders, AFP spokesperson Brig. Gen. Restito Padilla said on Wednesday.
— Update Philippines

Philippines to consult ASEAN on joint China sea oil search
The Philippines tried on Wednesday (Jul 26) to reassure Southeast Asian neighbours about its proposal to partner with Beijing in oil exploration in the disputed South China Sea, promising to consult them on any plans.
— Channel NewsAsia

Holcim Philippines to invest $54M in next 2 years
HOLCIM Philippines, Inc. is investing $54 million over the next two years to increase its capacity in order to support the government’s flagship infrastructure projects.
— BusinessWorld Online

Land distribution, social reforms at stake in terminated GRP-NDFP talks
A week before President Rodrigo Duterte delivered his second State of the Nation Address, negotiators were engaged on a table battle to discuss reforms which would hopefully end the armed conflict.
— Davao Today

Cambodia Morning News For May 22