By Maria Mirasol Rasonable on September 18, 2018 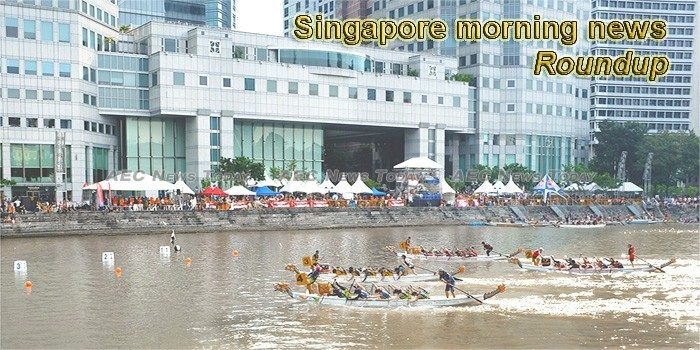 Universal QR code SGQR ready for commercial use
A universal QR code which allows consumers to scan and transfer funds from as many as 27 e-payment apps was launched yesterday, marking a significant step in Singapore’s drive to build a national cashless system.
— The New Paper

F&B tenants get creative with limited space amidst skyrocketing costs
Running an F&B business in ultra-expensive Singapore is no easy task with skyrocketing costs prompting a growing number of players to share more than just ideas as they also embrace shared commercial spaces in a bid to outwit the city’s high-cost retail environment.
— Singapore Business Review

‘Spent’ Hamilton soaks up special victory in Singapore
Lewis Hamilton felt a mixture of elation and exhaustion after converting his stunning pole position into a victory at the Singapore Grand Prix on Sunday as the Briton tightened his grip on a fifth Formula One world championship title.
— Reuters

Halimah starts two-day visit to KL today
She will meet the Singaporean community in Kuala Lumpur at a reception hosted by the Singapore High Commission.
— The New Paper

Private home sales down 64 per cent last month
Developers in Singapore sold 616 private homes last month, making for a 64.3 per cent fall from the 1,724 units they moved in July and a 50.6 per cent drop from the 1,246 units booked in August last year.
— The New Paper

Laguna Park up for en bloc sale at $1.48b
Laguna Park in Marine Parade Road is up for collective sale for $1.48b, Knight Frank revealed.
— Singapore Business Review

Fish & Co is halal-certified again
However, it said it was still complying with halal standards at the time, while HalalHub Consultants, the halal certification consultant engaged by the chain, said it was then in the process of submitting a new application to the Islamic Religious Council of Singapore (Muis).
— The New Paper

Response against abolition of section 377A, an emotional one. Govt’s role is to be logical and not pandering to emotions however strong
According to an on going Yahoo poll, it would appear that a majority of those surveyed do not think that more restrictions should be imposed on people smoking in their own homes.
— TOC

Mortgage growth for DBS could stay healthy despite property curbs
“Given the historical correlation between the FFR and 3-month Singapore Interbank Offered Rate (SIBOR), we expect further upside in the 3-month SIBOR (from 1.64% now).
— Singapore Business Review

Factually or half truths to sidestep actual salaries by PM and ministers? Why the lack of transparency?
In a post published on the Factually website, the Singapore government seeks to address two “falsehoods”, one being the Prime Minister gets $4.5 million in annual salary and it is not upfront about how ministerial salaries are calculated.
— TOC

Singapore Grand Prix helps drive up hotels’ occupancy rates
It is turning out to be an encouraging year for hotels here, with occupancy rates higher than they have been over the last four years. And the fillip is being felt during the Formula One (F1) period.
— The Straits Times