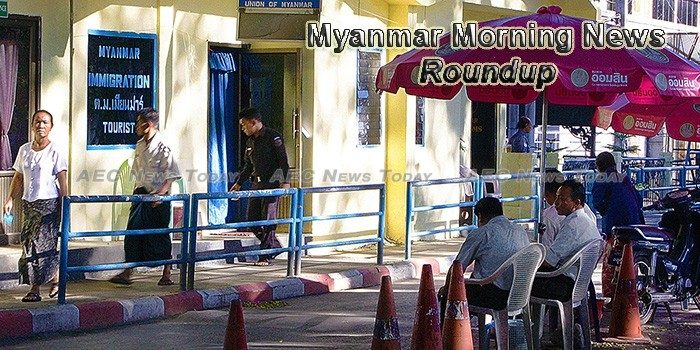 Ethnic Militias Decide Not to Sign Myanmar Government’s Cease-fire Agreement
A group of ethnic militias decided on Friday not to sign the Myanmar government’s nationwide peace pact on the last day of their three-day summit at the headquarters of the country’s strongest ethnic rebel force, but instead formed a committee to discuss a “new path to peace,” a military official from the conference said.
— Radio Free Asia

Law needed to regulate Thai investors’ abuses abroad: Thai, Myanmar groups
COMMUNITY groups in Thailand and Myanmar have urged protection of human rights and prevention of environmental impacts – after Thai entrepreneurs were reported to have carried out abusive and environmentally damaging acts in neighbouring countries.
— The Nation

Crackdown launched on Chinese eggs
The Customs Department says it will take action against those who import illegal eggs from China.
— Eleven

Far Right-Wingers Burn Down Rohingya Refugee Huts in India’s Jammu
Members of a far right-wing Hindu political party burned down at least five Rohingya Refugee camps in Jammu state of India in two separate incidents respectively on Sunday and Monday, it has been reported.
— Rohingya Vision

Myanmar should regulate labor unions to help attract more Chinese investment
Over the weekend, some Chinese netizens vented their anger over an incident in Myanmar, in which hundreds of local strikers attacked a Chinese garment factory and briefly detained seven Chinese employees. The Myanmar government needs to restrict the power of local labor unions according to relevant laws to better protect foreign investors’ legitimate rights.
— Global Times

80% of Rakhine gas goes to China
A report called “Myanmar’s natural resources ownership, management, income sharing and impact” carried out by the Ethnic Nationalities Affairs Centre says the Shwe natural gas project off the Rakhine coast has a daily natural gas production capacity of 500 million cubic feet and 80 per cent of it will be exported to China for 30 years.
— Eleven

Phone remittances in the pipeline
The Central Bank of Myanmar is planning to grant foreign remittance licences, according to its vice-governor Set Aung.
— Eleven

Govt neglects land disputes at its peril
Land disputes remain one of the many problems still to be cracked in Myanmar. Many farmers end up in court and jail after their land is seized. This week about 350 farmers from Pyin Oo Lwin, Patheingyi, Mattara, Sintgu, Thabeikgyin, Myithar, Nganzun and Sintgyaing townships in Mandalay Region faced legal action over land disputes. Residents demonstrated on February 24 in Mandalay, demanding the government take immediate action on land disputes and drop cases against the farmers. They called for the return of seized land or proper compensation.
— Eleven

Government to clamp down on sale of fake cooking oils
The government will take legal action against those found to be selling fake cooking oils from March, said U Kyaw Win, Union Minister for Planning and Finance.
— Myanmar Times