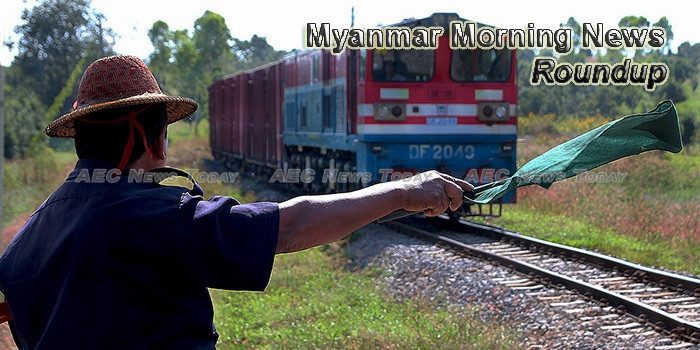 There’s only one conclusion on the Rohingya in Myanmar: It’s genocide
The Rohingya crisis in Myanmar is now widely described as ethnic cleansing. But the situation has been evolving. And now, it seems, we can no longer avoid the conclusion we have all been dreading. This is a genocide. And we, in the international community, must recognize it as such.
— CNN (video)

Myanmar approves over $4bn FDI in first half of current fiscal
MYANMAR has approved US$4.35 billion (Bt145 billion) in foreign direct investment (FDI) in the first six months of fiscal year 2017-18 which started April 1, and hopes to receive much more in the second half, according to San Myint, deputy director general at the Directorate of Investment and Company Administration.
— Eleven Myanmar

Nations pledge $345 million to Rohingya response
Nations have pledged $345 million (294 million euros) to care for Myanmar’s Rohingya refugees in Bangladesh, an “encouraging” step in the response to the intensifying crisis, the UN said Monday.
— The Jakarta Post

WB maintains optimism over Myanmar economy despite risks
Yangon-Despite the slowdown in the inflow of foreign direct investment and ongoing conflicts in Rakhine state, Myanmar’s economy is expected to recover this year, with the growth rate rising from 5.9 per cent in 2016 to 6.4 per cent, according to a recent edition of the World Bank’s Myanmar Economic Monitor.
— Eleven Myamar

Myanmar expelled N. Korean diplomat in June over role in weapons exports
A newly released UN report has revealed that earlier this year, the Myanmar government expelled a North Korean diplomat who was linked to a company subject to UN Security Council sanctions.
— Coconut Yangon

Special envoy Bob Rae headed to Myanmar next week
Canada’s new special envoy to Myanmar is heading to the region next week, months into a humanitarian crisis that has reportedly displaced close to a million Rohingya Muslims.
— CBC

Myanmar youth urged to pursue study opportunities abroad
Young university students have been urged to consider higher education opportunities outside of Myanmar and bring their expertise back to the country at a networking event in the commercial capital.
— Frontier Myanmar

11th Indo-Myanmar RBC Meet at Imphal
Date : 25th to 29th October, 2017
Under the leadership of Prime Minister Shri Narender Modi, India has made significant progress on her ‘Act East Policy’. The policy focusses on the extended neighbourhood in the Asia-Pacific region.
— E-Pao

Yangon factories told to treat water or else
The government warned factories to treat their wastewater properly before disposing it into rivers or face penalties, including closure of their facilities.
— Myanmar Times

Launch of Vital Registration Manual – a critical step towards fulfilling the rights of every child in Myanmar [EN/MY]
One of the major milestones on the road to universal birth registration in Myanmar was achieved today with the launch of a revised Manual aimed at simplifying the registration process for births and deaths.
— Relief Web