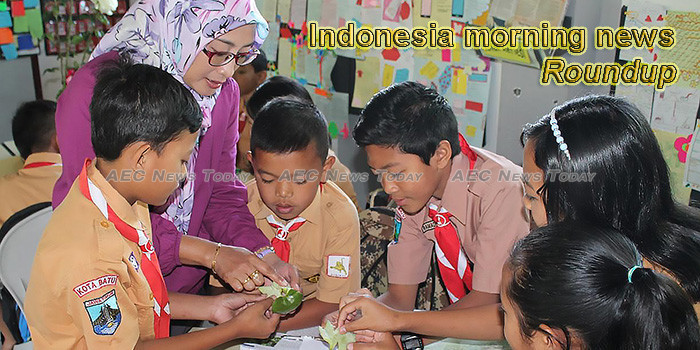 335 lawmakers absent from plenary session a day after their inauguration
Indonesia’s newly appointed legislators don’t seem to be trying to at least pretend that they care about representing the people, even when all eyes are still on them on the first days of their job.
— Coconuts

Indonesia’s largest power plant on schedule to operate next year
A 2,000-megawatt coal-fired power plant tipped as the largest project of its kind in Southeast Asia is on track to kick off commercial operations next year “Right now, the Batang power plant has been 83 percent completed.
— The Jakarta Post

Indonesia accuses two Singaporeans over imported plastic waste
Indonesia is accusing two Singaporeans of importing 87 containers of plastic scrap without the correct permits, an official said on Thursday (Oct 3), marking a step up in the country’s efforts to crack down on shipments of foreign waste.
— Channel NewsAsia (very annoying popups)

‘Don’t sell it cheap’: Komodo Island targeted at ‘premium’ tourists
The next time you visit Komodo Island in the Komodo National Park you might be shocked by the admission fee.
— The Jakarta Post

Centuries-old gold, jewelry from Sriwijaya era reportedly unearthed on burnt peatland
After months of being choked by haze from land and forest fires, residents of Ogan Komering Ilir in South Sumatra seem to have literally struck gold after they recently unearthed ancient treasure on land that had been cleared by burning.
— The Jakarta Post

Did the media hijack Indonesia’s student protests?
Students in Indonesia have been protesting on the streets since late September. Many observers have referred to the protests as “the largest student movement since 1998”.
— The Asean Post

Detained IPB Lecturer Made Real Bombs, Not Molotov Cocktails, Police Say
A lecturer of Bogor Agricultural University, or IPB, in West Java who is currently detained for illegal possession of explosives, had allegedly recruited and paid people to make bombs, not just Molotov cocktails as reported earlier, police said on Thursday.
— Jakarta Globe

Wamena Riot Refugees Suffer Diarrhea, Skin Disease at Camp
A number of residents, who are being evacuated from Jayawijaya, Papua due to Wamena riot, are starting to suffer from diarrhea and skin disease at the refugee camps.
— Tempo.co

Wanted: Designs for Indonesia’s new smart, green capital city
Public Works and Housing Ministry has officially opened a design contest for the country’s new capital city in the eastern part of Borneo, offering a total prize worth Rp 5 billion (US$353,490) for five winners who can outline the best concept for a “smart, forest city”.
— The Jakarta Post

Indonesian lawmaker Lora Fadil steals spotlight after photo with his 3 wives went viral; later caught dozing during plenary session
When 575 lawmakers were sworn in to represent the people at the House of Representatives (DPR) on Tuesday, one of them clearly stood out for representing a controversial yet commonly accepted aspect of Indonesian life: polygamy.
— Coconuts

23 companies line up for IPO amid global economic slowdown, bearish market
Unfavorable global economic conditions have not seemed to deter companies from entering the country’s stock market, with some having announced their plans to list their shares on the Indonesia Stock Exchange (IDX) later this year.
— The Jakarta Post

Bulog accuses ‘mafia’ of manipulating rice for the poor
Circling a sack of rice in front of a house in Central Java, five women winced as one of them cupped her hands to scoop up a sample of the contents and brought it to her nose.
— The Jakarta Post

Adopted, yet ignored: Hybrid structure offers hope for sinking villages
Forty-six-year-old Mat Sairi from Timbulsloko village in Demak regency has been worried for several years that one day he will lose his fish pond as a result of massive coastal erosion that has been consuming the village inch by inch for the last 20 years.
— The Jakarta Post

One year after tsunami: Palu temporary houses pose higher risk of sexual violence
Laras (not her real name) sat on a wooden chair on the small front porch of her temporary housing unit in Petobo village, Central Sulawesi.
— The Jakarta Post

Jakarta tap water drying up after months of drought
Residents of Pegadungan village, Kalideres district, West Jakarta, take extra measures to obtain water as the drought continues to plague Jakarta. Desy, 50, who lives in community unit (RW) 09 in Pegadungan, said she had stayed up late every night for the last two months to fill up water tubs in her house.
— The Jakarta Post

Environment Agency employees take the lead with ‘bike to work Fridays’
The Jakarta Environment Agency has recently issued a policy that requires its employees to commute by bicycle or public transportation on Fridays. Yogi, who works at the agency, expressed his support for the new policy, which aimed to curb air pollution and traffic congestion in the capital.
— The Jakarta Post

PDI-P gives blessing for Golkar’s Bambang in MPR race — but with conditions
The Indonesian Democratic Party of Struggle (PDI-P), the largest party in the House of Representatives and President Joko “Jokowi” Widodo’s coalition leader, has decided to throw its support behind Bambang Soesatyo of the Golkar Party in the race for the People’s Consultative Assembly (MPR) speaker post.
— The Jakarta Post

Advocacy groups report police’s handling of protesters to human rights commission
Public advocacy groups united under the Democracy Advocacy Team filed reports they had gathered in relation to the police’s alleged repressive measures against demonstrators that took part in a series of protests in Jakarta recently to the National Commission on Human Rights (Komnas HAM) on Wednesday, demanding the commission launch an investigation into the matter.
— The Jakarta Post

Baswedan calls off trip to attend C40 Summit in Copenhagen
Governor of Jakarta Anies Baswedan has abandoned his planned trip to Copenhagen, Denmark, to attend the C40 Summit, based on the current inconducive situation in the capital city following students’ protests against several controversial bills.
— Antara News

‘It was not my intention to hurt Mollucans’: Wiranto on earthquake victims
Coordinating Political, Legal and Security Affairs Minister Wiranto has clarified that it was not his intention to hurt Ambon residents with his statement related to earthquakes that hit the region on Sept. 26,
— The Jakarta Post

Jokowi expresses heartfelt gratitude to ministers, institution heads
President Joko Widodo (Jokowi), due to shortly end his first term of office, was thankful to ministers and heads of non-ministerial government institutions in the Working Cabinet for the 2014-2019 period.
— Antara News

All Detained Student Protesters Sent Home, Police Claim
The Metro Jaya Police claims to have sent home each and every high schooler and college students who were nabbed in police’s massive detainment following the students’ street protest on September 30.
— Tempo.co

Woman, affair partner allegedly hire hitmen to murder husband
The Kelapa Gading Police have arrested a woman and a man with whom she had an affair for allegedly scheming a murder attempt against her husband in North Jakarta last month.
— The Jakarta Post