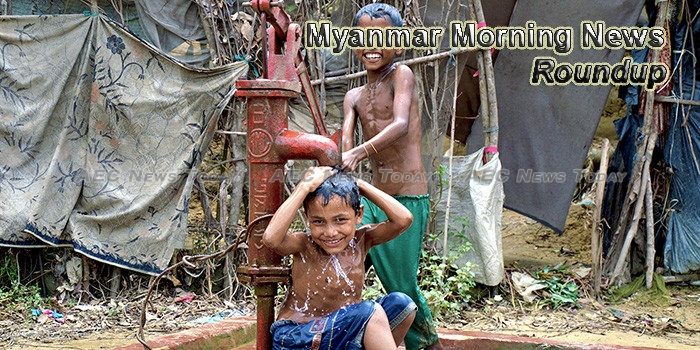 Drought may destroy summer paddy
Summer paddy crop grown in Pwintphyu and Salin townships in the Magwe Region may be damaged if it does not rain until the end of the month, said farmers last Thursday.
– The Myanmar Times

SCB’s aim remains high in Myanmar
ALTHOUGH Siam Commercial Bank is yet to get a foreign-bank licence in Myanmar, it has broadened its support to banking professionals in that country, according to Kamalkant Agarwal, head of international banking at SCB.
— The Nation

Myanmar, having warmed to the West, turns to China again
Myanmar was supposed to turn away from China and toward the West when the United States helped the Southeast Asian country make the transition to a civilian government after five decades of military rule.
— Business Mirror

Mobile Myanmar opens up to brands
Myanmar has a consumer landscape that is less developed than other markets in Southeast Asia, yet the country’s youthful population and growing access to the outside world makes it an exciting opportunity for brands, according to an agency specialist.
— Warc

In Myanmar, a Lake That Sustained Generations Feels Strains
Cresting a mountain pass on a freshly bulldozed road, Indawgyi Lake and its valley appear below, pastoral and calm.
— New York Times

China dominates clothing sector
More than US$67 million in foreign investment was put into cut-make-pack clothing factories so far this financial year, according to the Directorate of Investment and Companies Administration (DICA).
— Eleven Myanmar

Vertiv eyes expansion in Myanmar after rebranding
VERTIV, formerly Emerson Network Power, a global technology provider which supports mobile and cloud computing markets with power, thermal and infrastructure management solutions, is set for business expansion in Myanmar with the launch under its new branding on Friday.
– The Nation

Myanmar’s hard road to democracy
In July 2012, two years after her release from house arrest, Aung San Suu Kyi delivered her maiden speech to Myanmar’s parliament. Then opposition leader, she used the opportunity to voice concern about ethnic disunity and continuing civil war — a concern that has consumed the people of Myanmar since the unifying Panglong Agreement reached under her father, Aung San, fell to pieces in the late-1940s.
— East Asia Forum

Regional FDA branches to check bottled water
The Food and Drug Administration (FDA) has delegated the authority to license drinking water manufacturing to its regional branches to boost the speed of the process.
— Eleven Myanmar

Foreign tourists flock to Tachileik border
More than 4,000 foreign tourists entered Myanmar through Tachileik, Shan State, since April 1, according to the Ministry of Hotels and Tourism.
— Eleven Myanmar

MP wants damaged roads repaired
Heavy vehicles, especially lorries, plying to and fro from cement factories in the Kyaukse township, Mandalay Region, have resulted in damage along some parts of the roads.
— Myanmar Times