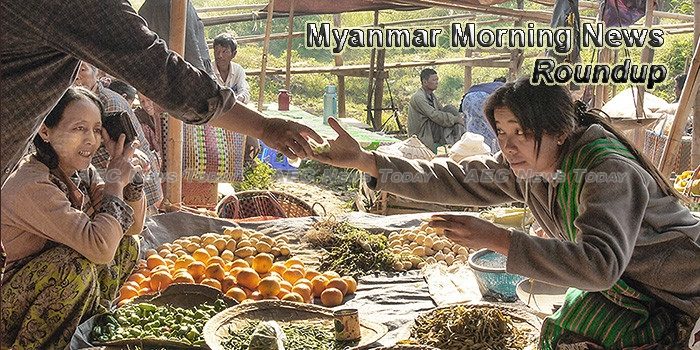 Myanmar Journalists Band Together to Fight Law Used to Attack Press Freedom
More than 100 Myanmar journalists gathered on Tuesday in Yangon to call on the government to drop lawsuits filed against reporters under controversial Article 66(d) of the country’s Telecommunications Law frequently used by those in powerful positions to silence their critics.
— Radio Free Asia

Demand for elephant skin driving up poaching in Myanmar (warning: graphic images)
In addition to targeting wild elephants for their tusks, poachers are now killing elephants for their skin. The hide is reportedly being used for traditional medicine or is being turned into jewellery.
— Mongabay.com

Canada must demand human rights for Rohingya in Myanmar
Aung San Suu Kyi, who was honoured by Canada for her own courage and determination during 15 years of imprisonment under the despotism of Burma’s previous military rulers, has refused to speak up for her country’s Rohingya minority for fear of antagonizing Buddhist nationalists.
— Toronto Star

Finance Minister Predicts ‘Take Off’ for Burma Economy
The finance minister attempted to reassure investors that Burma’s economy is on a promising trajectory at a trade conference on Tuesday, despite business owners’ concerns that the economy has become tepid.
— The Irrawaddy

Thousands of rodents swarm Myanmar villages
Thousands of rats have descended on villages on an island in southern Myanmar, a local official said on Tuesday, in what some have taken to be an ill omen of impending disaster.
— The Star Online

Myanmar’s edible bird nest industry comes home to roost
The cries of amorous swiftlets echo around the dark room, an unlikely gold mine for traders in southern Myanmar who are cashing in on rising demand for the edible nests from China’s growing middle class.
— Coconuts Yangon

Inle Lake conservation bill to go to Hluttaw
A bill for the environmental conservation of Inle Lake will be submitted to the Pyithu Hluttaw. There have been five rounds of discussions about the bill with many stakeholders participating, a civil society representative told The Myanmar Times.
— Myanmar Times

Job agencies appeal ban on workers going to Malaysia
The Myanmar Overseas Employment Agencies Federation (MOEAF) appealed to the Ministry of Labour, Immigration and Population last week to allow it to send 8000 Myanmar workers to employers in Malaysia.
— Myanmar Times

Journalists Launch Campaign, Call for Termination of Article 66(d)
More than 100 journalists in Rangoon demanded on Tuesday that the government withdraw lawsuits filed against reporters under the country’s controversial Article 66(d) of the Telecommunications Law.
— The Irrawaddy