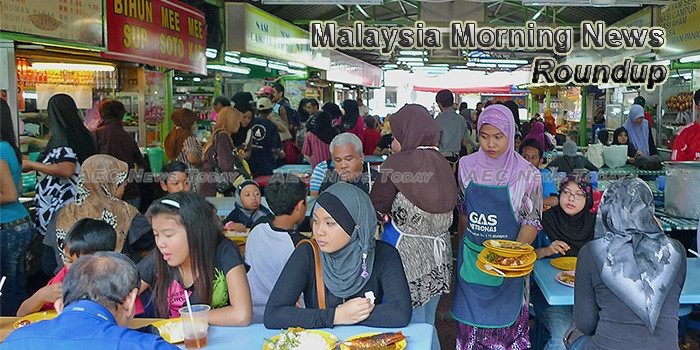 Malaysia, Indonesia May Take EU Plan to Curb Palm Oil Imports to WTO
Malaysia and Indonesia plan to raise the prospect of European Union curbs on the imports of palm oil with the World Trade Organisation, both countries said in a joint statement on Sunday.
— The New York Times

Can the uptrend in Malaysia’s manufacturing sector hold up?
WITH the continuous uptrend in manufacturing, a question at this point is whether this can hold up for the long term. Views range from positive to uncertain, indicating that investors may have to look selectively at the various segments of manufacturing.
— The Star Online

Malaysia takes lead in developing, promoting SRI
Malaysia, widely acknowledged as being in the forefront of Islamic finance, is taking the lead in promoting the sustainable and responsible investing (SRI) proposition based on its shared values with Islamic finance.
— The Borneo Post

M’sian companies generally unprepared for cyber attacks
While a majority of the surveyed Malaysian companies believe that cyber security is important and seek guidance from IT security experts, almost all (96 per cent) of them are only in the early stages of security preparedness, according to a survey jointly conducted by Quann, a leading Managed Security Services Provider in Asia Pacific, and research firm IDC.
— The Borneo Post

Expat minister says no more workers to be detained in Malaysia till Dec
Expatriates’ welfare and overseas employment minister Nurul Islam said Malaysia authorities would not detain any Bangladeshi workers until December as Dhaka and Kuala Lumpur agreed in solving the illegal workers’ issue though discussions.
— Prothom Alo

Malaysia won’t block access to Telegram: DPM (Updated)
Malaysia does not plan to block access to mass-messaging service Telegram amid security concerns in some countries, such as Indonesia.
— The Sun Daily

New honor 8 Pro features breakthrough speed and performance
Honor Malaysia has announced the launch of its super smartphone, the honor 8 Pro, which boasts maximum performance in a minimalist package, the stunning new device sets the standard in every way – with cutting-edge processing power, long lasting battery life, 5.7-inch Quad HD display and a dual-lens camera all packed into an impossibly thin 6.97mm body.
— The Borneo Post

480 claim housing developer cheated them of RM2.7 million
An Indian community NGO has advised those allegedly cheated by a property developer to hold on to the cheques they had been given as reimbursements.
— Free Malaysia Today

Amidst Crackdown, 79 Migrant Workers Arrested in Malaysia
About 30 Cambodians have been seeking refuge at the Cambodian Embassy in Kuala Lumpur, while 79 have been arrested since a crackdown by Malaysian authorities on undocumented migrant workers began earlier this month, the Foreign Affairs Ministry said on Friday.
— The Cambodia Daily (paywall)

Hypermarket loses RM250,000 kept in safe
A hypermarket lost its collections of about RM250,000 after its office at Cayman 2 Complex was broken into today.
— Free Malaysia Today

Coding Sarawak’s own digital economy
Less than three decades ago, going digital for most businesses meant merely investing in one or two expensive computers for a select few employees to enter data into. Documents and data were still mostly recorded physically until it came time for data entry clerks to archive them onto the now obsolete floppy disk.
— The Borneo Post