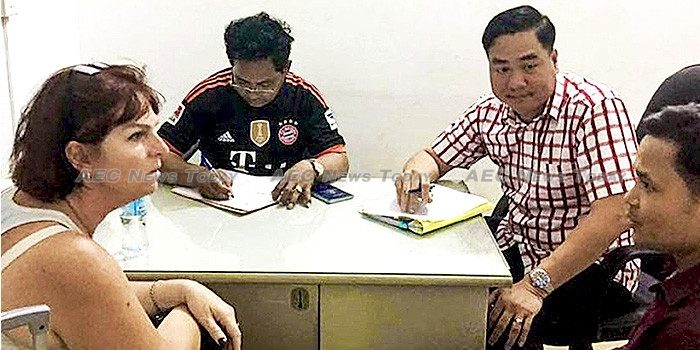 A Cambodian defence attorney has called for the current ban on commercial surrogacy in Cambodia to be abolished ‘because the people are poor’, adding ‘it is not wrong to just bear a baby for another’. A second defence attorney pleaded that his clients were being prosecuted for acts committed before there was a law prohibiting the practice.

The call for the prohibition on commercial surrogacy in Cambodia to be lifted came during the trial of Australian nurse Tammy Davis-Charles and two others at the Phnom Penh Municipal Court yesterday, July 17.

The three are charged with being intermediaries between an adoptive parent and a pregnant woman, and fraudulently obtaining documents such as birth certificates. The charges carry a combined maximum penalty of two years and six months.

Cambodia Health Minister, Mam Bunheng, issued a prakas (ministerial directive) banning the practice last October. Making no mention of penalties, the prakas simply states: ‘Surrogacy, one of a set of services to have a baby by Assisted Reproductive Technology, is banned completely’. Under Cambodia law a prakas must relate to a law, but a law on commercial surrogacy in Cambodia is yet to be drafted.

According to a report in The Phnom Penh Post, Ms Davis-Charles told the court yesterday that she was merely a nurse employed by ‘Sy Management’, which Davis-Charles said was headed by an Australian man, Sun Hien Ly, A search by AEC News Today has been unable to verify the existence of such a company involved in commercial surrogacy.

During yesterday’s hearing Ms Davis-Charles is reported to have told the court that DNA tests proved that there was no blood relationship between the surrogates and the babies. She is also reportedly told the court that of 23 surrogate mothers she was assigned to monitor, all bar one had carried through to full term. One had miscarried, she reportedly said.

Defence attorney for Ms Davies-Charles, Chheang Sophorn, reportedly told the court yesterday that most of the work was done prior to the prakas being issued. It was unfair for them to be prosecuted for activities carried out before the prakas was issued, The Phnom Penh Post reported Mr Chheang saying.

According to the report, Ms Davies-Charles told the court she had lost 20kg (about 44 lbs) since being incarcerated and that cancer in her left eye had caused her eyesight to deteriorate badly. Ms Samrith , told the court she shouldn’t even be there, she had stopped working for Ms Davies-Charles four months prior to her arrest to give birth to her own baby, while Mr Penh reportedly said: ‘The women (surrogates) came voluntarily, I did not persuade them’.

The government has implemented an amnesty until January 28, 2018 enabling the parents of babies born by surrogate Cambodia mothers to leave the country upon satisfying the courts of the babies parentage. The Phnom Penh Municipal Court will issue its verdict in the case on August 3.

Update: This story was last updated at 14:12pm on July 22, 2017: The photo caption in the original version of this story incorrectly identified Families through Surrogacy as having been Bangkok based. It is in fact registered in NSW, Australia. It is Ms Davis-Charles’ Fertility Solutions PGD which claims to be a Bangkok-based identity.