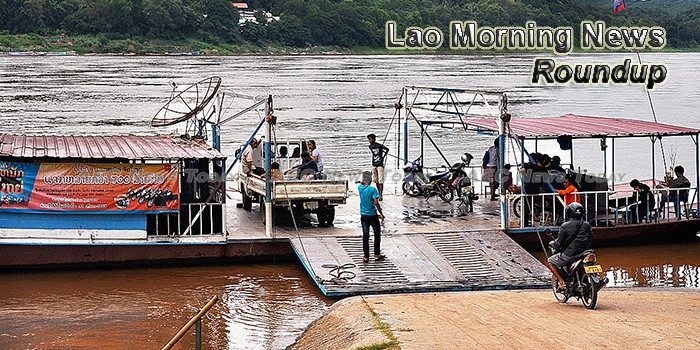 VUFO vows to work for stronger Vietnam-Laos ties
The Vietnam Union of Friendship Organisations (VUFO), the Vietnam-Laos Friendship Association and its chapters at all levels will continue trying their utmost to nurture the friendship and special solidarity between the two countries, said a VUFO official.
— Vietnam Plus

That Luang restoration on track for November completion
Vientiane authorities are accelerating the renovation of the That Luang Stupa, aiming to complete the project before the annual That Luang festival in November.
— Vientiane Times

Lack of facilities prevent adequate treatment of chemical waste
The correct treatment of potentially harmful chemical waste is proving to be a challenge in fulfilling the Law on Chemical Management, and large sums of money will be needed to effectively achieve this.
— Vientiane Times

Vietnam, Laos step up religious cooperation
The Government Committee for Religious Affairs (GCRA) and the Lao Front for National Construction (LFNC) will increase delegation exchanges and cooperation in training officials in charge of religious work while supporting the two countries’ Buddhist Sanghas in conducting their activities.
— Vietnam Plus

NA Chairwoman receives Lao officials
She made the statement at a reception for Somphan Phengkhammy, a Party Central Committee member, Vice National Assembly Chairman and President of the Committee for Peace and Solidarity of Laos in Ha Noi yesterday.
— Vietnam Net

Breastfeeding Code Decree Drafting Debated
Over 50 representatives from the Ministry of Health, the United Nations Children’s Fund and the World Health Organisation are discussing a national breastfeeding code decree drafting at a meeting held in Vientiane on Aug 22-25.
— Lao News Agency

Australian Minister to Reaffirm Strategic Ties
Australia and the Lao PDR will look to build on their long-standing defence cooperation when Vientiane hosts the first ever visit by an Australian Minister for Defence on 24 August.
— Lao News Agency

Laos Moves to Restrict ‘Disordered’ Lottery System
Government authorities in Laos are moving to restrict informal and illegal lotteries in the one-party communist state, with one high-placed police source calling the situation at present “disordered” and “antisocial.”
— Radio Free Asia

Laos Is Illegally Selling Its Last Wild Elephants to China! Sign Petition to Stop This
The world’s elephants are losing a vicious battle plagued upon by them by the greed of man. From the staggering rates of poaching for their tusks, skin, and body parts, to being violently beaten and exploited in tourist attractions like circuses and trekking expeditions, elephants are struggling to survive.
— One Green Planet

Breastfeeding Code Decree Drafting Debated
(KPL) Over 50 representatives from the Ministry of Health, the United Nations Children’s Fund and the World Health Organisation are discussing a national breastfeeding code decree drafting at a meeting held in Vientiane on Aug 22-25.
— Lao News Agency