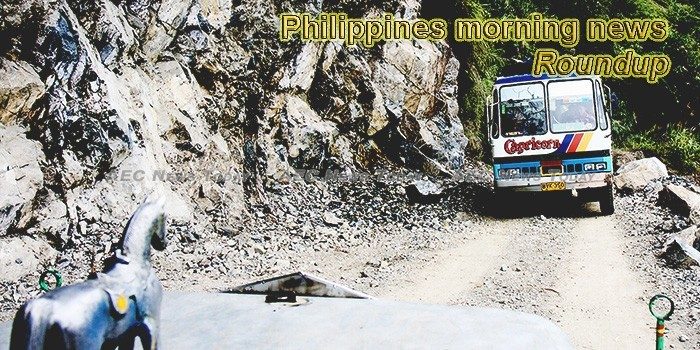 PHL seeks $1.96-B ADB funding for devt projects
THE Philippine government has proposed at least $1.96 billion worth of projects for financing by the Asian Development Bank (ADB) and other development partners.
— Business Mirror

Spain offers $300m worth of ODA for PH
The Spanish government offered $300 million worth of official development assistance to the Philippines for infrastructure, energy, food industry and tourism projects, the Finance Department said.
— Manilastandard.net

Debt prepayments hit $1.45 B in 1st half
Philippine borrowers–both the national government and the private sector — continued to prepay their foreign obligations resulting in the further weakening of the peso against the dollar, data from the Bangko Sentral ng Pilipinas (BSP) showed.
— The Philippine Star

Philippines caught in US-Russia tug-of-war over submarines
The Philippines appears to be caught between the United States and Russia over the plan of the Duterte administration to purchase big-ticket military equipment, including a submarine, from Moscow.
— The Philippine Star

Only P1.4B of P8-B fund for free tuition program used – CoA
THE Commission on Higher Education (CHEd) disbursed merely 18.11 percent or about P1.449 billion of the P8 billion allotted by the government in 2017 for the free tuition program.
— The Manila Times

Tawi-Tawi town gets P20 million from PRDP for seaweed project
The Philippine Rural Development Project (PRDP) has allocated about P20 million for the development of the marine industry in a town in the island province of Tawi-Tawi.
— BusinessWorld Online

PH, Nigeria bolster ties on trade, aquaculture, anti-drug trafficking
he Philippines and Nigeria have agreed to continue working together to enhance not only their economic and technical cooperation but also the collaboration in the fight against terrorism, illegal drugs and other areas.
— Philippine Canadian Inquirer

Oil, Gas Deal with Philippines Could Help China Politically
Experts say a plan for China and the Philippines to jointly explore oil and gas in the South China Sea could help China politically.
— Voice of America

Gov’t to reward well-performing schools, hospitals with incentives
The Department of Finance (DOF) said non-profit private schools and hospitals that perform well and adhere to high standards of service would continue to enjoy the current low income tax rate of 10 percent under the proposed corporate income tax reform bill.
— The Philippine Star

Asian Games: Thailand overwhelms returning Philippines in women’s volleyball
Regional power Thailand dealt the Philippine women’s volleyball team a sound beating on Sunday afternoon, scoring a 25-22, 25-12, 25-15 ripping of the Filipinos, who are playing in the Games for the first time in 36 years and clearly looked like they would need a lot of catching up to do.
— Philippine Daily Inquirer/ The Jakarta Post

Poland open doors for Filipino workers
Poland is in talks with the Philippines to bring in more Filipino workers to fill a labor shortage even as Warsaw continues to resist refugees and migrants from the Middle East and North Africa.
— Inquirer.net/Daily News Cebu

FCO Minister Mark Field to champion rules-based international system in Manila
The Minister of State for Asia and the Pacific is visiting Manila on the second leg of a 6-country tour of Southeast Asia.
— AEC News Today/ PR Newswire (media release)

San Miguel to invest P6 billion in 2 projects
San Miguel Corp., the country’s diversified conglomerate, is pouring roughly P6 billion into two new projects including a new manufacturing facility for “ready-to-eat” products, which are part of the company’s ambitious expansion projects for its food business.
— The Philippine Star

Duterte increases bounty for ‘ninja cops’ to P5-M
President Rodrigo Duterte on Friday increased the reward money for the head of each “ninja cop” to PHP5 million urging them to surrender in 48 hours.
— Northbound Philippines

Pangasinan town suffers P25-M agri losses in rains, flooding
The continuous rainfall in the province caused by weather disturbances that intensified the southwest monsoon has incurred PHP25 million losses in the agriculture industry of this town.
— Northbound Philippines

Duterte hits out at China over “nasty” words
President Rodrigo Duterte has called out China for shooing away a Philippine military aircraft over the disputed West Philippine Sea (South China Sea), according to the Manila Times Online report on Saturday.
— Thai PBS

Soft commodities hit record low with more losses seen for sugar
Soft commodities are getting hit by one blow after another, and some traders are predicting the worst is yet to come for sugar prices.
— Business Mirror

Philippines’ hollow victory over China
In an Asean multilateral meeting in Cambodia in 2012, the Philippines’ then-foreign secretary, Alberto del Rosario, found himself in an uncomfortable diplomatic situation.
— Bangkok Post

Gov’t to focus on supply solution, not tariff cuts
Realizing that tariffs of most commodities are already at minimal levels, the multi-government agency Committee on Tariff and Related Matters (CTRM) has proposed supply-side interventions to minimize the impact of inflation and lower the prices of agricultural commodities instead of further tariff cuts.
— Manila Bulletin

Finance officials set Beijing meeting to discuss infra fund
Filipino and Chinese officials are scheduled to meet in Beijing this week to address the issues and challenges in the financing of several ‘Build, Build, Build’ infrastructure projects in the Philippines.
— Manilastandard.net

Data privacy lifts IT spend
The National Privacy Commission (NPC) is seeking amendments to the Data Privacy Act (DPA) to enable the agency to slap fines on violators as a middle ground, according to privacy commissioner Raymund Liboro.
— Malaya