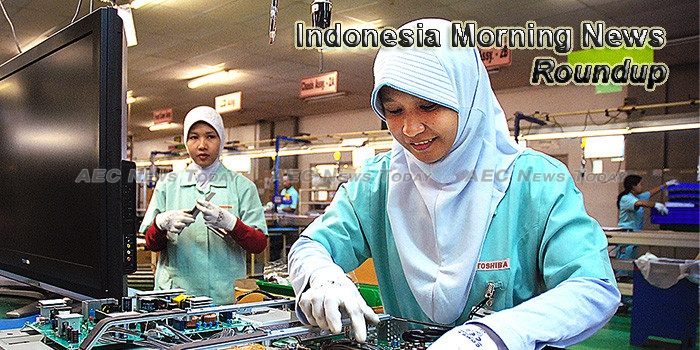 Indonesia stocks lower at close of trade; IDX Composite Index down 0.45%
Indonesia stocks were lower after the close on Wednesday, as losses in the Mining, Property and Infrastructure sectors led shares lower.
— Investing.com

Redenomination bill not to be deliberated this year
The government has to comprehensively disseminate information about the bill to avoid public misunderstanding that could lead to social unrest.
— The Jakarta Post

Indonesian, US Navy Complete Joint Exercise in Java, Bali
The Indonesian Navy and its United States counterpart completed a joint exercise and skills exchange with Indonesia on Wednesday (13/09) as part of a bilateral effort to deepen maritime security cooperation between the two countries.
— Jakarta Globe

Indonesia trade seen swinging back to a surplus in August
The median forecast of 13 analysts in poll was for an increase of 8.30 percent in exports in August from a year earlier. The poll also forecast an 8.30 percent rise for imports.
— Nasdaq

Indonesian central bank unveils policy to prevent financing for terrorism
The policy is aimed at supporting the government’s efforts to stop the flow of funds for financing terrorist activities, which have appeared amid progress in development of information technology.
— Xinhua

Win Streak May Continue For Indonesia Stocks
The global forecast for the Asian markets suggests mild upside, with support expected from the oil and technology sectors. The European and U.S. markets were up and the Asian bourses are expected to open in similar fashion.
— Nasdaq

This stock is well-placed to benefit from Indonesia’s gas-to-power initiative
OCBC Investment Research is maintaining its “buy” call on Keppel Corporation at a fair value estimate of S$7.36, on the notion that it is well positioned to benefit from opportunities in Indonesia’s small-scale liquefied natural gas (LNG) market.
— The Edge Markets

Indonesia Stops Gas Exports to South Korea, Taiwan in 2018
The reduced volume will open up the chance to improve the absorption of domestic gas.
— Tempo (EN)

Police arrest lawmaker over school arson attacks
A lawmaker in Indonesia’s Central Kalimantan province has been arrested for allegedly orchestrating a string of arson attacks on elementary schools.
— UCA News

Conservative Aceh Shows Limits of Saudi Investment in Indonesia
The province seems to have drawn a line in the sand to protect its own traditionalist — and quite conservative — Islamic culture against a puritanical Gulf ideology that seeks to return to the traditions of Koranic times.
— Voice of America