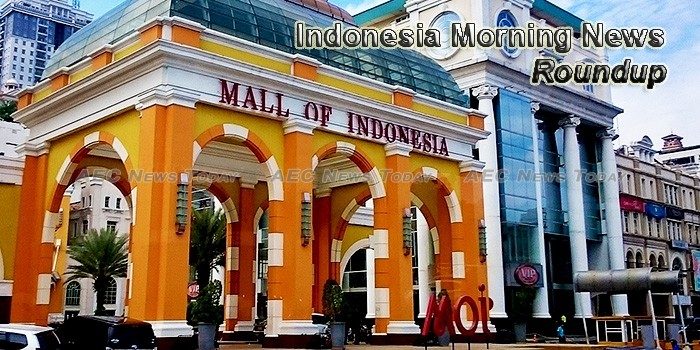 Challenges Ahead For Indonesia’s youth
Indonesia’s youth (pemuda) have always been valued as the vanguard of political change, taking a leading role in the independence revolution of the 1940s and in more recent regime changes in 1966 and 1998. With a half of Indonesia’s 240 million people aged under 30, Indonesia’s youth are the key to its future development.
— AEC News Today

Ongoing Uncertainty In Indonesia Weighs On Freeport’s Operations
Freeport-McMoRan’s ongoing standoff with the Indonesian government has adversely impacted its operations in Indonesia, with first quarter shipments expected to be lower than originally expected. Freeport reduced production levels by 60% in Indonesia towards the end of last month, as the company has been unable to export copper concentrate from the country since January, in the wake of changes to Indonesia’s mining regime.
— Forbes

Indonesia export, import growth slow down in February
Indonesia’s exports and imports expanded at a slower pace in February compared to a month earlier, as expected in a Reuters poll, data from the statistics bureau showed on Wednesday.
— CNBC

AboitizPower explores Myanmar, Indonesia amid PH power oversupply
With the Philippines experiencing an oversupply in power generation that could last up to 7 years, Aboitiz Power Corporation has set its sights on hydropower projects in Myanmar and Indonesia to continue growing its business.
— Rappler

Indonesia central bank to stand pat, on guard over outflows
Indonesia’s central bank is widely expected to keep its policy interest rate unchanged on Thursday to support growth while it guards against rising inflation and capital outflow pressures.
— Reuters

Singapore protests Indonesia’s move to detain its vessel, passengers
Singaporean government protested on Wednesday against Indonesia’s action to hold a vessel and detain passengers and crew within the city-state’s territory.
— The Jakarta Post

Indonesia Tobacco Bill Would Fire up Output Despite Health Fears
Indonesia’s parliament has proposed a draft law that could lead to a sharp increase in tobacco output in a country that is already a top producer with one of the heaviest rates of smoking in the world.
— The Jakarta Post

Jakarta’s Soekarno-Hatta voted ‘the world’s most improved airport’ in new Skytrax survey
Jakarta’s Soekarno-Hatta International Airport is obviously not the best airport in the world (that honor usually falls to Singapore’s Changi), but it has undoubtedly made a lot of progress in terms of improving its facilities lately.
— Coconuts Jakarta

Ride sharing fares to increase starting April 1 as gov’t enforces regulations to level playing field with regular taxis
Soon, your Uber/Grab/Go-Car ride may cost around the same as it would with a regular taxi.
— Coconuts Jakarta