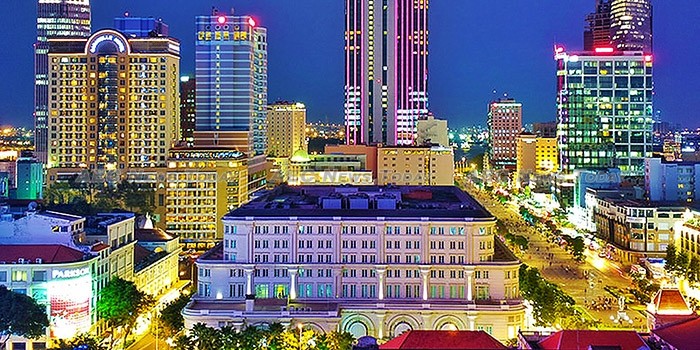 Ho Chi Minh City (HCMC) and Hanoi are Asean’s most dynamic cities. In the latest JLL City Momentum Index (CMI) the two Vietnamese cities, which rank second and eighth respectively globally, are the only two Asean cities to make the global top 30 dynamic cities list for 2017.

Tracking 134 metropolises and economic hubs around the globe, the annual CMI is compiled by JLL (Jones Lang LaSalle), an American professional services and investment management company specialising in real estate. Its stated aim is to identify change and highlight which cities or metropolitan areas may be best at positioning themselves to compete in today’s ever-changing economic landscape.

Ranking second globally behind India’s Bangalore, HCMC, along with Hanoi, owe their success to ‘favorable demographics and significant FDI as they take concrete steps to liberalize their business environments’, CMI 2017 says,

While this transition is at an early stage and congestion remains a serious impediment to the quality of life
and productivity levels which are needed to ensure future momentum, CMI 2017 says the two cities are making steady progress.

According to CM 2017 HCMC boasts low costs, rapid consumer market expansion and a transition towards higher-value activities driving significant levels of FDI, with the construction of office, retail and hotel stock meeting demand.

At the same time Hanoi, Vietnam’s capital, is seeing vigorous economic growth, with strong increases in population and incomes driving its retail and residential sectors. According to CMI 2017 the office sector is experiencing high levels of development, and real estate investment into the city reached exceptional levels in 2016, buoyed by a nearly US$400 million office deal.

However, CMI 2017 notes that a lack of world-class higher-education institutions and technology skills may slow the transition towards higher-value activities.

Commenting on this year’s CMI, Jeremy Kelly, JLL director of global research said, “despite various political upheavals and ongoing economic uncertainties, many cities continue to show impressive dynamism. Keys to their success are the agility and openness that enable them to adapt quickly to each new wave of global change.”

At the recent World Economic Forum (WEF) in Davos delegates heard that the “overriding factors that characterize the world’s most dynamic cities are technology and innovation — and cities that best absorb, adapt and leverage these drivers
come out on top.”

According to the WEF the two Vietnamese cities are regarded as “high potential” cities, which “continue to attract capital from foreign investors betting on their transition from low-wage manufacturing to high-value activities”.

In what must be one of the few of the thousands of lists compiled each year by organisation globally, CMI 2017 fails to mention regional heavyweight Singapore any where near the top, after having been ranked tenth in the 2014 City Momentum Index. While regarded as one of the world’s most competitive cities, the WEF says Singapore “has been hampered by moderated growth in its labour force and sluggish office and retail markets”.