Corporations to The Fore As Southern Thailand Floods Continue 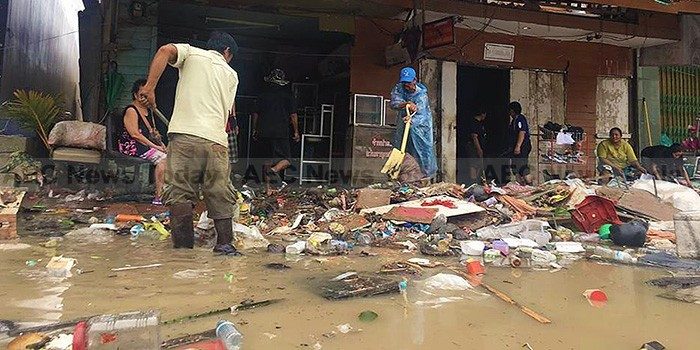 As the human and economic costs of the floods cutting a destructive path through Southern Thailand mount by the day large and small Thailand corporations are hastily juggling funds allocated to corporate social responsibility (CSR) programmes to see how they can help those most effected.

One of the Kingdom’s most prolific donors at times such as this is Honda Automobile (Thailand), who for the last two years has dominated Thailand’s passenger car market, claiming a 32.7 per cent share in 2016, up from 31.5 per cent from a year prior.

After its own manufacturing facilities were destroyed by flood waters in 2011 it established the Khiang Khang Thai Fund (HKKT Fund) to manage its various corporate social responsibility (CSR) programmes conducted by its various business units.

Funded by a small contribution from every Honda motor vehicle, motorbike, or piece of plant and machinery sold in the Kingdom, the HKKT Fund has become a familiar site to Thais at times of need, in addition to through its regular programmes.

As heavy rain sends flood waters inundating Southern Thailand for a third time, the HKKT Fund is the latest Thai organisation to dig deep to provide hope to those whose lives have been upturned.

Speaking during a ceremony in Bangkok during the week in which he handed over  700 high pressure washers worth Bt20 million ($565,000) and Bt10 million ($282,000) in cash to Thailand Prime Minister General Prayut Chan-o-cha, Pitak Pruittisarikorn, managing director of the HKKT Fund said the Foundation will continue to support the flood victims in Southern Thailand to ease some of their suffering. The high pressure washers, he said, are particularly needed to clean dirt left behind by the floodwaters from buildings so that people can begin rebuilding their lives as soon as soon as possible.

Also sending assistance to the region is Malaysia’s Nutric Group, manufacturer of the Bionutric range of anti-aging, health, and wellness supplements sold through a global multi-level marketing network known as I-Linkage.

Established more than 15 years ago, the company has dispatched several of its representatives to Surat Thani Province, in addition to others, where it says it is working alongside Thailand government authorities to distribute ‘Essential Kits’ containing bottled water, five-kilogram (11lb) bags of rice, canned food, light snacks, candles and insect repellents, to flood affected residents.

Ryan Lim, Nutric Thailand country manager, said the company has a large footprint and long-established network across Thailand and reports of the level of destruction and despair from its associates in the region  ere such that it could not ignore the plight of those affected. “We feel very close to the Thai people and consider them to be our family. Hence as part of our commitment to them, we felt we needed to do something by giving back to them in their time of need.”

Following the first reports of heavy rain, flash floods, and widespread destruction on New Year’s Day we notified our Thai associates of our intention to provide assistance to those affected. Our network of associates responded with great generosity and we are now delivering essential items to some of those most affected, he said. According to Mr Lim up to 400 households have been affected by flash floods in the Southern Thailand districts that Nutric is providing assistance to.

At least 80 people have been killed while four others remain missing as a result of heavy rain, mountain runoff, and flash-floods inundating Thailand’s 12 southern provinces since January 1, damaging more than 530,000 homes. Damage in the region is put at more than Bt25 billion ($706.614 million), while the Thai Meteorological Department (TMD) is forecasting additional heavy rain for Southern Thailand into this coming week.