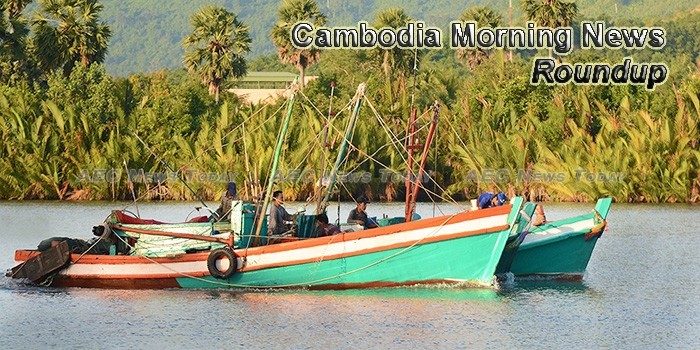 Cambodia morning news by AEC News Today is your one stop for Cambodia news on matters of governance and policies affecting Asean business communities.

World Bank expert on whether Cambodia will maintain its impressive growth
Miguel Eduardo Sánchez Martín, a senior economist at the World Bank, talks about the challenges ahead for Cambodia’s economy.
— Southeast Asia Globe

US attempt to recoup Cambodian debt ‘cack-handed’: former Australian Ambassador
The issue of Cambodia’s debt to the United States is back in the spotlight as the US appears set to ignore pleas from the South-East Asian nation to cancel the decades-old arrangement.
— ABC News

Robust factory growth charted
Cambodia has seen a marked increase in industrialisation over the past five years, with the number of factories nearly doubling during that period and producing a broader range of goods for both export and domestic consumption, according to new unreleased government data.
— The Phnom Penh Post

Sathapana Bank proceeds with logo change
Sathapana Bank has pre-emptively removed its signature golden lion logo from all 162 branches nationwide as the private bank aims to deflect government criticism and avoid confusion as being identified as a state-owned institution, a bank executive said yesterday.
— The Phnom Penh Post

BRED Bank aims to fill gaps
BRED Banque Populaire, a French cooperative lending institution, is the newest entry to Cambodia’s competitive banking sector and the first venture of a European bank in the Kingdom since the late 1990s.
— The Phnom Penh Post

Apsara Authority Unaware of Chinese Angkor Wat Project
A Chinese investment company is planning to build a $21.8 million cultural park near Angkor Wat, according to a report in Chinese media, although the authority responsible for the world heritage site said on Sunday it had not been approached about the project.
— The Cambodia Daily (paywall)

Cambodia’s female construction workers
Cambodia’s construction industry is booming, and high-rises are being built across the capital of Phnom Penh. With the city’s population doubling over the past four years, it has begun its transformation into a sprawling metropolis.
— BBC

Cambodia’s Electoral Body Weighing Legality of Opposition Campaign Slogan
Cambodia’s electoral body said Friday it is weighing whether the opposition must modify a campaign slogan the ruling party has characterized as incitement and threatened legal action over, as the country gears up for local commune elections in June.
— Radio Free Asia

China investors largest foreign traders on CSX
Foreign trading on the Cambodia Securities Exchange (CSX) is dominated by investors from China, Japan and Taiwan, according to the stock exchange’s 2016 fact book, published on Friday.
— The Phnom Penh Post

Feud Between Government, UN Rights Office Continues
While the government agreed at the end of last year to let the U.N.’s human rights office continue operating in the country for two more years, the debate over the body’s role in Cambodia is far from finished, as illustrated by the past few days.
— The Cambodia Daily (paywall)

Hun Sen Accuses Analysts of Hypocrisy Over Leaks Criticism
Prime Minister Hun Sen accused analysts of hypocrisy on Friday for taking aim at the government over leaks of alleged telephone conversations between Cambodia’s political rivals, while staying silent over the surveillance techniques of the CIA.
— The Cambodia Daily (paywall)