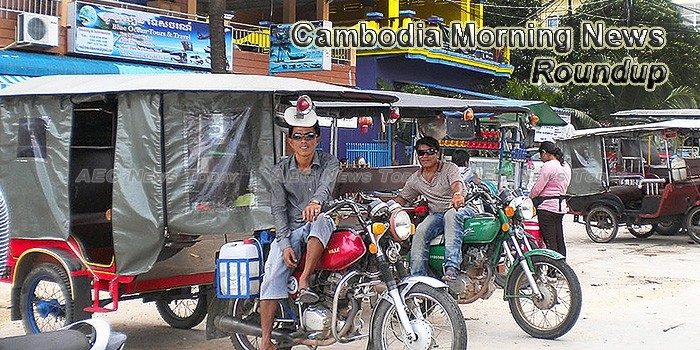 Microlender in monster deal
Hong Kong financial giant The Bank of East Asia and Sri Lanka’s LOLC announced on Friday that they have jointly acquired a majority stake in Prasac Microfinance, Cambodia’s largest microfinance institution (MFI) by assets, in what could be the largest acquisition of a Cambodian lender to date.
— The Phnom Penh Post

Beer tops advertising budgets
Beer advertising is one of the fastest growing advertising segments in the Kingdom, though just as people often struggle to keep track of how many beers they have put away, the amount that local breweries and distributors actually spend on media placements is subject to widely varying estimates.
— The Phnom Penh Post

Microloans Work for Some, Leave Many in Debt
Nearly everyone living in Pann Sopheatra’s village, just across the Mekong River from Phnom Penh, has either taken out a microfinance loan or knows someone who has.
— The Cambodia Daily (paywall)

Family of Slain Analyst Calls for Renewed Investigation as Speculation Mounts Over Murder Footage
The family of slain political commentator Kem Ley have called for a renewed investigation into the circumstances surrounding his murder following the release of security camera footage purporting to show the killer fleeing the scene of the crime.
— VOA

Local aid worker claims adoption papers for Angelina Jolie’s son Maddox were ‘faked’
Angelina Jolie’s adoption papers for her son Maddox were reportedly faked, according to a local aid worker. Director of an aid charity, Mounh Sarath, has sensationally claimed that he signed official documents in Cambodia that named him the father of Maddox, in order to speed up the adoption process and provide a local address.
— Goss.ie

Rainsy incitement case over Ley comments wraps
A verdict is due on March 30 in the incitement and defamation case brought against former opposition leader Sam Rainsy by Prime Minister Hun Sen over comments suggesting government involvement in the murder of political analyst Kem Ley.
— The Phnom Penh Post

Gov’t mobile campaign to end amid grumbling
A government message that’s been playing before every outgoing phone call for the past few weeks – part of a campaign to publicly distance the state from microfinance operators – will be gone by the end of the month.
— The Phnom Penh Post

Salary Raises Coming for Local Officials Ahead of June Elections
All elected local officials will see their salaries raised next month—just ahead of commune elections in June—after a sub-decree was signed by Prime Minister Hun Sen on Friday.
— The Cambodia Daily (paywall)

Cambodia’s Opposition Awaits Court Ruling on Campaign Slogan
Cambodia’s opposition party will stop using a slogan the ruling party has characterized as incitement if the country’s courts rule against it, a lawmaker pledged Friday, as the country gears up for local commune elections in June.
— Radio Free Asia

Thailand bribery rate is worse than Myanmar and Cambodia: survey
Transparency International has published its 2017 report of global corruption barometer entitled “People and Corruption : Asia Pacific.” It estimates that more than 900 million people across the 16 surveyed places had paid a bribe in the past year when trying to access basic services such as education or healthcare.
— The Nation

Malaysia Morning News For May 31