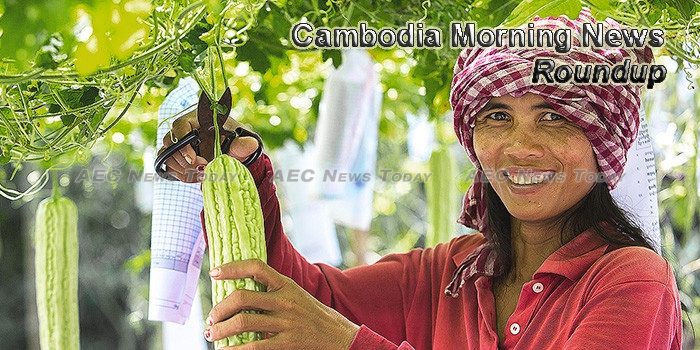 Factories to foot the bill for new worker benefits
Garment and footwear manufacturers have called on the government to provide facilities to help offset the higher costs on production that they will face as the result of a benefits package that Prime Minister Hun Sen pledged to garment factory workers this week.
—The Phnom Penh Post

Exam Reform Subtracts Poor From Equation
The education minister’s message for students finishing high school has been heard loud and clear since the reform of the national completion exam four years ago: Merit will buy you a pass grade—not money.
—The Cambodia Daily (paywall)

Hun Sen gives AIM a reprieve after CEO apologises for ‘hurt’ caused by CNN report
Prime Minister Hun Sen has decided not to shut down a Christian anti-trafficking charity after its founder issued a “heartfelt apology” yesterday.
—The Phnom Penh Post

Cambodia’s close ties with China not hard to decipher
Much has been made of Cambodia’s embrace of China. This is especially true after the Belt Road Initiative (BRI) began. Cambodia is viewed as one of China’s closest allies in South-east Asia, with strong government-to-government relations, and is perceived by many as China’s “vassal state” or “ever-loyal satrap”.
—Today Online

US law could help Cambodia identify foreign pedophiles
The US is in the process of implementing new legislation that experts and officials say could help Cambodia protect its children from foreign-born pedophiles, a need whose urgency was highlighted most recently by the case of Robert Boehnlein, a convicted US sex offender arrested in Battambang for allegedly raping a 5-year-old.
—The Phnom Penh Post

A No Good, Very Bad Year For the US in Cambodia
To Council of Ministers spokesman Phay Siphan, it all began with the Arab Spring.As countries in the Middle East shed longstanding dictators in 2011, the U.S. government-funded Radio Free Asia (RFA) whispered into the ears of Cambodians that it was their turn for regime change in the wake of the disputed 2013 national election, he claimed on Monday.
—The Cambodia Daily (paywall)

My Cow, My Husband: Woman Marries Calf in Cambodia (video)
Long before the nations of Southeast Asia were established there existed a tie that until this day binds all Southeast Asians together — the shared belief in animism; that inanimate objects and all living creatures possess a spirit. While it might sound like ancient history, animist practices can be seen across Asean on a daily basis.
—AEC News Today

Sacred symbol raised in Cambodia Temple
the sacred Baha’i symbol representing the connection between God, His Manifestations, and mankind was raised within the local Baha’i House of Worship in Battambang, Cambodia, and installed at the apex of its dome.
—Bahai World News Service