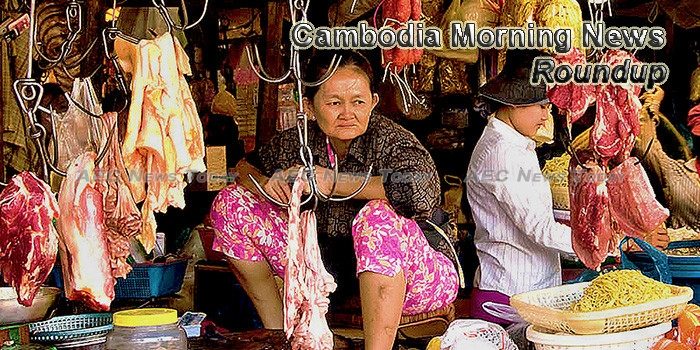 Website Launched to Provide New Resource for Unregistered SMEs
Only 1 in 10 small businesses are properly registered in Cambodia due to unclear information about what’s required of them, Industry Minister Cham Prasidh said last week at the opening of the “Business Information Center,” a website outlining requirements for new businesses.
— The Cambodia Daily (paywall)

Cambodia Daily slapped with huge tax bill
Government-aligned media outlet Fresh News has published a leaked letter from the Taxation Department to the Cambodia Daily claiming that it owes $6.3 million in back taxes, a disclosure accompanied by scathing anonymous “letters” attacking the English-language newspaper and prominent NGOs.
— The Phnom Penh Post

Demand for air cargo soars to new heights
Global demand for air freight rose by 10.4 percent during the first half of 2017, compared to the same period a year earlier, marking the strongest demand for air cargo since air freight’s rebound from the global financial crisis seven years ago in 2010, the International Air Transport Association (IATA) said in a press release yesterday.
— The Phnom Penh Post

Growth spurt of exports to Japan weakens in H1
Growth of exports to Japan slowed during the first half of 2017, marking the lowest half-year growth rate in nearly a decade, newly released data from Japan’s development agency show.
— The Phnom Penh Post

Traditional Cambodian Textiles Styled With a Modern Twist
Models draped in classic Cambodian textiles melded with modern designs strutted across the runway under the glare of spotlights as an enthralled audience showed their appreciation.
— The Cambodia Daily (paywall)

PM to Hold Weekly Meetings With Workers
Prime Minister Hun Sen will start hosting weekly meetings with garment workers across the country later this month in what some see as a calculated political move to shore up support among a key demographic ahead of next year’s national election.
— The Cambodia Daily (paywall)

Hun Sen promises weekly garment factory visits
Prime Minister Hun Sen announced on Friday that he will make weekly visits to garment factories across the country to better understand the demands and needs of workers, in what some observers said could be an attempt to appeal to potential voters before next July’s national elections.
— The Phnom Penh Post

Cambodian Team Qualifies for Global Technology Contest
With just 12 weeks of coding and business training under their belts, a team of five girls from a center in Phnom Penh that provides education for economically disadvantaged students will fly to the U.S. today to compete in a global technology contest in Silicon Valley, California.
— The Cambodia Daily (paywall)

Deportation of Montagnards Stalled After UN Objection
The government has stalled its latest effort to deport a group of Vietnamese asylum-seekers at the behest of the U.N. refugee agency, an official said on Sunday, after stating last month that the 16 Montagnards would soon be expelled to Vietnam.
— The Cambodia Daily (paywall)

David is a Phnom Penh journalist
There are times when the work of a journalist in Cambodia is made so easy. Compared to some other countries, where politicians rarely say what they think (or think beyond what they are told), Cambodian officials tend to wear their innermost thoughts on their sleeves, words rolling from the tongue in almost stream-of-consciousness fashion.
— New Mandala

PM Hun Sen Visits Japan
Prime Minister Hun Sen is on a four-day official visit to Japan from August 6 to 9 at the invitation of the Japanese government.
— Fresh News