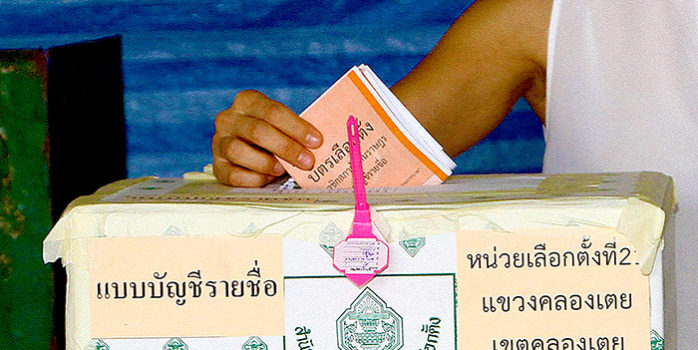 After some months of uncertainty, a representative from Thailand’s Democrat Party last week declared in a televised seminar that the party would not support the proposed draft constitution in the August 7 referendum. This follows an earlier declaration from the pro-Thaksin Puea Thai Party (PTP) that it also opposed the draft.

The announcement represents a rare moment of agreement between the two rival parties, the Democrat’s and Puea Thai, which have been at loggerheads since the 2006 coup. The Democrat Party represent the Bangkok establishment and the southern region, while Puea Thai (and its earlier incarnations) represents the rural and urban working classes, particularly from the north and northeast.

Even though the military regime has all but forbidden campaigning against the draft constitution, agreement between the two parties now means that the draft will face an uphill battle to be passed in the referendum.

The draft constitution envisages an appointed Senate, limits on parliamentary authority, enhanced powers for non-elected state agencies, and a provision for a non-elected prime minister. It is widely seen as designed to create a constitutional framework that would allow the military and their royalist backers to oversee Thai politics for the foreseeable future, whatever the outcome of elections.

The architect of the current draft is 78-year-old Meechai Ruchupan, a conservative lawyer with long-standing palace and military connections. Meechai embodies the political thinking of Thailand in the 1980s, when the military and the palace shared power.

At that time General Prem Tinsulanonda, a palace favourite, was prime minister and Meechai ran the prime minister’s office. Elections never threatened that control until the late 1980s.

Then, as now, the tension was resolved by a coup in 1991. Then, as now, Meechai headed the constitutional drafting committee appointed by the coup-makers. The subsequent political conflict led to the Black May incident of 1992, when the military opened fire on pro-democracy demonstrators, killing scores. Meechai drafted the amnesty bill that exempted those responsible for the killings from prosecution.

The military regime’s tight control has spawned numerous conspiracy theories. One theory alleges that the current regime was never serious about having the constitution adopted in the first place. Rather, its aim was simply to distract the public from its unpopularity and to prolong its rule for as long as possible, at least until after the royal succession is settled.

After all, Article 44 of the provisional constitution grants Prime Minister General Prayut Chan-o-cha the power to order a new constitution to be adopted if and when he chooses. An earlier draft constitution by another conservative lawyer, Borwornsak Uwanno, was rejected by the military-appointed National Reform Council (NRC) in September 2015.

The referendum comes at a time when the Thailand military’s post-coup popularity among its conservative supporters has been eroded. Prime Minister General Chan-o-cha’s public appearances are by turns petulant, foul-mouthed and self-pitying. The regime’s handling of the economy, even in the eyes of its own supporters has been dreadful.

Its foreign policy, which seems deliberately designed to rebuke the United States by exaggerating Thailand’s warm relations with China and Russia, appears reckless by the high standards of Thailand’s foreign affairs establishment.

Given the evaporation of much of its support even among its conservative backers, its incompetence at managing the country and its lack of foreign friends, the question is, why is the military regime still in power more than two years after the coup?

One answer is its skill in repression. This dates back to the lessons it learned in the Cold War years. While repression is undoubtedly ugly, the military has so far managed to regulate it to a level that it does not outrage enough people to spark a mass uprising that might threaten its political position.

But the other answer is ongoing uncertainty about the future of the monarchy, which is the single reason for the conservative turn in Thai politics over the last decade.

The resolution of Thailand’s 11-year-old political conflict depends on the outcome of the succession following the passing of the 89-year-old King Bhumibol, now in the 70th year of his reign. The Crown Prince is deeply unpopular. Many conservative Thais doubt his ability to manage the affairs of the monarchy at such a crucial moment in Thailand’s history.

Because of the sensitivity in discussing the monarchy there is much speculation over the real state of the king’s health. <Redacted content>

This article was written by Dr Patrick Jory, a Senior Lecturer in Southeast Asian History at the School of Historical and Philosophical Inquiry at the University of Queensland. It first appeared on East Asia Forum under a Creative Commons licence where the original version can be read. It is produced here with its permission.