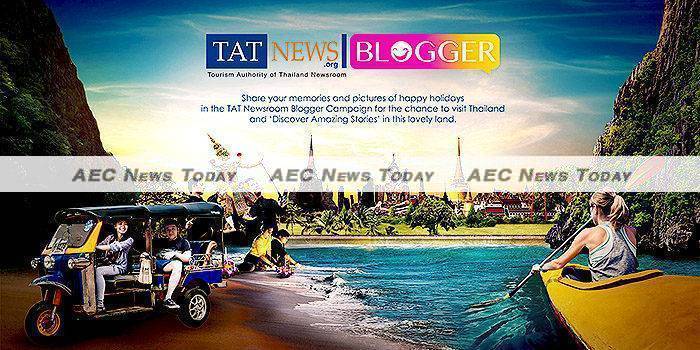 The Tourism Authority of Thailand (TAT) has announced the commencement of its 2016 TAT Newsroom Blogger Campaign where three photographers and three writers can win a paid trip to Thailand.

Running from June 16 through July 31, the 2016 TAT Newsroom Blogger campaign follows the highly successful ‘Champions #GoThailandGoASEAN’ competition last year which saw tens of thousands of entries from around the world by bloggers and photographers who had visited Thailand.

The 2016 TAT Newsroom Blogger campaign is open to bloggers and photographers with an active online blog or social media presence – Facebook, Pintrest, Twitter, Google+, etc. – as well as what the TAT calls ‘a high profile’, with the campaign part of the TATs strategy of using social media to promote the kingdom.

Entrants in either category of the 2016 TAT Newsroom Blogger Campaign can enter up to five photographs or stories in the four categories – Thainess, responsible tourism, niche tourism, or local destinations – which must be original, and must not have been published before. Copyright for all photographs submitted become the property of TAT.

All entries must ‘promote a good image of Thailand and its culture’ and ‘be of practical value in promoting Thai tourism’. Stories should be positive in tone. Anything deemed negative or derogatory will not be accepted.

No Need to Have Visited Thailand

The 2016 TAT Newsroom Blogger campaign is not only restricted to people who have actually visited Thailand either. In casting a wide net for entries the TAT also allows those who have never visited Thailand, but would like to, to also enter. Would-be Thailand tourist bloggers simply need to write about ‘what attracts you to this historic land’.

After posting their stories and photos, bloggers and photographers can then ask their online followers and members of the public to vote for their entry. As with last year, winners of the 2016 TAT Newsroom Blogger campaign will be those who receive the highest number of social media likes.

The three bloggers and three photographers with the highest numbers of votes will win a five day/ four night trip to Thailand including international and domestic air fares, hotel accommodation, and meals. After a trip around Bangkok they will be taken on a familiarisation trip to the northern Thailand cities of Chiang Mai and Chiang Rai, where they will be guided to some of the regions leading attractions.

The next three most voted-for entries will receive a large-size limited-edition Sukjai vinyl figurine, the official mascot of the Tourism Authority of Thailand. Voting for entries commenced last Thursday and will remain open through August 10.

Its not just photographers and writers who can win prizes either. Voters who are logged in to their social media account at the time they vote will have their vote recorded, with the names of all those who participate being placed into a lucky draw for a chance to win a medium-size limited-edition Sukjai vinyl figurine.

Tourism has been one of the bright spots in the Thai economy since the Thai military mounted a coup d’état against the government of Yingluck Shinawatra on May 22 2014.

Last year, according to the Thailand Tourism and Sports Ministry, the country played host to 29.88 million foreign visitors, an increase of 20.4 per cent over the 24.81 million said to have visited in 2014.

The ministry says foreign tourists injected about $62.677 billion (Bt2.21 trillion) into the Thai economy last year, an average of about $2,526 each.

For 2016 Tourism and Sports Minister Kobkarn Wattanavrangkul says it is “estimated” some 32 million tourists will visit the Southeast Asia kingdom, an increase of about 7 per cent on last year, injecting about $65.229 billion (Bt2.3 trillion) into Thailand’s economy.

In the first four months of this year foreign visitors to Thailand topped 11.682 million, a 14.12 per cent increase on the same period last year. The continuing surge in Thailand foreign tourism figures is primarily due to an increasing number of Chinese tourists, who last year accounted for some 7.93 million, or 26.5 per cent of all foreign visitor arrivals to Thailand.

In the first four months of 2016 Chinese tourists to Thailand increased 27.35 per cent year-on-year (YoY) to 3.445 million, with more than 400,000 arriving as independent travellers and termed ‘quality tourists’ by the TAT, spending an average of $142 (Bt5,000) per person per day. For 2016 the TAT is estimating some 10 million Chinese will visit Thailand.