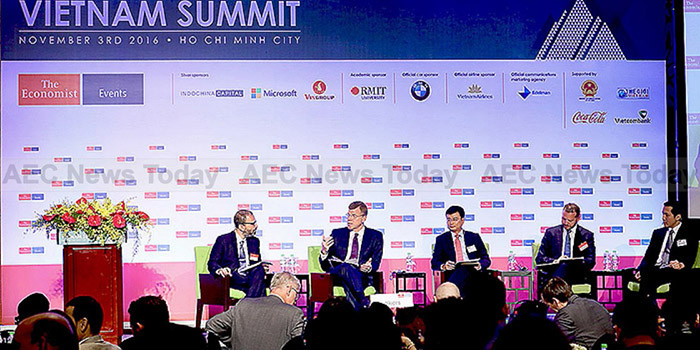 Government officials, development experts, and members of the private sector gathered recently in Ho Chi Minh City for the opportunity to listen as Vietnam’s economy was put under the microscope. Held for the first time in four years The Economist‘s ‘Vietnam Summit 2016’ saw the country’s opinion leaders from government, industry and international finance bodies sit down and explore the country’s most pressing and timely issues

Addressing the morning keynote panel Pham Binh Minh, deputy prime minister and minister of foreign affairs, was candid about the challenges Vietnam faces in transitioning from a largely agricultural country to an an industralised nation. “The goal is to reduce the agricultural labour force from 70 per cent to 40 per cent of the total workforce,” he said.

Mr Minh said this meant creating 1.5 million new jobs every year, which he admitted will be difficult. Unemployment will likely increase during this process, he said, while explaining that the country needs to begin following a new growth model. “Vietnam will pay more attention to domestic demand and markets to stimulate production and consumption,” he said.

While this may seem like a detour from Vietnam’s export-driven growth of the last decade, Mr Minh underscored that trade will remain an important factor in Vietnam’s economy. “We will continue to sign free trade agreements (FTAs) as well so that trade remains a key driver of growth. We currently have FTAs with 55 partners”, he said.

Touching on the Trans-Pacific Partnership (TPP), a landmark trade deal between 12 Asia-Pacific nations that now faces an uncertain future following the US Presidential Election, Mr Minh affirmed that while Vietnam is committed to joining the TPP, its failure to become a reality was not a major concern. “If [the] TPP doesn’t pass, Vietnam still has FTAs with the EU, EAEU and Asean countries,” he said.

Opportunities And Challenges For Vietnam’s Economy

Looking at Vietnam’s place in the global economy, a panel comprising Stephen Groff, vice-president for East, Southeast Asia and the Pacific for the Asian Development Bank (ADB), Santitarn Sathirathai, head of emerging Asian economies at Credit Suisse, Andrew Staples, Southeast Asia director at The Economist Corporate Network, and Pham Thanh Ha, deputy general director of Vietcombank, touched on some of the opportunities, as well as obstacles, facing Vietnam’s economy over the next few years.

Describing Vietnam a well-positioned currently, Mr Groff said there are issues it needs to deal with “before the next economic shock.”

The reform of debt-ridden state-owned enterprises (SOEs) was a common theme throughout the event, and Mr Groff argued that this is one of the most important issues for officials to address. “If Vietnam wants to jump up to the 8 per cent growth level it will depend on the government’s handling of the SOE sector,” he said.

The Economist‘s Mr Staples agreed, saying that the outlook for Vietnam’s economy is currently positive saying “we expect 6.5 per cent growth over the next five years and an improved business climate”. However, he tempered the praise by adding “treatment of minority stakeholders and the opacity of the justice system remain problems.”

Vietnam: a New Asian Tiger – Thailand And Malaysia, Stuck in The Middle-Income Trap

Mr Sathirathai, from Credit Suisse was even more bullish, describing Vietnam as “the undisputed king of trade in Asean. In the eyes of foreign investors Vietnam is already a new Asian tiger… Vietnam is still in a sweet spot of growth, whereas Thailand and Malaysia are stuck in the middle-income trap”, he claimed.

Stressing the importance of creating a strategy once Vietnam moves up the value chain into China’s export space, Mr Sathirathai posited; “How do you position to compete with them?”.

While much of the discussion was upbeat, significant structural challenges face Vietnam as its export products increase in value. According to Mr Groff, “Vietnam needs to improve its value chain. Currently 90 per cent of exports rely on imports,” often from Taiwan and South Korea. The ADB analyst also lamented that local small and medium enterprises (SMEs) are limited by the dominance of the SOE sector.

Deputy minister of industry and trade Do Thang Hai acknowledged many of the same points, adding the government’s perspective to issues facing trade in Vietnam, including the critical need to improve the national supply chain. “We have one-third of Samsung’s total workforce in Vietnam, but most supplies are still imported from Korea”. As far as the domination of certain market segments Mr Hai said “the government is withdrawing more capital from SOEs to create space for SMEs to grow”.