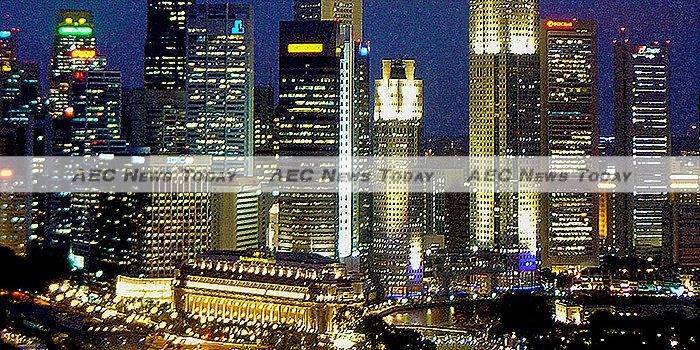 A eight month record industrial output slump of 6.7 per cent in December has seen Singapore record its slowest annual gross domestic product (GDP) growth in six years. Figures released by the Ministry of Trade and Industry (MTI) today (Wednesday, February 24) show Singapore 2015 GDP grew by just 2.0 per cent – a 39.39 per cent fall over 2014 Singapore GDP growth of 3.3 per cent.

The 2015 Singapore GDP growth is the weakest since 2009 when the Singapore economy grew by just 0.6 per cent and comes in well below the World Bank’s estimate of just 2.5 per cent Thailand 2015 GDP growth, making it Asean’s weakest performing economy in 2015 (See: Thailand Weakest Asean Economy in 2016 – World Bank).

The announcement comes on the back of a separate report by the Singapore Trade Development Board (STDB), commonly referred to as International Enterprise Singapore (IE Singapore), that two-way merchandise trade fell from S$997 billion (US$708,353 billion) in 2014 to S$884.1 billion (US$628,139 billion) last year. A fall of 11.3 per cent.

According to IE Singapore the biggest fall was seen in oil related exports which contracted 32.2 per cent year-on-year (YoY) despite volume increasing 6.8 per cent.

For 2016 IE Singapore forecasts a growth of between zero per cent and 2 per cent for NODX, though it revised down its previous forecast for total merchandise trade in 2016 to between -1 per cent and 1 per cent.

Over at the MTI the forecast is no more rosy. Pointing to an increasing trend by US and China manufacturers to source locally the MTI said Singapore manufacturing, which accounts for about 20 per cent of the Singapore economy, will remain weak, despite a gradual recovery in the global economy.

In 2015 Singapore manufacturing contracted 5.2 per cent, a 304 per cent reversal on the 2.7 per cent growth it experienced in 2014, with the MTI saying the fall was across all industry sectors except chemicals.

According to the MTI continuing low oil prices have also seen diminished prospects for new oil rig orders, with increased risk of some existing orders being cancelled.

While services producing industries expanded by 3.4 per cent YoY, this was a 5.55 per cent contraction on 2014 when it experienced growth of 3.6 per cent.

The one bright spot for the Singapore economy in 2015 was, according to the MTI, in the wholesale & retail trade and finance & insurance sectors, which expanded by 6.1 per cent and 5.3 per cent respectively.

Claiming that “the global economic outlook has softened since the start of the year, alongside a sharp fall in oil prices and volatility in global financial markets.

Global growth for the whole of 2016 is now expected to be only marginally better than in 2015.

“Growth for the year is expected to be supported by strengthening growth in the advanced economies, even as conditions in the emerging markets remain challenging.

“Taking into account the above factors, and barring the full materialisation of downside risks, the Singapore economy is expected to grow at a modest pace of 1.0 to 3.0 per cent in 2016”, the MTI said, putting it in a race with Thailand for the title of Asia poorest performing economy in 2016.