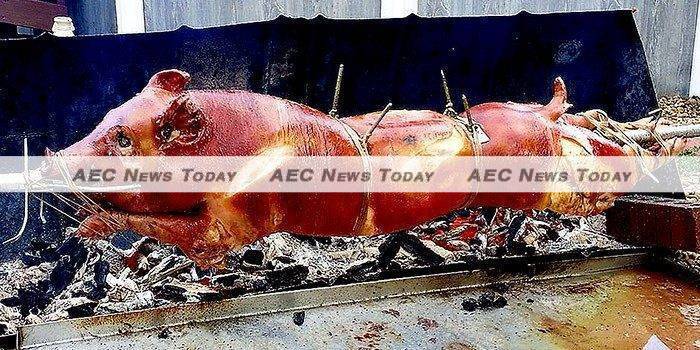 Philippines residents might soon have to look for meat substitutes for their tocino, patatim, pork adobo, and lechon paksiw if Philippines pig farmers go through with a threatened five-day shutdown of hog sales in response to government inaction on pork smuggling.

The country’s pig farmers are up in arms over the smuggling of pork meat into the country, which the Pork Producers Federation of the Philippines (PPFP) and other livestock groups claim reduced the number of pigs held by backyard farms by almost 17 per cent between 2010 and 2015: from 9.54 million head to 7.95 million.

Claiming that ‘the entire livestock industry, at no point in recent years, has suffered this much loss’, the group has sent an open letter to Philippines President Benigno Aquino III threatening to withhold hogs from markets nationwide unless action is taken. The group says that in the six years of Mr Aquino’s presidency, 80,000 backyard pig farmers have lost their livelihoods. Even commercial pig farms, once viable, are now also struggling.

According to the group, ‘around 202 million kg (445.334 million lb) of pork were smuggled outright, or through false declaration, into the country from 2010 to mid-2015. This translates to about P9 billion US$194 million (P9 billion) in lost revenues for the government’.

In addition to ramped-up quarantine and inspection procedures, Philippines pig farmers want the president to immediately sign into law the approved bill that defines the smuggling of agricultural commodities as an act of economic sabotage.

Smuggling has been a longstanding blight on the Philippines economy, with a recent report by the Federation of Philippine Industries (FPI) claiming the government lost more than US$28 billion (P1.3 trillion) in revenue to smuggling between 2002 and 2011. The report surveyed 800 companies, with the final figures calculated using differences in import data between the Bureau of Customs (BoC) and the International Monetary Fund (IMF).

According to the report, the following are the top 10 seized articles in 2013 and their value:

In 2014, 165 containers of frozen meat products were seized by the BOC at Manila International Container Port (MICP), where they linger to this day, awaiting disposal.

According to MICP Chief Gerardo Macatangay, action has begun to destroy the seized meat, but is still awaiting the waiving of charges and fees by International Container Terminal Services (ICTS), the Philippine Ports Authority (PPA), and shipping lines.

Agham partylist leader Angelo Palmones has expressed concerns over the delay in disposal, claiming the seized smuggled meat might in turn be smuggled out of the MICP and sold in the local market in the same manner as happened in 2011 and 2012, when rotting meat products were sold in Cebu.

‘Pork Holiday’ Not Without Precedent

The threatened ‘pork holiday’ by Philippines pig farmers is not without precedent. In 2012, hog and poultry farmers implemented a two-day ‘pork and poultry holiday’ in Metro Manila over similar concerns, threatening further supply stoppages if the smuggling issue was not addressed.

At the time a meeting was held between concerned stakeholders and government agencies which resolved that the BoC should supply the Department of Agriculture (DA) with access to the BoC’s Inward Foreign Manifests (IFM) to compare against its list of import permits. Supplied two days before a vessel’s arrival, the IFM contains details of imported products, source country, the name of the ship that carries the cargo, and the arrival date. Products without import permits are considered smuggled and, thus, confiscated immediately.

A similar arrangement was agreed in 2011 and followed an earlier attempt to coordinate the two agencies in 2009 when the IFMs were provided to the DA, making it easy for the BoC and DA to seize smuggled items. However, in the same year the procedure was stopped due to the interference of influential parties. Without the IFM, the DA was left powerless and, since then, smuggling has increased.

Subsequent to the meeting in 2012, little has been done to get the two agencies working in unison to crackdown on smuggling into the Philippines.

According to insiders at the DA, the IFMs are in the BoC database but funding is yet to be provided by the Department of Finance (DoF) so that suitable access to the BoC’s computers can be implemented.

Meanwhile Philippines pig farmers say the countdown has begun. ‘We can no longer sit idly in the dark and wait until our government offers solutions,’ said a spokesman. ‘Six years is more than enough time. If no concrete action is taken immediately, we are ready to pursue other avenues to seek redress.’

Philippines Contributor
Evangeline Iñigo Alfe has a strong background in business and accounting having obtained a Bachelor of Science in Commerce, majoring in Accounting from the University of San Carlos, Cebu City, Philippines 1986.

In the year 2000 she obtained a Masters in Education, majoring in Teaching English as a Second Language from the University of the Philippines in Visayas, Cebu City.

Since then she has put her academic experience to good use working in research, analysis, and writing roles for a range of organisations as well as for online and off-line publications.