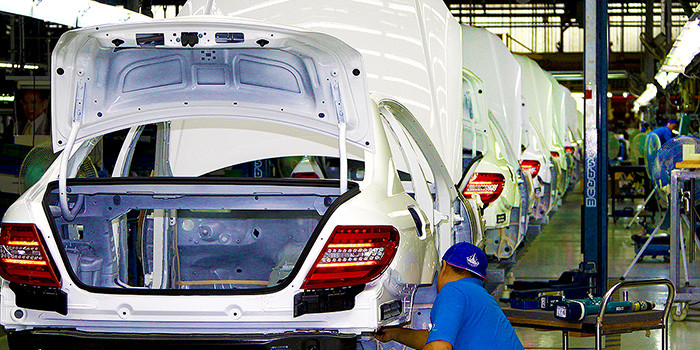 Although Vietnam remains a country of motorbikes automobiles are becoming more common by the day. Car sales were up 31 per cent in the first five months of this year over the same period in 2015 which saw a 55 per cent year-on-year (YoY) increase to 245,000 units on top of a 35 percent YoY increase in 2014.

While taxes and tariffs have kept Vietnam car prices artificially high for years income for certain segments of the population has caught up with the cost of buying a car. Two new policies are about to come into effect that will lower this cost, while simultaneously helping and, at the same time, potentially hurting the Vietnam auto industry.

The first of these policies is the requirement for Vietnam to remove all tariffs on auto imports from Asean Community (AC) countries in 2018. This removal will open the door for cheaper imports from Thailand, Malaysia, and Indonesia posing problems for Vietnam’s auto industry, which is struggling to make a name for itself.

A weak supporting auto parts industry means Vietnam car manufacturers have to import parts and assemble them in the country. Although completely built units (CBUs) saw the fastest increase in sales of any type of car last year the figure has dipped this year due to a new special consumption tax that will rise again once the tariffs are done away with in 2018.

This is a smart policy as continuing growth in consumer demand and incomes means it is now impossible to stop the growing popularity of cars in Vietnam. Urban streets are fast becoming choked with over-sized SUVs and luxury sedans. Giving consumers an incentive to buy smaller cars will hopefully persuade some to do so.

Thaco, or Truong Hai Auto Corporation, is betting big on the new tax cut having a major impact. The company currently controls around 45 per cent of the Vietnamese market and manufactures cars for Kia, Mazda, and Peugeot.

Last week Thaco announced a US$ 1.33 billion plan to expand its manufacturing and retail activities over the next three years, forecasting sales to rise by 40 percent this year to more than 112,000 units and $3.17 billion (VND71.73 trillion).

Two-thirds of this will go towards expanding its operations in Quang Nam, a province in the centre of the country where Thaco’s Mazda plant there currently has an annual capacity of 25,000 units. After expanding it will produce 100,000 cars per year. The company’s nearby truck and bus plant will also reach a capacity of 100,000 units per year.

Such an ambitious plan by a domestic firm may seem surprising, especially in light of a potential future flood of Asean-produced cars. Thaco, however, seems confident in its bullish move. The Vietnam auto industry manufacturer expects sales to rise by 40 per cent to $3.17 billion this year. This comes on top of an astonishing 90 per cent increase last year.

Hyundai Thanh Cong, which assembles and imports Hyundai automobiles, is also betting on growth. The firm recently completed work on the first part of a plant in Ninh Binh Province where small vehicles with engine capacities below the 1.5 litre limit will be built.

It’s not just Vietnam auto industry manufacturers eyeing the 1.5 liter and below market either. Mercedes-Benz and Audi have both recently displayed smaller engine vehicles, while BMW recently unveiled a new 1.5-liter seven-seat car.

In a recent interview with Bloomberg BMW Group Asia managing director Axel Pannes said the company sold just over 1,500 cars last year in Vietnam, describing it as the company’s top growth market in Southeast Asia for the last few years.

Fellow German automobile manufacturer Mercedes-Benz is also feeling bullish about Vietnam with plans to this year invest an additional €11 million (US$ 12.2 million) in two new assembly lines. Last year the company reported sales of 3,600 units, a 50 per cent YoY increase on 2015, making it one of Mercedes-Benz’s five fastest growing markets globally.

While it remains to be seen how the constant push and pull of domestic tax cuts and import tariff reductions will play out in the coming years, with the Economist Intelligence Unit putting the number of Vietnam households with financial assets between $100,000 and $2 million at among the fastest-growing in the world it seems certain that Vietnam’s roadways are set to become even more congested than they already are.