Hanoi & HCMC Metros Struggling to Get on Track 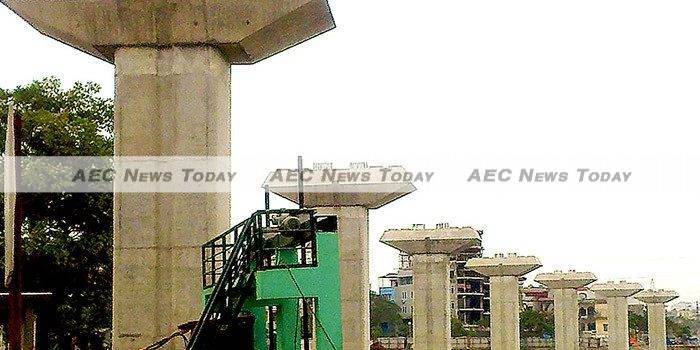 Vietnam’s first metro systems are under construction in the rapidly expanding urban centres of Hanoi and Ho Chi Minh City (HCMC), where population growth has placed a severe strain on existing infrastructure. But can these fledgling mass transit systems – the country’s first – overcome the twin obstacles of spiralling costs and creeping delays to capitalise on this much-needed development?

Construction on Hanoi’s metro (Dự án Đường sắt đô thị Hà Nội) began in 2011 with a plan to build five lines, the first – the elevated Cat Linh-Ha Dong route – originally due to become operational this year. However, delays have pushed the largely Chinese-financed and -engineered line back to 2018, while accidents and cost overruns continue to damage public perception.

On November 6, 2014, several steel reels fell from a construction site onto the street below, killing one person and injuring three others. In late December that same year, scaffolding fell from another terminal onto a taxi, although everyone escaped unharmed.

Last year, on May 12, a steel girder fell from a crane and crushed an empty car. The same day, a crane operated by South Korean contractor Daelim fell onto several buildings, injuring a motorbike driver and a pregnant woman. Perhaps the most peculiar cause of delay also came last year, when local residents reported that entire sections of the elevated Cat Linh-Ha Dong line were unstable. Officials responded that this was an intentional design feature, but many in the public remain unconvinced.

Work on the project, halted while safety procedures were reviewed, has since resumed. But safety concerns aren’t the Hanoi metro’s only woes: in October 2015, the Railway Project Management Unit, which oversees construction, asked for approval to raise total investment in the Cat Linh-Ha Dong line from US$552.9 million to $868 million, citing the need for design modifications.

For now, construction continues – although the official launch date and total cost have yet to be calculated. In the meantime, Hanoi’s drivers continue to suffer congested roads.

First proposed in 2001, the HCMC metro system currently consists of six planned lines, only one of which is so far under construction: Line 1, running 19.7 km (12.25 miles) from Ben Thanh Market in the centre to Long Binh in District 9, in the east.

Largely financed by the Japan Bank for International Cooperation (JICA) and engineered by Japanese firms, the mostly above-ground line was due to become operational in 2018, an estimate since pushed back to 2020.

On January 27, the People’s Committee of Dong Nai, a province bordering HCMC to the east, proposed extending the line by 4.7 km (2.92 miles). If approved, the line would reach beyond the city limits into the economically vital province, home to more than 24 industrial parks. But such an extension, while benefiting Dong Nai’s factories and their workers, would most likely cause the completion date to be further delayed.

While the HCMC metro has a relatively clean safety record, it’s facing the same financial and deadline issues as its brother to the north. In November 2015, the line’s main contractors asked the HCMC government for US$ 90 million in compensation after the administration failed to carry out site clearance as scheduled, causing delays of up to two years. During the previous year, the amount of investment required for the line had more than doubled, from $1 billion to $2.5 billion, with the project management board citing design adjustments, price and wage increases.

HCMC Metro Line 1  – one of the world’s most expensive

A number of major commercial and residential projects are now either under construction or already open, with some advertising direct walkways to metro stations. The city’s District 2 and Binh Thanh District stand to benefit the most from this line, and huge mixed-used developments such as Masteri Thao Dien and Vinhomes Central Park are already altering the city’s skyline.

As with Hanoi’s metro, predicting the completion date of the HCMC metro system is all but impossible, but Line 1 should start bringing relief to the city’s overcrowded streets in the next few years.