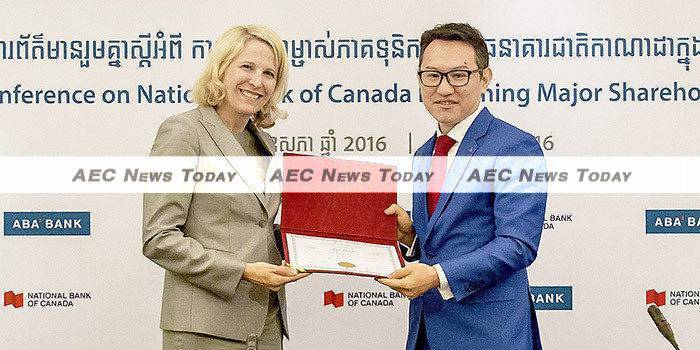 In a strong show of confidence in the Cambodia banking sector and the galloping Cambodia economy the National Bank of Canada (NBC) has paid US$103 million to increase its equity in Advanced Bank of Asia (ABA Bank) from 42 per cent to 90 per cent.

The increased investment raises the Canadian bank’s holdings in ABA Bank to $148 million and is the first time that a North American financial institution has taken a majority share in a Cambodian bank.

NBC first expressed interest in ABA Bank in 2014 with the purchase of a 10 per cent stake. In September 2014 it raised its shareholding in ABA Bank to 30 per cent, before increasing that to 42 per cent in January 2015.

Askhat Azhikhanov, ceo of ABA Bank described the acquisition by the NBC as one of ABAs major milestones since founding, made more auspicious coming during its 20th anniversary year.

“It demonstrates our strong position in the market, and our partner’s confidence in the strategy and growth of ABA Bank. The latest capital injection gives us unprecedented market opportunities and the ability to deliver more to our clients”.

According to Mr Azhikhanov the capital injection from the NBC will sustain ABA’s robust growth rates and boost its geographical expansion while maintaining adequate capital level.

“Our strategy will not change. We will continue to extend our branch network and will follow our strategy with separate focus on micro-, small and medium enterprises on the lending side and retail, corporate and institutional clients on the funding side”, he added.

According to Karen Leggett, NBC executive vice-president, the Canadian financial institution is constantly on the lookout for long-term investment opportunities in high growth markets.

“Cambodia, which is known for its strong economic prospects, was a natural fit.” ABA Bank caught our attention immediately. From the outset, we felt that this well-established institution, with good governance standards, would be a partner of choice.

“We both share a common view of matters such as: A commitment to local development; A willingness to offering the best quality of service possible; A dedication to creating value through digital banking solutions.

“NBC commenced operation more than 150 years as a financial institution by and for entrepreneurs. We have helped tens of thousands of businesses to get started, to grow, and prosper. We see a synergy with the way in which ABA Bank has done the same in Cambodia and we are delighted that the National Bank of Cambodia (NBC) and the government has approved our application”, she said.

According to banking industry sources the acquisition of ABA Bank is expected to add 17 cents to NBCs diluted earnings per share for the 2016 financial year which ends October 31, including a 12 cents per share gain following a revaluation of its earlier investments in ABA Bank.

The NBC-ABA Bank news came just one day ahead of an announcement that the International Finance Corporation (IFC) and the NBC had signed a memorandum of understanding (MoU) to strengthen corporate governance among banking and financial institutions in Cambodia.

Kyle Kelhofer, IFC country manager for Cambodia, Laos and Vietnam said the IFC will assist the NBC to enhance its regulatory, supervisory and enforcement capabilities to “improve transparency and risk management in the banking sector.”

Simultaneously the NBC will work with the IFC to develop a corporate governance code which will outline best practice procedures to be followed by banking and financial institutions across Cambodia.

These first two phases will be followed up with a series of public seminars to raise awareness of the new principles of corporate governance in the Cambodia banking sector.

According to Mr Kelhofer these measures will “help banking and financial institutions mitigate lending risks and increase access to finance for both businesses and individuals, which will in turn contribute to further sustainable economic development of Cambodia”.

The NBC’s deputy director general of Banking Supervision, Rath Sovannorak, said the expectation is that the project will “send a strong message about the banking sector’s commitment to further improve upon its corporate governance practices and thus integrate into the global financial system”.