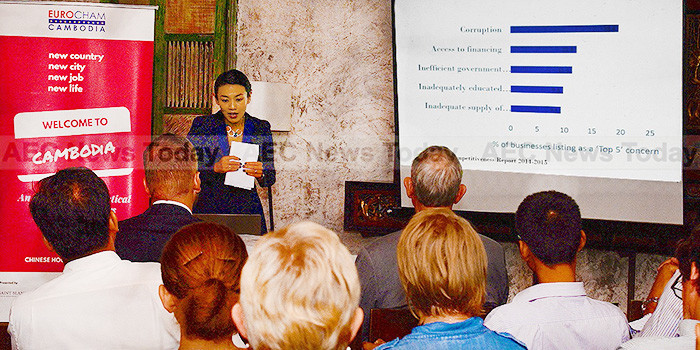 Chambers of Commerce and board’s of trade have been acting as a bridge between business owners and officials for more than 500 years, with the first recorded Chamber of Commerce being established in the Port of Marseille, France in 1599.

In a world where business stands still for no-one, Chambers of Commerce provide a useful pool of resources that can make entering a new market and doing business considerably more easy. Nowhere more is this the case than in developing markets where success can be heavily influenced by how quickly you can get plugged-in to the local business and regulatory scene.

To help new-comers to Cambodia become familiar with the processes, methods, and services available to assist them in their relocation, EuroCham Cambodia, the kingdom’s largest Western business association, last week held a familiarity evening at Phnom Penh’s iconic China House.

Established in 2011 and boasting some 235 members, EuroCham Cambodia provides advocacy, services, and networking opportunities for those wishing to establish a business, or career in Cambodia.

During the ‘Welcome to Cambodia’ briefing attendees heard that the main competitive advantages of Cambodia as a destination for establishing a business included the ability to fully own a business or company in the kingdom, deregulation of most industry sectors, as well as its low cost of labour.

On the downside, attendees were told there was a shortage of quality and skilled human resources, meaning recruitment could become a lengthy process, while ease of doing business and transparency were additional hurdles.

The ‘new arrivals’ were also given a quick run through Cambodia history, the political system, and the investment potential and opportunities available in nine industry sectors. Several EuroCham Cambodia members also provided details on the diverse range of professional services they offered.

One of the common messages running throughout the mini-seminar was the importance of networking. Making connections by attending social functions with one or two boxes of name cards was, they were told, crucial (See: KJCC Business Networking Brings Together Cambodia’s Biggest Investors).

To provide the new arrivals with a fully immersive Phnom Penh business community experience the formal presentation was followed with a two-hour EuroCham Cambodia networking function where the ‘newbies’ were able to rub shoulders – and exchange name-cards – with more than 100 of Cambodia’s most established European business owners and executives.

Buoyed by the success of its first ‘Welcome to Cambodia’ seminar EuroCham communication manager Anthony Morreale said the number of attendees showed that there was a need for such events. “We will certainly be evaluating the feedback we receive with a view to holding similar events in the future. Whether that will be in six months time or longer is too early to say just yet”, he added.