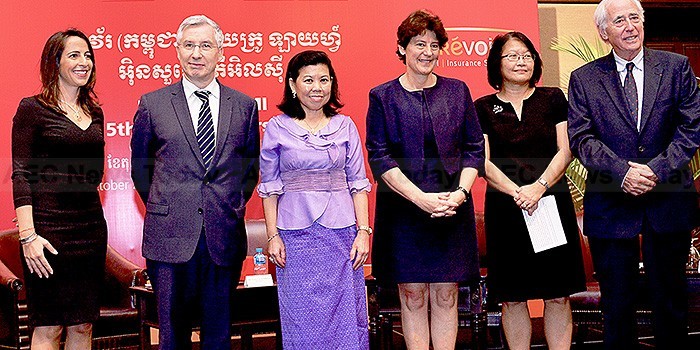 Often considered as somewhat of a luxury, the Cambodia insurance sector is regarded as one of the country’s most important pillars of the finance sector.

According to Cambodia Ministry of Economic and Finance (CMEF) secretary of state Ngoun Sokha, by providing a buffer against the poverty inducing burden of sickness, incapacitation, or death, the Cambodia insurance sector is helping to improve the lives of poor working-class Khmer.

Ranking only second in importance to the Cambodia banking sector, Ms Ngoun said the continued development of the Cambodia insurance sector is a key plank of Cambodia government policy because of the benefits it provides, particularly to those at the lower end of the socio-economic spectrum.

While acknowledging the benefits life and health insurance provide to those members of Cambodia society most at risk of suffering economic hardship due to illness or disability, Ms Ngoun also cautioned that companies needed to work hard to earn the trust of the community if the sector was to continue growing.

Insurance should be easy to understand; insurance products should be flexible and affordable; and insurance companies should be compassionate and claims processed quickly when they are made, she said, adding that well trained staff are a necessity if Cambodia’s under-educated working class are to understand the financial safety net such policies can provide.

Offering a limited range of individual and group health, accident, and life insurance policies targeted to meet the needs of low- and middle-income earners, PKMI, has managed to create a viable market from what was previously a greenfield sector.

With a network of some 207 health facilities across Cambodia where its customers can receive medical treatment and have the charges billed directly to it, PKMI, Ms Ngoun said, appeared to be offering the products and services that mirrored what the government expected.

Joining in the celebrations Solene Favre, CEO of PKMI reminded those present that the 106-year-old French parent company owed its success to the trust it built with its clients, suppliers, and partners, and by providing products tailored to meet the needs of clients.

Acknowledging the more than 187.5 per cent compounding annual growth (CAG) in clients covered and an almost 185 per cent CAG in policies over the last three years, Ms Favre said she expected the next five years to see just as impressive growth as more people became aware how PKMIs policies could help them.