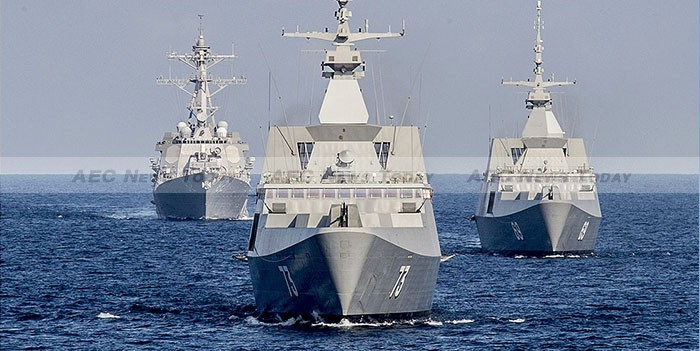 As defence chiefs from 26 countries gathered for the annual Shangri-La Dialogue security summit in Singapore in May, all eyes were on the US Secretary of Defense Ashton Carter and his Chinese counterpart Admiral Sun Jianguo, Deputy Chief of the General Staff of People’s Liberation Army (PLA).

As expected, maritime disputes in the South China Sea dominated the event. But another equally important topic for discussion were the security challenges faced by small states in the Asia Pacific.

There has been a strong call for more cooperation among countries in the region, especially in Southeast Asia, to tackle these problems. Despite many efforts, progress is still slow and in some cases disappointing.

The refugee crisis in the Andaman Sea and the Malacca Straits is a case in point. Boats carrying thousands of Rohingya and Bangladeshi refugees were pushed away by Thailand, Malaysia and Indonesia after they were given food, water and fuel to continue their journeys.

The whole saga sparked an international outcry and seriously damaged Asean’s image as a community. It took Asean ten days to reach an agreement on a temporary settlement. But in fact, the exchanging of accusations and buck-passing do not come as a huge surprise. It is not the first time that Asean member countries have failed to fulfil their obligations.

There are a number of key factors that continue to hinder Asean’s ability to effectively address these security challenges. The lack of leadership is perhaps the single biggest culprit. Member countries are reluctant to take the lead for fear of shouldering a greater share of the burdens.

A huge development gap among them further exacerbates this issue. It is extremely hard if not impossible to expect a few members to invest disproportionate resources in the security of the whole community.

Another problem is the lack of training, skills and technology among smaller, poorer Asean members to identify potential security threats and to proactively mitigate against damaging consequences. Surveillance systems and intelligence collection remain limited even as transnational crimes are becoming more sophisticated and complex. Growing self-radicalisation through social media is proving even harder to detect.

What is happening is that countries in the region are significantly increasing their defence budgets to upgrade their weapon systems and strengthen their capabilities.

There is no doubt that this is the most pragmatic solution for Asean member countries since the region is far from being at peace. But it is not a long-term solution.

While some members are more capable of responding to such security threats, others are still lagging far behind. As a result, they could well become breeding grounds for transnational crimes and terrorism.

Thus far, Asean has introduced a number of crucial initiatives to address these challenges, such as the Asean Defence Ministers Meeting (ADMM) and ADMM-Plus.

Their aims are a better understanding of the security situation in the region and strengthened cooperation among member nations to enhance peace and stability. Malaysia has also proposed the creation of a joint Asean peacekeeping force (APKF).

Of course the lack of trust remains a major stumbling block in regional cooperation. Further, the question of sovereignty is often at the centre of any talks about collective defence and security. Yet if these initiatives can at least provide a platform for peaceful dialogue and prevent a conflict from spiralling out of control, they are likely to help Asean member nations build mutual trust and deepen their relations over time.

There is no doubt that world powers have a potential role to play in addressing these issues. The Shangri-La Dialogue highlighted a number of initiatives in the region. The problem is that some of these initiatives are often perceived as a strategy to contain China or to curtail China’s influence in the region. Asean member states are therefore often placed between a rock and a hard place.

This balance of power manoeuvring will surely undermine the ability of Asean member nations to take bold decisions to confront some of the most critical security challenges facing the Asia Pacific at the moment.

Thus, rather than dividing the region further, world powers should work together to support the security frameworks and tools proposed or already created by Asean, which is in desperate need of security leadership, funding, training and technology.

Southeast Asian nations have suffered enough from great power competition since the Cold War, and they do not want to be drawn into such conflicts again.

Almost all of them do not want to be seen either as the ally of the United States or of China. They want a genuine balance of power that would ensure regional peace and stability. It is now time for the United States, China and other major powers to support Asean member states’ leadership in addressing these security challenges.

Phoak Kung is the co-founder and president of the Cambodian Institute for Strategic Studies (CISS). This article first appeared on East Asia Forum under a Creative Commons license and is reproduced here with its permission

With no #SpaceOnEarth, Ogilvy gives Rohingya children a ‘voice in space’ (HD video)