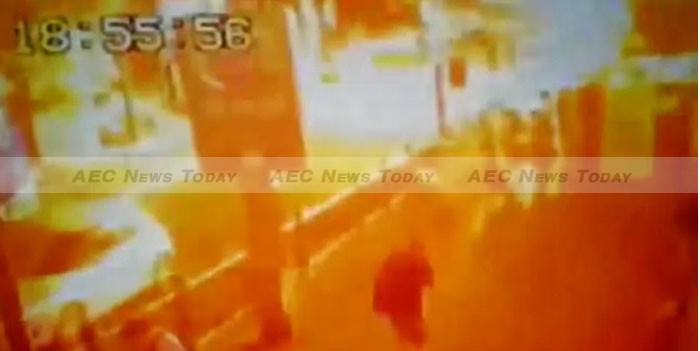 Twin bomb explosion in central Bangkok earlier this evening have left at least 15 people dead and up to 80 people injured, though some unconfirmed local media reports put the figure as high as 27 dead, including a number of Chinese tourists.

The explosion occurred at around 6.55pm local time near the Erawan Shrine in the central Chidlom district at a time when road and pedestrian traffic would have been heavy as Thai office workers made their way home and tourists and expatriates were heading out for dinner or to the nearby adult entertainment zones.

Photos shared on the micro-blogging platform Twitter showed a scene of mayhem and destruction marked by the bright crimson stain of blood. Other photos showed burnt motorcycles and cars, while still others showed injured and dead people on the ground.

Thomas Fuller from the The New York Times described seeing blood spatter up to two-floors high, while the BBCs Jonathan Head described the area as being littered with body parts.

Quoting national police spokesman Lieutenant General Prawut Thavornsiri news agency Agency France Press (AFP) reported: “I can confirm it was a bomb, we can’t tell which kind yet, we are checking”.

Thai police also confirmed finding two other unexploded bombs in the immediate vicinity, one attached to a support pillar for the BTS Skytrain.

A popular tourist attraction in the centre of Bangkok, Erawan Shrine houses a statue of Phra Phrom, the Thai representation of the Hindu creation god Brahma.

Located directly opposite the Bangkok Police Hospital and one of the world’s largest shopping centre, Central World, Erawan Shrine was built in 1956 to neautralise bad karma believed to have been caused by laying the foundations for the nearby government-owned Erawan Hotel on the wrong date,.

The intersection was the scene of protracted political protests by the United Front for Democracy against Dictatorship (UDD) in 2010 and by the so-called People’s Democratic Reform Committee (PDRC) in 2013.

On Twitter the Royal Thai Army (RTA) 1st Army Area which covers Bangkok demanded an end to sharing of pictures of dead Bangkok bomb victims, and ordered the deletion of images already shared; army chief General Udomdej Sitabutr said no state of emergency would be implemented as a result of the Bangkok bomb.

At the time of writing Thai military and civil authorities were checking nearby Silom, Pathumwan, Thonglor and Sukhumvit Roads for other possible bombs.

The US Embassy in Bangkok issued an ‘Emergency Message for US Citizens’ advising them to “avoid the area and monitor local media reports”, while the Japanese Embassy Bangkok said it was urgently attempting to ascertain if any Japanese citizens had been caught in the Bangkok bomb.

Deputy Bangkok governor Amorn Kitchawengkul said that all schools run by the BMA will be closed on Tuesday, though banking, finance, and retailers in the vicintity of the Bangkok bomb said they would open as usual.

According to the China Embassy in Bangkok the dead included ten Thais, three Chinese one Filipino, and four people whose nationalities were not immediately identifiable.

No group immediately claimed responsibility for the Bangkok bomb, however Thailand has been fighting a long-running insurgency by Muslim separatists in its three southern provinces.

The Thai army seized administrative power in a bloodless coup d’état on May 22, 2014 and dissent over the suspension of democracy and restrictions on freedom of expression has been growing as the ruling junta proceeds down a so-called reform path leading to democratic elections at some time in the future.