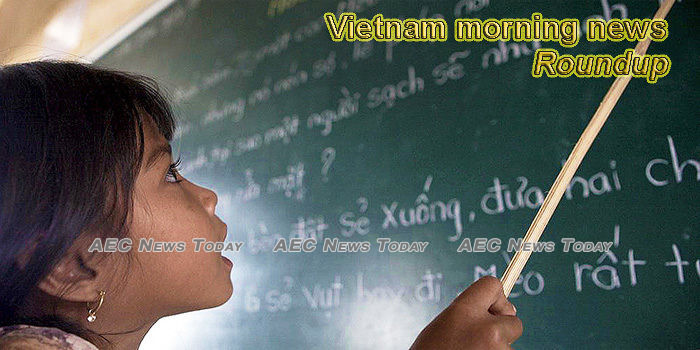 Material autonomy key for Vietnam to fully tap EVFTA
Textile stocks have been on a temporary upswing thanks to the recent ratification of the EU-Vietnam Free Trade Agreement (EVFTA) but textile enterprises still face difficulties due to heavy dependence on imported raw materials and machinery as well as reduced demand worldwide.
— VietnamPlus

Vinaconex to gain $35.8 million from VCP shares
Vinaconex corporation has registered to divest all of its 16 million shares in Vinaconex Power Investment Construction and Development JSC.
— Viet Nam News

Two more patients discharged in Vietnam’s coronavirus hub
Two natives of Vinh Phuc Province who were infected with the Covid-19 were discharged from a hospital in Hanoi Tuesday.
— VnExpress

Chickens from Vietnam banned
Prime Minister Hun Sen has ordered Minister of Agriculture, Forestry and Fisheries Veng Sakhon to take action to prevent the spread of bird flu (H5N1) from Vietnam into the Kingdom as an outbreak of the disease plagues southern Vietnam.
— The Phnom Penh Post

Cement demand forecast to climb 4-5% this year
The Ministry of Construction has forecast cement demand will increase by 4-5 per cent this year thanks to a recovery in the real estate market.
— Viet Nam News

Overseas investors are interested in education investment
As of 2019, Vietnam counted five foreign invested universities, 68 private schools and 170 public ones. The country had more than 500 programmes linked with top universities in the world. The foreign direct investment (FDI) in education from August to October 2019 reached 97 million USD.
— Vietnam Insider

HCM City first metro line fully linked, track to be laid for operation next year
A ceremony to mark the physical linking of the entire under-construction first metro line in HCM City between Bến Thành Market in District 1 and Sui Tiên Theme Park in District 9 was held on February 17.
— Viet Nam News

Vietnam PM lauds anti-corruption accord with Russia
Prime Minister Nguyễn Xuân Phúc on Monday (Feb 17) congratulated the Government Inspectorate of Vietnam and the Russian Presidential Anti-Corruption Directorate on their expansion of anti-corruption cooperation.
— The Star Online

EU: Press Vietnam on Human Rights Reforms
The European Union should press Vietnam to end its systemic repression of human rights and release political prisoners and detainees, Human Rights Watch said today. A human rights dialogue between the EU and Vietnam is scheduled for February 19, 2020 in Hanoi.
— Human Right Watch

KrisEnergy to sell Vietnam oil block and focus on diversion to Cambodia field
Singaporean oil and gas company KrisEnergy has decided to give up one of its oil exploration blocks in Vietnam to focus on its operations in Cambodia.
— Khmer Times

I flew on Vietnam’s award-winning budget airline known for its bikini-clad flight attendants 3 times in one week, and it was an emotional rollercoaster
When investigating which airline I should take from Seoul, South Korea to Ho Chi Minh City, Vietnam, I stumbled upon something I had never seen on a flight before: bikini-clad flight attendants, working for a budget Vietnamese airline called Vietjet Air.
— Business Insider

EU Approves Trade Deal With Vietnam
The European Union has approved a trade agreement with Vietnam, disproving skeptics who thought the EU’s divorce with Britain and Vietnam human rights concerns would delay the vote.
— VOA

Profitability in shrimp sector depends on sustainability, says Boston Consulting Group
Global shrimp producers’ long-term profitability depends on carefully instituting reforms to increase sustainability and lower risk – a lesson that can be garnered from the experiences of Thailand, Vietnam, Indonesia, and India, according to a new series of reports.
— Seafood Source

Vietnam F1 Grand Prix gets go-ahead despite virus fears
Vietnam”s inaugural Formula One Grand Prix will take place in Hanoi in April as planned, organisers said yesterday, avoiding the fate of the Chinese Grand Prix which was postponed over the deadly coronavirus outbreak.
— Menafn

The US-China Phase One Trade Deal and Vietnam
The US and China signed a much-anticipated phase one trade deal on January 15, 2020. This initial trade deal is seen as the first step towards a de-escalation of the US-China trade war now ongoing for more than 18 months.
— Vietnam-Briefing

Project to help women entrepreneurs
Vietnamese enterprises, especially women-owned businesses, are still facing many difficulties and barriers in developing and accessing resources, such as credit and land.
— Viet Nam News

Few Vietnamese firms make use of financial support policies of Government
Nine years after the issuance of a Government decision that set out preferential credit policies to provide more financial support for Vietnamese firms in the supporting industry, few have been able to make use of said policies, industry insiders have said.
— Vietnam Insider

Project to help women entrepreneurs
Vietnamese enterprises, especially women-owned businesses, are still facing many difficulties and barriers in developing and accessing resources, such as credit and land.
— Viet Nam News

Vietnam to go for difficult option amid Covid-19 outbreak
The government is committed to ensuring not only the best business environment, but also the best living environment for the people and investors.
— The Hanoitimes

Ride-hailing cars must display taxi signs
All cars providing passenger transportation services via ride-hailing applications will be treated like taxis from the beginning of April, when the pilot project for tech-based cars ends.
— Viet Nam News

Material autonomy key for Việt Nam to fully exploiting EVFTA
Textile stocks have been on an temporary upswing thanks to the recent ratification of the EU-Việt Nam Free Trade Agreement (EVFTA) but textile enterprises still face difficulties due to heavy dependence on imported raw materials and machinery as well as reduced demand worldwide.
— Viet Nam News

VietJet to expand India presence
Vietnamese budget carrier VietJet will be expanding its presence in the Indian market with the commencement of three new flights.
— TTG Asia

Pork price dives under VND75,000 per kilo
Some large livestock companies have reduced pork prices to an average of VNĐ75,000 per kilo, Minister of Agriculture and Rural Development Nguyen Xuân Cường said after visiting the firms on February 16.
— Viet Nam News

Financial support still pie in the sky for supporting firms
Trần Thị Thu Trang, director-general of Hanel PT, an electronics maker in northern province Bắc Ninh said her company had given up on seeking access to the preferential credit policies after extensive research.
— Viet Nam News