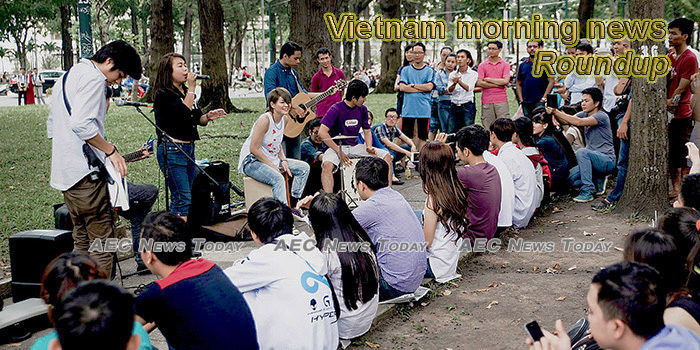 Vietnam’s COVID-19 cases up to 35 after new infections from Europe
Weeks after Vietnam declared that all 16 of its COVID-19 cases had recovered, the number of infected patients is on the rise following the reintroduction of the virus on a flight from Britain.
— Channel NewsAsia

Banking human resources change in Industry 4.0
The fourth industrial revolution (Industry 4.0) has a great impact on the human resources of the banking sector, according to the general director of Việt Nam Prosperity Joint Stock Commercial Bank (VPBank).
— Viet Nam News

VOG exports the first Italian apples to Vietnam
A first for the Association of South Tyrolean Fruit Cooperatives: At the beginning of March, the first container of native apples was loaded up for Vietnam. The cargo, a total of 8 tons of apples, will arrive in Asia in a little less than a month.
— Fresh Plaza

Vietnam’s European visa rules change adds to doubt over race
In the round-up: Vietnam has extended its cancellation on visa-free travel to more European countries due to Coronavirus, presenting further obstacles to the promoters of their scheduled race on April 5th.
— Racefans

ADB: outbreak to cost Vietnam 0.41% of GDP
Vietnam is forecast to lose some 0.41 per cent of GDP due to the novel coronavirus outbreak, according to the latest report by the Asian Development Bank (ADB).
— The Phnom Penh Post

Import tariffs on pork expected to decline
The Ministry of Industry and Trade (MoIT) on March 9 announced detailed information about the current situation of the import of pork and actions to stabilize the market price amid the situation that the price of pork remained at high levels, imports of pork were low, and the import tariffs were high while the Prime Minister had entrusted relevant departments to implement measures to reduce the price of pork to below VND75,000 per kilogram.
— Sggp News

Cement producers face multiple problems
Cement producers in Việt Nam are facing a double challenge with domestic demand falling due to a slowdown in the property market and delays in transport infrastructure works and exports declining due to the Covid-19 epidemic.
— Viet Nam News

Hydropower operation must ensure security, production
The operation of hydropower dams must not have negative impacts on public security or production, the Ministry of Natural Resources and Environment has said.
— Viet Nam Net

CORONAVIRUS: 25 DUTCH QUARANTINED IN VIETNAM HOTEL
A group of 25 Dutch tourists are quarantined in a hotel in the Vietnamese coastal town of Hoi An, a spokesperson for TUI Nederland confirmed to NU.nl on Wednesday. During a domestic flight, the group was on a plane with a person possibly infected with coronavirus Covid-19.
— NL Times

Local Vsmart phones reports better sales than Apple in retail channel
Phones made by local manufacturer Vsmart have surpassed those of US giant Apple, in terms of retail revenue in the Vietnamese market in January.
— Viet Nam News

TAB proposes halving tax for tourism businesses
The Việt Nam Tourism Advisory Board (TAB) has proposed to half value added tax for the tourism sector from 10 per cent to 5 per cent to help businesses deal with the coronavirus outbreak.
— Viet Nam News

Setting rules for household businesses poses questions
Regulating household businesses in Việt Nam is posing several problems as lawmakers debate whether the rules should be included in the amended Law on Enterprise or developed into separate legislation.
— Viet Nam News

VN enhances rice, pork price stabilisation
The Ministry of Industry and Trade has asked rice traders to strictly maintain a reserve equivalent to at least five per cent of their export volume in the six most recent months as well as enhancing efforts of price stabilisation in the domestic market amid ongoing global uncertainties.
— Viet Nam News

VN-Index rebounds after Monday’s crash
Investors calmed down on Tuesday after a crash in the previous sessions, led by recovery of some major large-cap stocks.
— Viet Nam News

Newsman jailed in Vietnam over land deal
A court in Vietnam has jailed a journalist known for his criticism of the ruling Communist Party for 10 years over a land deal dating from the early 2000s that the authorities had deemed illegal, state media said yesterday.
— The Straits Times

Hanoi broadcasts lessons on TV as schools remain shut
Pupils in ninth and twelfth grade in Hanoi will be able to keep up with courseworks as schools remain closed during the COVID-19 epidemic until March. According to the televised teaching scheme announced by the Education Department and Hanoi Television, lessons are available on Channel 1 daily starting from March 9.
— VietnamPlus

HOW A RYE PROJECT IS BATTLING FOOD INSECURITY IN VIETNAM
Over 2,500 Vietnamese children in preschools have received fortified instant porridge as part of a shared initiative between Ryerson’s Centre for Studies in Food Security (CSFS) and Vietnam’s National Institute of Nutrition (NIN).
— The Eye Opener