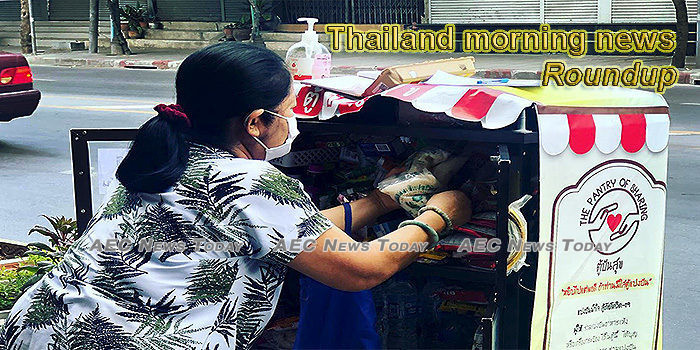 Fate of emergency decree to be decided Thursday
Officials will decide on Thursday on the future of the emergency decree, which is due to end on May 31, National Security Council secretary-general Somsak Roongsita said on Wednesday.
— Bangkok Post

More trouble for ailing Thai Airways as Airbus calls in its debts
Even as struggling national flag carrier Thai Airways strives to come up with blueprint for financial recovery, Airbus is calling in its debts on 30 aircraft rented by the airline.
— The Thaiger

Thailand leads SE Asia markets higher on rate cut
Most Southeast Asian stock markets rose on Wednesday, with Thailand leading the pack, after the Bank of Thailand cut its benchmark interest rate to a record low to cushion the economy from the coronavirus impact.
— Bangkok Post

Thai Airways: Up in the Air
The national carrier is flying into turbulence, and its woes are being compounded by a near-standstill in global air travel.
— ISEAS

Opposition wants more time to debate 1.9 trillion baht loan decrees
The Opposition has voiced objection to the duration of the three-day parliamentary debate on the Government’s three executive decrees, to seek 1.9 trillion baht in loans, claiming that they need more time because of the huge amount of indebtedness the loans create.
— Thai PBS News

Thailand says it expects COVID-19 vaccine next year after tests in mice
Thailand expects to have a vaccine for the novel coronavirus ready next year, a senior official said on Wednesday (May 20), after finding positive trial results in mice.
— CNA

10 years and still counting: Activists gather to seek justice for 2010’s dead
A small crowd gathered early Tuesday evening around Ratchaprasong intersection to commemorate the scores killed when massive street protests were put down violently by the army on May 19, 2010.
— Coconuts Thailand

Thailand detains 15 Rohingya migrants for illegal entry
Police in Thailand have arrested 15 Rohingya Muslims on charges of illegal entry and are investigating the possibility that they could be victims of human trafficking.
— CNA

COVID-19 to stay for 1-2 more years, public cooperation key to success
The Chief of the Thai Red Cross Emerging Infectious Diseases Clinical Center (TRC – EIDCC) at King Chulalongkorn Memorial Hospital has warned members of the public that the ‘second wave’ of the COVID-19 outbreak will likely happen.
— Newsline (video)

Most parts of PDPA to be deferred by a year
The cabinet has agreed to postpone the enforcement of most chapters of the Personal Data Protection Act (PDPA) by a year to give the public and private sectors time to prepare their internal processes and ease the financial burden they are shouldering during the coronavirus pandemic.
— Bangkok Post

Thailand leads ASEAN in 5G rollout due to pandemic
The novel coronavirus pandemic has prompted Thailand’s major telecom operators to rev up deployment of fifth-generation technologies, making it the first country in the 10-member Association of Southeast Asian Nations to have commercial 5G services.
— Nikkei Asian Review (paywall)

FTI supplies Hospital Medical Innovations for COVID-19 Patients
Although the number of new COVID-19 patients is reducing every day, many sectors are still maintaining their effort to eliminate the disease.
— Newsline (video)

Thai Airways union backs down, supports bankruptcy restructuring
The Thai Airways workers union will not oppose the government’s plan to reduce holdings in the airline and petition for restructuring through the bankruptcy court, the union’s president said on Wednesday.
— Bangkok Post

Temple closes to mark decade since redshirt crackdown
A Bangkok temple, where 6 people were shot and killed by the military during the 2010 “redshirt” political protests, has closed during the tragic event’s 10 year anniversary.
— The Thaiger

Thai Airways must ‘stand on its own feet,’ PM says of bankrupt national airline
Prime Minister Prayuth Chan-o-cha has defended the “difficult decision” to send the national carrier to bankruptcy court in a carefully worded English statement.
— Coconuts Thailand

Baht is Asia’s top outperformer on tourism rebound bet
After lagging other Asian currencies for most of the year, Thailand’s baht has staged a sharp rebound to outperform its peers.
— Bangkok Post

Organic rice gets trade boost
The Commerce Ministry has registered a domain for Thai farm and food products, TraceThai.com, with local organic rice chosen as the pilot product given its high value, strong market demand and export potential.
— Bangkok Post

‘Hygienic’ Carts Launched for a Better Street Food Culture
New street food carts unveiled Wednesday by a university come with a promise to make the food culture cleaner and more friendly to the environment.
— Khaosod English

Pattaya police chief battles Thailand’s Iron Chef in cook-off for the needy – VIDEO
Police in Pattaya are doing more than continue their project to cook food for the needy and unemployed: yesterday they had an upbeat cook-off between the police chief and a famous Thai TV chef.
— The Thaiger

New normal: Shopping at malls a lonely experience as Bangkok emerges from COVID-19 lockdown
Jenjira Mitakhot did not expect to hang out with her friend across a divider when they revisited Central World for the first time in nearly four months.
— CNA

5 dead in high speed Surin crash
5 are dead after a pickup truck traveling at high speed crashed into a Mitsubishi Pajero in Issan’s Surin province yesterday.
— The Thaiger

Universities Set up Funds for Students Affected by COVID
Prominent universities around Thailand are taking action to help students whose livelihood has been affected by the coronavirus pandemic.
— Khaosod English