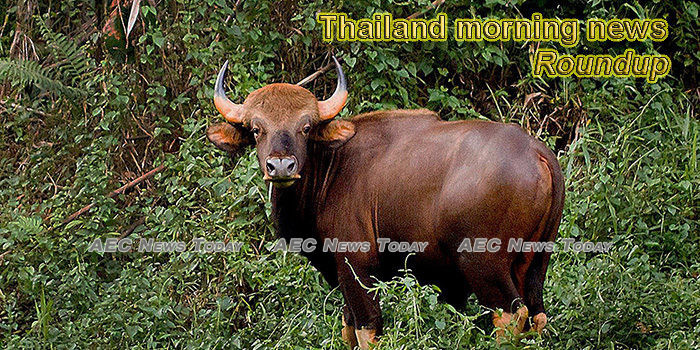 Thailand’s global ranking for COVID-19 infections improves slightly
Thailand’s ranking, by number of confirmed COVID-19 infections, has improved from 15th to 16th place, a position it shares with Australia, based on WHO figures, according to Dr. Thaweesilp Wissanuyothin, a senior doctor attached to the 10th Health region.
— Thai PBS News

B100bn relief package for virus
The Finance Ministry has launched a huge relief package including cash giveaways to many more individuals beyond the 14 million people with annual base incomes not exceeding 100,000 baht and who are registered as poor to help cushion fallout from the spread of the new coronavirus.
— Bangkok Post

Thai Prime Minister states that Thai workers returning from South Korea will be quarantined
To allay Thai public concern over COVID-19 being spread by Thai workers returning from South Korea, Thailand’s Prime Minister confirmed today that all the returnees, from the cities of Daegu and Gyeongsang, will be quarantined, for a mandatory 14 days, at appropriate facilities near their residences, whether they are infected with the virus or not.
— The Pattaya News

Economy ‘may shrink’ if virus impact drags on: JSCCIB
The economy might not grow in the first half of 2020, and could even contract over the full year, if the coronavirus epidemic drags for longer than a few months, the Joint Standing Committee on Commerce, Industry and Banking (JSCCIB) said on Wednesday.
— Bangkok Post

Premier, cabinet donate salary to battle outbreak
Prime Minister Prayut Chan-o-cha and cabinet ministers will donate at least a month of their salaries to the fight against the Covid-19 virus, government spokeswoman Narumon Pinyosinwat said on Tuesday.
— Bangkok Post

FPO: Bank of Thailand feels pressure to cut rates
The Federal Reserve’s emergency rate cut will put pressure on the Bank of Thailand to follow in its footsteps, according to a senior official at the Fiscal Policy Office (FPO).
— Bangkok Post

More than 1,100 Thai’s returning from South Korea before March 1st cannot be located
Thailand’s Ministry of Labour has expressed concern that the whereabouts of 1,181 Thai workers, who returned from South Korea between February 24th and March 1st, are currently not known and the ministry is seeking help from the Immigration Bureau to find them.
— Thai PBS News

Pattaya City cancels or postpones nearly every City sponsored event through September due to Covid-19 Coronavirus, Songkran still in discussion at national level
Pattaya Pattaya City Hall held a meeting this afternoon with city leaders and the Mayor and have announced that due to the worldwide outbreak of the novel Covid-19 Coronavirus they have decided to postpone or cancel nearly every City sponsored event through September of 2020.
— The Pattaya News

Workers returning from S Korea with fevers
Of 180 Thai workers who arrived back from South Korea through airports in the past three days, 19 were feverish but tested negative for Covid-19, immigration police said on Wednesday.
— Bangkok Post

WTO suspends dispute settlement meeting over PH-Thai cigarette tax row
The World Trade Organization (WTO) yesterday officially announced that the Dispute Settlement Body (DSB) meeting on February 28 was suspended due to a disagreement between the Philippines and Thailand regarding the Philippines’ request to impose retaliatory measures on imported Thai goods.
— Manila Bulletin

Despite ban, Thanathorn vows to keep fighting for Thai democracy
The former leader of Thailand’s dissolved opposition Future Forward Party vowed to carry on campaigning for true democracy in the Southeast Asian kingdom, despite a 10-year ban from politics.
— Nikkei Asian Review (paywall)

Cabinet approves 225 million baht budget to produce more face masks
The Cabinet this week approved a budget of 225 million baht to produce 50 million cloth masks, which will be distributed to the people nationwide, amid the concerns over COVID-19 and air pollution.
— Newsline (video)

Govt ‘too busy’ to reshuffle cabinet
The government is busy with urgent problems and has no time to think about a cabinet reshuffle, according to ministers and government MPs.
— Bangkok Post

Authorities ask Thai workers back from Korea to isolate themselves
The administration is working to find suitable actions to help illegal Thai workers in South Korea who have requested to be repatriated home, as the COVID-19 situation in the country intensifies.
— Newsline (video)

Thailand’s mega-computer fair to be held as planned
Shrugging off fears of the COVID-19 outbreak, organizers of the annual mega-computer fair said on Wednesday that its ‘Commart X Pro 2020’ IT fair will be held on schedule from March 5-8 in Bangkok.
— Xinhuanet

Water management agencies host public talk to treat this year drought
The Office of the Royal Society and the Office of National Water Resources and other water management sectors have held talks on the “2020 Drought and Salinity in the Water System”, seeking both short term and long term solutions.
— Newsline (video)

Govt moves to stop face-mask hoarding
The government has decided to take control of face-mask production in an attempt to end hoarding and shortages.
— Bangkok Post

Contagion tests eyed for passengers
Aviation agencies are planning to step up the screening of passengers from countries affected by Covid-19 and are assigning a small airport to specifically handle these flights.
— Bangkok Post

Manufacturers told to step up output amidst panic
The Industry Ministry has ordered manufacturers of facial masks and alcohol-based hand gels to boost their production capacities to serve escalating demand and overcome shortages and price gouging caused by panic surrounding the Covid-19 outbreak.
— Bangkok Post

Has Thailand had enough of Western tourists and their ‘entitlement’?
Thailand needs tourism. The industry that brings travellers to the country’s beaches, back alleys and Buddhist temples employed almost 6 million people, raked in US$109.5 billion and accounted for one in every five baht spent in 2018, according to the World Travel and Tourism Council.
— South China Morning Post

Public Health Ministry continues to hands out free face masks
The Ministry of Public Health has continued its campaign to hand out 100,000 face masks to the general public daily. The ministry sets a limit of three free masks per person.
— Newsline (video)

Tourism aid headed to economic cabinet
Large-scale measures to help tourism-related operators and employees affected by the coronavirus epidemic are set to go before the economic cabinet this Friday.
— Bangkok Post

Pair nabbed for spreading fake virus news
A Bangkok woman and another in Rayong were arrested on Tuesday for spreading fake news online about the coronavirus (Covid-19) outbreak, according to Digital Economy and Society Minister Buddhipongse Punnakanta.
— Bangkok Post

Ayuttaya man arrested with pistol, planning to shoot wife and her lover
Police in Ayuttaya, north of Bangkok, yesterday arrested a man carrying an unregistered handgun and ammunition, who told them he was on his way to shoot his wife and her lover a a nearby mall.
— The Thaiger

Major fire completely destroys recycling factory in Chonburi, no injuries
A major fire broke out yesterday at a recycling warehouse in Koh Jan district causing about 300 workers to flee from the fire.
— The Pattaya News

Teacher suspended for sexual abuse at Nakhon Pathom school
A teacher in Nakhon Pathom province just west of Bangkok, identified by students as a serial sexual predator, has been suspended an education official said yesterday.
— The Thaiger

Anutin Won’t Say Why He Withdrew Mandatory Quarantine Order
The health minister on Wednesday declined to explain why he removed an order that required people arriving from nine countries hit by the coronavirus to be placed in a self-quarantine.
— Khaosod English

Bangkok motor show postponed, book fair moved online
The Bangkok International Motor Show has been postponed and the annual Book Fair cancelled because of the danger of spreading the coronavirus.
— Bangkok Post

The top 10 most expensive condominiums in Bangkok
Bangkok is never short on luxury condominiums, and one new project keeps overtaking the others, in terms of price and amenities.
— The Thaiger

Gov’t Takes Full Control Over Distribution of Face Masks
The government on Wednesday said it will take full control over the distribution of face masks due to shortages arising from the fear of coronavirus outbreak.
— Khaosod English

Student movements blaze back, but for how long?
The dissolution of Future Forward Party has ignited a rash of campus rallies across the country. But will the unprecedented student activism be just a flash in the pan or will it evolve to become a new force that could threaten the Prayut government? Here, ThaiPBS World presents the first of a series of analyses that look at the making and the potential of the new campus activism.
— Thai PBS News

Chon Buri man kills neighbour with metal pipe after being refused a cigarette
Police in Chon Buri province, near Pattaya, arrested a 32 year old Thai man on Monday for allegedly beating his 51 year old neighbour to death with a metal pipe, after the neighbor refused to give him a cigarette.
— The Thaiger

Woman dead in Krabi climbing fall
A woman is dead after falling some 30 metres to the ground while rock climbing in Ao Nang, Krabi, across Phang Nga bay from Phuket.
— The Thaiger

Special buses will take Thai workers home when they return from South Korea
Special transport has been arranged, by the state-run Transport Company, to take returning Thai workers from the airports their homes once they land from South Korea, as a precautionary measure to avoid close contact with other people during their 14-day mandatory home quarantine period.
— Thai PBS News