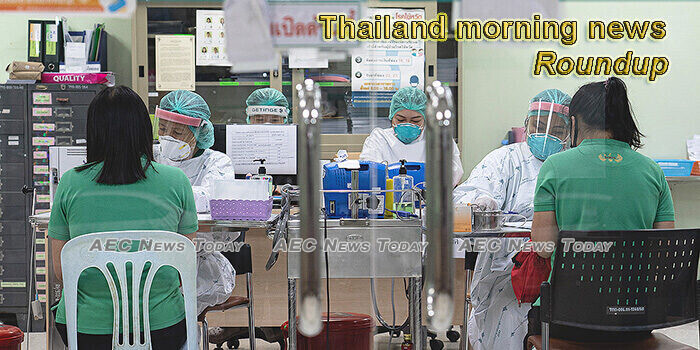 Airport usage less than half
Fewer than 5 million passengers have passed through the country’s 28 airports since the beginning of the year.
— Bangkok Post

May factory output down 23%
The manufacturing production index (MPI) for May dropped 23.19% from a year earlier, led by lower production of cars, petroleum and air conditioners due to the impact of the coronavirus outbreak, the industry ministry reported on Monday.
— Bangkok Post

COVID lockdown fails to curtail Phuket road deaths
Tens of thousands of people left out of work leaving Phuket to go home, no tourists, a nightly curfew for nearly three months, an alcohol ban and the deadly Songkran holidays being “postponed” has not stopped 34 people from dying on Phuket’s roads since the start of the year.
— The Phuket News

Thailand Looks Past Pandemic to Build $9 Billion Airport City
Thailand is looking past the pandemic and pushing ahead with a 290 billion baht ($9.4 billion) “airport city” aimed at creating a destination for travel and manufacturing, according to the head of the project.
— Bloomberg Quint

BMA ramps up plant management in urban areas
Staying with the environment, trees in the capital city are now better managed as the Bangkok Metropolitan Administration is making an effort to equip its staff with more comprehensive ways to take care of plants in urban areas. More details in this report.
— Newsline (video)

EEC Office targets B100bn in annual application value
Despite bearish investment sentiment caused by the coronavirus outbreak, the Eastern Economic Corridor (EEC) Office still aims to increase investment applications for the corridor by 100 billion baht every year, for a combined 300 billion baht between 2019 and 2021.
— Bangkok Post

Thailand artificial rain-making operation plan adjusted as drought looms
The Department of Royal Rainmaking and Agricultural Aviation has adjusted its plans for artificial rain-making operations to increase water in reservoirs across the country and to assist farmers in areas, which could experience water scarcity due to delay in rainfall.
— Pattaya Mail

Red tape postpones NT launch until January
The merger of state telecom enterprises TOT and CAT will conclude next January, instead of this July as originally scheduled, due to the coronavirus crisis and bureaucratic snags, says the Digital Economy and Society (DES) Ministry.
— Bangkok Post

Nightlife to resume, some foreigners allowed in
All night entertainment venues, including wet massage parlours, will open their doors again on Wednesday and some foreigners will be allowed into the country, but not tourists, as virus lockdown restrictions are further eased.
— Bangkok Post

Virus expert thanks 300 ‘heroes’ for donating plasma
Chulalongkorn University expert virologist Dr Yong Poovorawan today (June 29) thanked a number of “heroes who have recovered from Covid-19 and later donated plasma” in the fight against the virus.
— The Nation

Universal Health Care Supports Thailand’s Coronavirus Strategy
Thailand has been relatively successful at containing the spread of the coronavirus. Many say it’s due in no small part to Thailand’s universal health care system.
— NPR

Thailand seeks ‘Covid-19 bounce’ from property investors, upmarket tourists
With sea-view condos and golf courses being perused over video calls from the United States, Hong Kong and India, Thailand’s property market is hanging its hopes on a “Covid-19 bounce” from foreign buyers scouring an uncertain world for a safe haven during the pandemic.
— South China Morning Post

Thailand’s tapioca output forecast to drop in 2020-2021 crop
Thailand’s overall tapioca production for the 2020-2021 crop would be below 20 million tonnes, compared with 20-22 million tonnes in the 2019-20 season, Boonchai Srichaiyongpanich, President of the Thai Tapioca Trade Association, has predicted.
— Vietnamplus

Covid is biggest worry for new school year in Thailand: Poll
As the July 1 opening of the new school year approaches, people are most concerned about measures to protect children from COVID-19, according to the results of an opinion survey by the Suan Dusit Rajabhat University or Suan Dusit Poll.
— Khmer Times

Narumon unfazed by criticism of new role as Palang Pracharat’s economic team leader
The Thai Government’s spokeswoman, Mrs. Narumon Pinyosinwat, appears unperturbed by doubts being expressed about her capabilities and economic expertise, after she was recently chosen to lead the economic team of the ruling Palang Pracharat party.
— Thai PBS News

‘Deserted as Never Before’ Virus Knocks Thai Tourism Into Comatose
Hotels are shuttered in the dark, bars are closed and empty food carts are seen around Bangkok’s once-bustling tourism associated street.
— Khaosod English

Monument of Siamese Diplomat Stolen in France
The statue of a Siamese diplomat who led the kingdom’s delegation to establish relations with France has gone missing, a charity organization said Monday.
— Khaosod English

Stranded Filipinos fly home from Phuket
A total of 183 Philippine tourists stranded by the Covid-19 lockdown flew home on a special flight from this southern island province on Monday.
— Bangkok Post

Thai Law: FDA to Allow Private Medical Cannabis Production
Reopening its cannabis regulatory platform after months of disruption caused by the coronavirus, the Food and Drug Administration has prepared a draft bill to abolish a 5-year ban on the private sector making cannabis medicine.
— Khaosod English

America’s BLM movement sparks race discussion in Thailand
While the Black Lives Matter movement continues unabated in the US, a broader discussion on discrimination and racism is now being brought up on the other side of the world.
— The Thaiger

Many Thai National Parks set to re-open on July First
Natural tourist attractions in many provinces are preparing to open on July 1st, 2020.
— The Pattaya News

Cyber 1112: Thai pizza chain wants to deliver slices by drone (Video)
Chicken Deluxe, Seafood Cocktail or Tom Yum Goong? Whatever type of pizza you want, even plain old pepperoni, them slices could some day fall from the sky thanks to an autonomous aerial vehicle.
— Coconuts Thailand

Romp through a marigold farm for free in Buriram
Traipsing through a field of Insta-ready marigolds on a farm has become the latest reason to head east to Buriram province.
— Coconuts Thailand