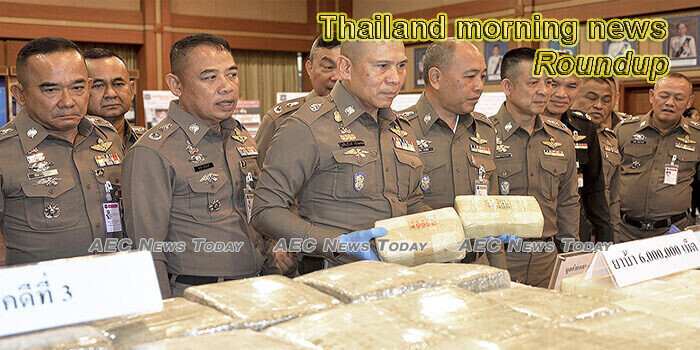 Banyin attempts suicide in prison after discovery of failed escape plan
Thailand’s former deputy commerce minister, Banyin Tangphaporn, tried to commit suicide while on remand at Bang Khwang maximum security prison last Friday, after prison officials uncovered alleged plots to kidnap the wife of the prison warden to hold hostage in return for his release and to escape while being taken to the court next Monday, if the first plan failed.
— Thai PBS News

Thailand to turn away from mass tourism, target the wealthy
The government’s tourism-revival strategy is to target big spenders seeking privacy and social distancing in the Covid-19 era, rather than try to attract a large number of visitors, according to Tourism Minister Phiphat Ratchakitprakarn.
— Bangkok Post travel

Prime Minister announces the government’s “New Normal” for post-Covid-19 era
Prime Minister plans to ask various sectors to propose a plan for the country to move forward and to improve citizens’ lives in the coming weeks.
— Prachatai English

CCSA promises reopening of nightlife venues
Thai nightlife will soon be back in full swing as a key member of the virus-fighting state agency on Sunday promised to allow pubs, bars, karaoke parlours and other entertainment venues to reopen their doors.
— Bangkok Post

Keep Supoj off Justice Ministry sub-committee: corruption watchdog
The Anti-Corruption Organisation of Thailand (ACT) on Sunday submitted an open letter to Justice Minister Somsak Thepsuthin, voicing opposition to the appointment of Supoj Saplom, a former permanent secretary for transport, to sit on a sub-committee tasked with studying a project for rehabilitation and development of inmates.
— Bangkok Post

Thailand’s impressive battle against COVID-19 result of decades-long efforts
It has taken Thailand more than 50 years to develop the healthcare system whose strengths shone out in the global fight against COVID-19.
— Thai PBS News

Baby elephants killed by electric fence in Chantaburi
2 baby elephants have apparently been electrocuted in the Tha Mai district of the eastern province of Chanthaburi, near the Cambodian border, when they touched an electric fence put up by an orchard owner to keep foraging animals out.
— The Thaiger

Thailand to Make Highways Safer with Flexible Rubber Road Barriers
Thailand, home to Asia’s deadliest roads, may have found a way to make its highways safer using rubber while helping the economy in the process.
— Chiang Rai Times

Petition fails against NLA senator picks
The Office of the Ombudsman has dismissed a petition seeking the removal of 90 senators who were members of the now-defunct National Legislative Assembly (NLA), saying it has no jurisdiction over the case.
— Bangkok Post

Banyin moved to solitary confinement amid rumours of escape plan
Former deputy commerce minister Banyin Tangpakorn was transferred to a solitary cell after Bangkwang Central Prison officials learned of an alleged escape plan that involved taking the prison chief’s wife hostage and escaping in a helicopter.
— The Nation

Government assures farmers won’t lose rights under CPTPP
The Comprehensive and Progressive Agreement for Trans-Pacific Partnership (CPTPP) being weighed by a special committee of the House of Representatives has yet to result in agreement between supporters and detractors as farmers are still concerned about their rights to plant species, prompting the Asia and Pacific Seed Association (APSA) to hold a seminar titled “Will Thai Farmers Lose Out Under CPTPP?”.
— Newsline (video)

Small parties make bid for cabinet spot
Seven small political parties have vouched for Mongkolkit Suksintharanon, leader of the Thai Civilised Party, to get a cabinet seat on their behalf if a reshuffle takes place.
— Bangkok Post

Reconciliation, reform commission seeks urgent changes
The government has decided to adjust its approach to national reconciliation and reform in light of current circumstances, looking to adapt laws towards greater efficacy and to open the way for careers by public members.
— Newsline (video)

Supoj’s inmate rehab panel appointment ‘disgusting’
The Anti-Corruption Organisation of Thailand (ACT) says it is opposed to the appointment of former permanent secretary for transport, Supoj Saplom, to a sub-committee developing a project to rehabilitate prison inmates.
— Bangkok Post

Thailand allows laborers to return to offshore jobs
The government of Thailand has allowed thousands of its citizens to return to work overseas as the coronavirus disease-2019 (COVID-19) subsided in some countries.
— Asean Economist

Ex-China defender accepts criticism after 5-1 Thailand defeat
Former China international defender Zhao Peng has conceded that his predecessor Fan Zhiyi’s criticism of a poor performance of his was justified.
— Xinhua

Bang Saen to become Thailand’s First Zero Waste Beach
Researchers, environmentalists, and administrators from various agencies are working to earn Bang Saen Beach a badge as a zero-waste beach, after years of being considered a venue known for waste pollution.
— Newsline (video)

Rubber authority working on ‘hats’ to prevent latex damage during rains
The Rubber Authority of Thailand (RAOT) and partners are developing rubber “hats” to help increase rubber production and promote the industry.
— The Nation

Panel to probe destruction of ‘heritage’
The Department of National Parks, Wildlife and Plant Conservation (DNP) have set up a committee to investigate the demolition of a 127-year-old building in the northern province of Phrae.
— Bangkok Post

Thai rebels pay a price for coming above ground
After 17 years of fighting that has claimed over 7,000 lives, laying down arms was never going to be easy for Thailand’s Barisan Revolusi National (BRN), the long-standing separatist movement that controls virtually all of the southern conflict’s on-the-ground combatants.
— Asia Times

Police on look out for illegal border crossings
The Immigration Bureau (IB) is gearing up its efforts to prevent thousands of migrant workers from Laos and Cambodia from sneaking into Thailand illegally through natural channels to seek jobs.
— Bangkok Post

Loei to skip popular ghost festival this year
The Phi Ta Khon Ghost Festival will not be held this year, the chief of Dan Sai district in Loei province said on Saturday (June 20).
— The Nation

Former communist base in Phatthalung to become tourist spot
A former base of the Communist Party of Thailand (CPT) is being developed as a new tourist spot in this southern province, Tourism and Sports Minister Pipat Ratchakitprakan said.
— Bangkok Post

Details of two motorways projects being finalised
The Department of Highways has reported progress in two motorways’ operations and maintenance projects, between Bang Pa-in and Nakhon Ratchasima and between Bang Yai and Kanchanaburi provinces.
— The Nation

Joint panel to tackle rehabilitation
The government and the private sector have agreed to revive the Joint Public-Private Consultative Committee (JPPCC) as a core forum for the two to work together on solutions for the country’s social and economic rehabilitation after the pandemic.
— Bangkok Post

Proposal to re-open nightlife and entertainment industry in Thailand to be presented to decision makers this week
Following a morning meeting between prominent members of the Thai entertainment and Nightlife Industry a proposal for re-opening of entertainment venues will be discussed during full meetings of the Center for Covid-19 Situation Administration (CCSA) later this week.
— The Pattaya News

Whistle-blowing army NCO to face desertion charge
Army Sergeant Narongchai Intharakavee, aka “Moo Arm”, who exposed alleged corruption in the Army Ordnance Department, is due to appear before judge advocate officers on Monday, to face a desertion charge for failing to report to work for more than 15 consecutive days.
— Thai PBS News

10 arrested over spreading ‘fake news’ online
10 more suspects have now been arrested for allegedly spreading fake news by officials from the Anti-Fake News Centre.
— The Thaiger

Activists are concerned about unchecked government power during the COVID-19 pandemic
Suwit Kulapwong, head of the Human Rights and Environment Association, warns the state of emergency limits the public’s ability to check the powers of the government.
— Isaan Record

Budget limiting quality of tours
Tour operators are struggling to design tour programmes compatible with the 2,000-baht limit per person for 1.2 million health volunteers subsidised by the government, saying the tight budget may constrain the quality of the tours.
— Bangkok Post

Injured adventure cyclist rescued in Chon Buri forest – VIDEO
An off-road adventure bicyclist was rescued after a bicycle accident in a forest in Chon Buri’s Banglamung district yesterday.
— The Thaiger

Russian charged with credit card fraud on Koh Samui
Police in Koh Samui, in the southern province of Surat Thani, have arrested a 35 year old Russian man for allegedly using counterfeit credit cards to buy goods on the resort island.
— The Thaiger

Thousands of Thai workers to return to Taiwan
The Labour Ministry has approved thousands of labourers to go to work in Taiwan, as the Covid-19 pandemic subsides.
— Bangkok Post

THAI staff up in arms at benefit cuts
The Labour Ministry will invite the management of Thai Airways International (THAI) for talks over a complaint submitted on Friday to the ministry by the airline’s labour union over unreasonable cuts in work benefits, especially healthcare welfare, according to the labour union.
— Bangkok Post

Remembrances of Red Trauma (29) – Are we what we remember?
In this final part of our series on the tenth anniversary of the political violence of 2010 and its aftermath, we want to capture some of the comments and feedback we received from readers and contributors.
— Isaan Record

Face to Face With 1932 Revolt Leaders, in Their Eternal Rest
The history associated with the 1932 revolution, which ended absolute monarchy in Thailand, might be disappearing one monument at a time, but the final resting place of the revolt leaders remains untouched to this day.
— Khaosod English