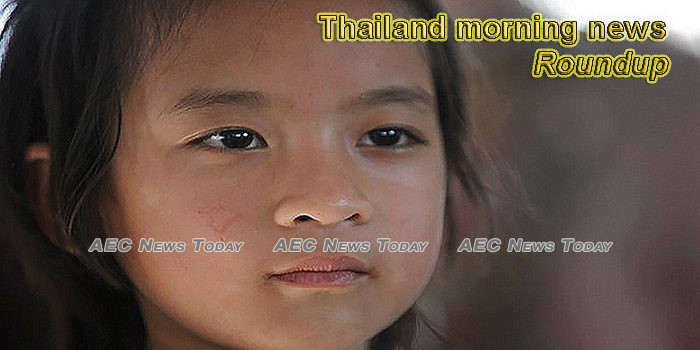 Car sales to plunge 30-50% in 2020: FTI
Domestic car sales in Thailand may drop by 30-50% this year from last year’s 1 million vehicles as the coronavirus hit demand, the Federation of Thai Industries (FTI) said on Thursday.
— Bangkok Post

Returnees from NZ had fevers
Four Thais returning from New Zealand were found to have a high fever on their arrival at Suvarnabhumi airport on Wednesday night.
— Bangkok Post

Central bank plans digital payment prototype
The Bank of Thailand unveiled on Thursday plans to build a prototype of a payment system for businesses using central bank digital currency (CBDC), or traditional money but in digital form being developed by monetary authorities around the world.
— Bangkok Post

My Experience With Prejudice as an African Priest in Thailand
I’ve been working in Thailand as a Catholic priest since 2012. Many times, I have been bullied and subject to discrimination just because of my black skin.
— Khaosod English

Move Forward seeks changes to emergency law
The Move Forward Party is pushing a law amendment to make the government more accountable during the state of emergency.
— Bangkok Post

Pick me! Health Minister Anutin wants 1st dose of experimental vaccine
The beleaguered health minister who went from would-be public health hero to zero through a series of unforced errors is ready for his redemption arc: as human guinea pig.
— Coconuts Thailand

Thailand considers ‘Emergency Decree’ alternative after June 30
Health and security agencies will consider enforcing existing laws instead of the Emergency Decree for COVID-19 control, after the end of the State of Emergency, while the general public is constantly reminded to continue taking precautionary measures.
— Pattaya Mail

Thailand Says Rising Yields No Bar to $32 Billion Borrowing Plan
Thailand expects to accelerate the pace of borrowing for a 1-trillion-baht ($32-billion) stimulus program and isn’t concerned by a recent steepening in the sovereign-debt yield curve.
— Bloomberg

Kingdom still attractive to foreign investors thanks to top-notch logistics, technology, agriculture
Thailand, especially the Eastern Economic Corridor (EEC), will recover quickly from the Covid-19 crisis because the country can draw investment from its readiness in logistics infrastructure, technology, medical industry as well as capacity to grow food, the EEC Office said.
— The Nation

Central bank orders cut in interest rates across the board
The Bank of Thailand (BOT) has ordered commercial banks and non-banking entities to cut down the interest rates they charge for credit cards, personal credit and hire purchase by 2 to 4 per cent in a move to help people struggling with debt due to the Covid-19 crisis.
— The Nation

Thailand’s strategic drift: local politics and superpower competition
China’s relatively fast recovery from the Covid-19 pandemic and the reopening of its economy have posed a new dilemma to ASEAN states over whether to accept or reject Beijing’s ‘coronavirus diplomacy’ of aid and assistance.
— The Strategist (blog)

MCOT to fight B3.2bn spectrum deal
MCOT Plc has vowed to appeal against the National Broadcasting and Telecommunications Commission’s (NBTC) decision to pay 3.2 billion baht in compensation for the 2600-megahertz spectrum recall for the 5G licence auctions in February.
— Bangkok Post

Hotels ready for price war
Hotels are desperate to cut room rates in the scrum to draw domestic tourists following the state’s subsidised tourism packages, hoping to gain any occupancy before the country opens up to foreign travellers.
— The Phuket News

Care founders call on govt to quit
Care, the newly formed political group, has sent a strong message urging “all uncles” to end their grip on power and return democracy to the country.
— Bangkok Post

People warned of Dengue fever
The Sakaeo provincial administration has warned people of dengue fever and reminded that the disease is still very dangerous, amid the COVID-19 outbreak.
— Newsline (video)

RTAF to Launch Satellite on June 19th
The Royal Thai Air Force is going to launch “นภา-1”, the satellite to be used for observation and disaster support, on the 19th of June.
— Newsline (video)

Commerce Min unveils ‘Lot 5 Back to School’ program to ease financial burden of students’ parents
The Ministry of Commerce has launched a project to help ease the financial burden of parents, who are buying school supplies and uniforms for their children ahead of the reopening of schools next month.
— Newsline (video)

PM’s Office secretary general to promote public access to government information
The Office of the Prime Minister and the Public Relations Department (PRD) jointly followed up on the progress of the 2020 public relations projects to raise public awareness and understanding of government policies.
— Newsline (video)

Woman slashes her dad’s penis
A woman who allegedly killed her father by stabbing him in the head and slashing his penis is being checked for mental illness and drug abuse.
— Bangkok Post

Bangkok on track for more green spaces with park on old train line
A new park in Thailand’s capital – built on an abandoned train track – can be a model for turning the city’s other unused spaces into much-needed green areas to boost well-being and mitigate climate-change impacts, urban experts said on Tuesday.
— Eco-Business

Revealing the secrets of “Sri Trang Gloves” – Thailand’s largest rubber glove producer and one of the world’s leader
The demand for rubber gloves in several industries, particularly in the health industry, has been growing constantly in recent past, due to the increased use of health and hygienic products among consumers in relation to the COVID-19 pandemic.
— Bangkok Post

Illegal online gun dealer nabbed in Nonthaburi
Police in Nonthaburi province, on the northern outskirts of Bangkok, arrested a man this morning for selling guns illegally online, and seized 2 firearms found in his possession.
— The Thaiger

Thai LGBT advocates push for equal rights for same-sex marriage
LGBT equality advocates are calling on Thailand to allow same-sex marriage, asking that laws regarding marriage simply change the words “man and woman” so same-sex couples can have the same rights as traditional married couples.
— The Thaiger

Top Gov’t Officials Split on Extending the Virus Emergency Law
Senior government officials on Thursday remained divided on whether to extend the Emergency Decree, which is set to expire by the end of this month.
— Khaosod English

Job Opportunity: Snitch on People Polluting Bangkok Canals
See a neighbor dumping a washing machine or mattress into the waterways of the Venice of the East? Call the city authorities and get paid half the fine, officials said Wednesday evening.
— Khaosod English

Aussie woman arrested for shoplifting in Chiang Mai – VIDEO
Police in the northern province of Chiang Mai yesterday announced the arrest of a 38 year old Australian woman who allegedly stole 6 inexpensive items from a store in tambon Chang Moi, in Mueang Chiang Mai district.
— The Thaiger

Editorial: Enough with the threats and warnings, focus on transparency and clarity
For nearly every day of the last few weeks of the news cycle in Thailand as the Center for Covid-19 Situation Administration lifts restrictions and regulations put in place to help control a potential spread of the Covid-19 Coronavirus we have been treated to round after round of threats and warnings, veiled and not.
— The Pattaya News