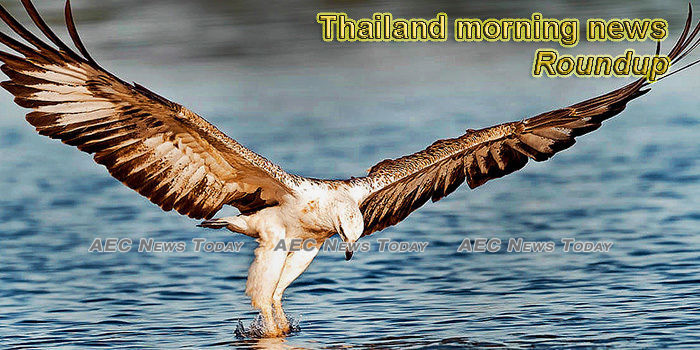 Hungarian’s death in Suvarnabhumi cell sparks special probe
A fact-finding panel has been set up to investigate the death of a Hungarian man while he was being detained at Suvarnabhumi airport for overstaying his visa.
— Bangkok Post

Police announce nationwide crackdown on air pollution
The Royal Thai Police are preparing measures to counter the PM2.5 problem by tackling the sources of air pollution in areas reported with poor air quality, a spokesman said on Sunday.
— The Thaiger

‘It’s Just a Flu,’ Health Min Insists Coronavirus Under Control
The government on Monday said it is closely monitoring the coronavirus epidemic in Thailand, where officials have confirmed eight cases of infection so far.
— Khaosod English

Cambodian-Thai trade hits $9B, goal at $15B for 2020
Bilateral trade between Cambodia and Thailand was worth some $9 billion last year, up 7.14 per cent from 2018’s $8.4 billion, data from the Royal Thai embassy in Phnom Penh shows.
— The Phnom Penh Post

Crisis deals B50bn hit to tourism
The coronavirus crisis is likely to cost Thailand at least 50 billion baht in lost tourism income associated with China’s blanket ban on tourists leaving its affected cities, according to the Tourism Council of Thailand.
— Bangkok Post

Overstay fines and penalties waived for tourists with travel delays due to Coronavirus in Thailand
Foreign tourists whose travel plans are disrupted by the coronavirus outbreak will not be fined if they overstay in Thailand, the Immigration Bureau said on Monday.
— The Pattaya News

PM: Aircraft ready to bring Thais out of Wuhan
Prime Minister Prayut Chan-o-cha said aircraft were on standby to evacuate Thais from virus-hit Wuhan but China has not given permission, saying it can control the situation.
— Bangkok Post

Prosecutors explain why no murder charge yet filed in Billy’s disappearance
The widow of missing Karen rights activist Porlajee “Billy” Rakchongcharoen today appealed to the attorney-general for justice, after the Office of Special Cases clarified why it had dropped all charges,…
— Thai PBS News

Thai stocks tumble as China virus adds to economic woes
The Stock Exchange of Thailand index slumped on Monday amid concern China’s ban on all group tours would damage the vital tourism industry, adding to the problems of a struggling economy.
— Bangkok Post

Smog-choked Bangkok struggles to improve air quality
Toxic smog has been cloaking the cities of the Asia-Pacific region recently, and Thailand’s capital is no exception, pushing authorities to implement measures to reduce the level of harmful particles known as PM2.5.
— Nikkei Asian Review (paywall)

Thailand drops one spot in GTCI rankings
Thailand slipped one position to 67th in the 2020 Global Talent Competitive Index (GTCI) of 132 countries, weighed down by poor vocational and technical skills.
— Bangkok Post

B300bn available amid budget delay
The government is able to disburse 300 billion baht worth of obligation budget during the months-long delay of the 3.2-trillion-baht fiscal 2020 budget.
— Bangkok Post

Thailand: Trial Resumes in 2015 Shrine Bombing Case
Two Uyghur men accused of carrying out a bombing that killed 20 people at a Hindu shrine in Bangkok in 2015 pleaded not guilty Monday, a defense lawyer said, as their trial resumed for the first time since 2017.
— Benar News

Cambodian-Thai trade hits $9B, goal at $15B for 2020
Bilateral trade between Cambodia and Thailand was worth some $9 billion last year, up 7.14 per cent from 2018’s $8.4 billion, data from the Royal Thai embassy in Phnom Penh shows.
— The Phnom Penh Post

Commerce Min expanding export markets with “FTAs”
Amid the ongoing trade war between the United States and China, the government is encouraging farmers, community enterprise operators and small and medium-sized enterprise (SME) operators to take advantage of the 13 Free Trade Agreements (FTAs) currently in existence with 18 countries.
— Newsline (video)

Rajavithi Hospital prepares plan to deal with brackish tap water
Rajavithi Hospital, under the supervision of the Department of Medical Services, has prepared measures to deal with salty tap water in an effort to build trust and confidence among patients, especially those undergoing hemodialysis.
— Newsline (video)

GHB adopts Finance Ministry’s policy to help people buy houses
The Government Housing Bank (GHB) has prepared some 100 billion baht in credit, to help people at all income levels to own a house.
— Newsline (video)

EEC Office to speed up project terms
Terms of reference for smart cities and the maintenance, repair and overhaul (MRO) facility’s second phase at U-tapao airport are scheduled to be issued within two months.
— Bangkok Post

In virus-hit ‘ghost town’, stranded Thai student waits for help
When Thai medical student Badeephak Kaosala dares to leave his rented apartment in the central Chinese city of Wuhan, he puts on a mask, gloves, a hat and layers of clothing to try to avoid infection with the coronavirus that has the city on lockdown.
— CNA

Pattaya City Officials hand out hundreds of free surgical masks to tourists at Bali Hai in response to rising concerns of Chinese Coronavirus
City Officials handed out hundreds of free surgical face masks to Pattaya tourists this afternoon on Bali Hai Pier. No infections from the Chinese Coronavirus have been found in Pattaya, authorities confirmed despite false rumors on social media.
— The Pattaya News

Pattaya City to completely renovate and improve viewpoint near Bali Hai in partnership with Nong Nooch Gardens
Pattaya City plans to improve the scenery at Bali Hai Cape to make it a sunset viewpoint after the public area was reclaimed from entrepreneurs.
— The Pattaya News

‘Mae Manee’ charged with B1.3bn Ponzi fraud
The public prosecutor charged Wantanee “Mae Manee” Tippaveth, her husband and five other people on Monday with defrauding over 2,500 victims out of a total 1.3 billion baht through their Ponzi scheme.
— Bangkok Post

Pattaya leaders meet to discuss effects of Coronavirus on tourism
Pattaya luminaries, community leaders and business owners met yesterday at Nong Nooch Tropical Botanical Garden to discuss the effect of the Wuhan Coronavirus on local tourism and ways to minimise the damage.
— The Thaiger

Thai prosecutors drop murder charge in case of disappeared activist
A Thai park official implicated in the alleged killing of an environmental activist will not face prosecution for murder due to insufficient evidence, the attorney general’s office announced Monday — a move condemned by rights groups decrying impunity for enforced disappearances.
— CNA

Air quality improves in Bangkok, North still battling some haze
The severe air pollution which has plagued Thailand in recent weeks is improving: air quality is dramatically better in most areas today except in the north, where the PM2.5 level remains above safe levels, especially Lampang and Phrae provinces.
— The Thaiger

Nonthaburi mansion fire burns away damages valued at 10 million baht
A fire at a mansion in the central province of Nonthaburi has created over ten million baht worth of damage.
— The Thaiger

Pattaya welcomes 4000 US soldiers for Cobra Gold in February
The 39th annual Cobra Gold military exercise will be held from February 24 to March 6 with 4,000 US personnel, three navy ships and one commercial vessel.
— The Thaiger