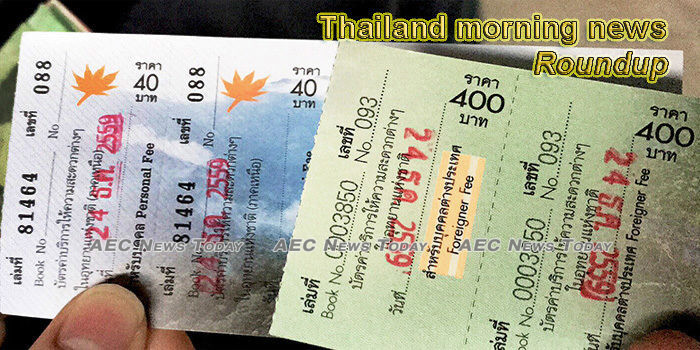 Thai Health Ministry mulls listing Italy as high risk for COVID-19 infection
Thailand’s Ministry of Public Health is considering listing Italy as one of the high-risk countries for COVID-19 infection, travellers arriving from which will be screened at their port of entry into Thailand, Dr. Thanarak Plipat, deputy director-general of the Disease Control Department, told a media conference today.
— Thai PBS News

Commerce Ministry: face masks export still not allowed
The Ministry of Commerce has implemented stricter measures to prevent exporters to export face masks. Members of the public are only allowed to purchase no more than 30 pieces at a time for personal use.
— Newsline (video)

Thailand’s Worst-Case Plan for Coronavirus Revealed
Military field hospitals and closure of facilities like schools and prisons will be introduced if the coronavirus epidemic took a turn for the worse, a government source said Thursday.
— Khaosod English

PM orders precautionary plans to cope with Stage 3 spread of COVID-19
Thailand’s Committee for Emerging Infectious Diseases has been instructed, by Prime Minister Prayut Chan-o-cha, to develop precautionary measures to cope with a Stage 3 spread of COVID-19 in the country. The instruction was issued as he chaired a meeting of the committee at Government House this morning.
— Thai PBS News

Future Forward ruling sparks flash mob at Bangkok’s Thammasat U.
The Student Union of Thailand held a brief rally at the campus of Thammasat University yesterday, to protest the Constitutional Court’s decision to dissolve the Future Forward party, strip its MPs of their status and and ban its executive committee members from politics for ten years.
— The Thaiger

Virus crisis will ease after Songkran: Tourism minister
The Covid-19 corona virus crisis is expected to subside in the second half of the year or earlier, Tourism and Sports Minister Pipat Ratchakitprakan said on Sunday.
— Bangkok Post

Airport screening to be boosted
The Ministry of Public Health is closely following the rapid outbreak of Covid-19 in Italy where 14 people were found to be infected in one day.
— Bangkok Post travel

Suspected forest arsonist nabbed with fire-setting devices
An employee of a rock crushing plant, in Mae Tha district of Thailand’s northern province of Lampang, has been taken into police custody on suspicion of starting fires in the Mae Jang forest reserve.
— Thai PBS News

AIS the first operator to launch 5G
Advanced Info Service (AIS) has launched 5G ultra-fast internet service on the 2600-megahertz range it acquired from the recent auction, saying thousands of its cell sites are compatible with the frequency band.
— Bangkok Post

THAI cancels flights due to virus
Thai Airways International will cancel some flights to eight countries this and next months as the coronavirus outbreak has crippled air travel.
— Bangkok Post

Thailand’s Neighbors Denounce Court’s Opposition Party Ban
Thailand’s neighbors in Southeast Asia are condemning Bangkok for dissolving an opposition party Friday, which critics view as the latest sign democracy is in retreat in the region.
— VOA

MFA takes care of Thais in COVID 19 hit countries
The Ministry of Foreign Affairs has reassured that the Royal Thai Embassies and Consulates General are in touch with Thai nationals abroad, keeping them informed, and make periodic updates regarding the situation in each country back to Thailand.
— Newsline (video)

Thai health boss strongly warns against public protests or political gatherings at this critical time
Thailand’s Deputy Director of the Disease Control Department at the Ministry of Public Health, Dr Thanarak Plipat, on Saturday, warned any political protest organisers in the country off organising events or any activities that may bring large numbers of people together.
— ThaiExaminer.com

Censure debate kicks off Monday
Despite the censure debate against Prime Minister Prayut Chan-o-cha and five cabinet ministers kicking off today without key speakers from the now-dissolved Future Forward Party, the session will be no less interesting, according to opposition chief whip Sutin Klungsang.
— Bangkok Post

Suphan Buri looking into dealing with sugarcane waste to reduce PM 2.5
The Department of Agriculture has piloted research into using sugarcane refuse to reduce levels of particulate matter of 2.5 microns or less (PM2.5) in Suphan Buri province.
— Newsline (video)

FFP demise could swell sympathy for opposition
The disbandment of Future Forward Party (FFP), ordered by the Constitutional Court on Friday, could actually help the opposition, analysts say. It may lose a number of votes in the upcoming censure debate, but will likely gain more sympathy and even support from the public in its fight to bring down the coalition government.
— Bangkok Post

MFA gives volunteers medals for helping evacuate Thais from Wuhan
The Ministry of Foreign Affairs has held a ceremony to present honorable brooches and certificates to 14 persons involved in the rescue mission of Thai nationals from Wuhan and Hubei province in China, as a token of appreciation for their devotion and personal sacrifice.
— Newsline (video)

Pattaya City Expats Club presents facts on Coronavirus
The subject of the outbreak of the Coronavirus in China which is also beginning to appear in other countries, especially Thailand, has been a main subject of news media; not only in Thailand, but around the world.
— Pattaya Mail

Burning incense sticks for prayers can be bad for health, say Thai scientists
THE Ministry of Health in Thailand has issued repeated warnings against the burning of incense sticks and papers, because they could release health-threatening chemicals and toxic smoke.
— The Sun Daily

Banyin denies charges on disappearance of judge’s brother
Banyin Tangpakorn has denied two new charges pressed against him by police after the former MP for Nakhon Sawan was arrested at his house on Sunday morning.
— Bangkok Post

Pre-cadet school saved from fire as blazes rage
Firefighters have saved the Armed Forces Academies Preparatory School from a fire but their colleagues are still trying to suppress blazes in two national parks.
— Bangkok Post

US ships arrive for Cobra Gold 2020
Ships from the US Expeditionary Strike Group (ESG) have arrived in Thailand in preparation for Exercise Cobra Gold 2020.
— The Thaiger

THAI denies sales slump will force pay cuts
National carrier Thai Airways International (THAI) denies it is cutting staff salaries in light of the Covid-19 outbreak which has dented the finances of many airlines.
— Bangkok Post

Ex-NIA deputy chief accuses US embassy of interference in Thailand’s internal affairs
Thailand’s former National Intelligence Agency deputy director Nanthiwat Samart has accused the US embassy in Bangkok of interfering in Thailand’s domestic affairs over the Constitutional Court’s decision on Friday to dissolve the Future Forward party and to ban its executive committee from politics for ten years.
— Thai PBS News

Defiant Thanathorn vows to carry on to reach their unmet objectives
Former Future Forward party leader Thanathorn Juangroongruangkit has vowed to carry on reaching for the party’s unfinished objectives, to stop the junta from prolonging its stay in power, to reform the military and to amend the current Constitution among others, through the setting up of the Khana Anakhot Mai (Future Forward group).
— Thai PBS News

2 dead, 18 injured in Nakhon Si Thammarat bus crash
Two people have been killed and 18 more inured in a bus crash today in the southern province of Nakhon Si Thammarat. Police say the bus overturned after sliding backward while ascending a steep hill in Khanom district, killing two passengers and injuring 18.
— The Thaiger

Pregnant woman injured, boy killed as fire-damaged tree collapses on their truck
A boy is dead and a pregnant woman seriously injured after a roadside tree broke and fell on their pickup truck in the western province of Kanchanaburi yesterday.
— The Thaiger

Opinion: Trust Thai Army’s “Reform” at Your Own Peril
When someone wants an organization to be treated as sacred, it’s often because they want it to be above criticism, accepting neither scrutiny nor accountability.
— Khaosod English

How media shape Thais’ understanding of Middle East
With limited access to news and information from media in the Arab world, Thai people’s understanding and perception of the situation in the Middle East is often shaped by what they hear from western media.ThaiPBS World talks to Prof. Dr. Jaran Maluleem, a Middle East specialist at the Faculty of Political Science, Thammasat University, for his views on the issue.
— Thai PBS News

US embassy, Amnesty International oppose dissolution of Future Forward party
The US embassy in Bangkok has expressed concern that the Constitutional Court’s decision on Friday, to dissolve the Future Forward party, risks disenfranchising more than six million Thai voters who voted for the party in the March 24th 2019 general election.
— Thai PBS News

Opinion: 8 Tips for A Saner Digital Diet in These Viral Times
A virus riding on another virus. That is how the ‘infodemic’ is raging in online spaces around the outbreak of the novel coronavirus called COVID-19, which has been on just about everyone’s radar since late January 2020.
— Khaosod English

Student hurt in fall from mall escalator
A 12-year-old schoolboy was seriously injured when he fell from a third-floor escalator while reaching for his dropped mobile phone at CentralWorld shopping complex in Bangkok’s Ratchaprasong area on Thursday afternoon.
— Bangkok Post

Law Criminalizing Abortion is Unconstitutional, Top Court Rules
Reproductive rights activists on Thursday welcomed a ruling by the Constitutional Court that struck down a decades-old ban on abortion, on the grounds that it contradicts the country’s highest law.
— Khaosod English