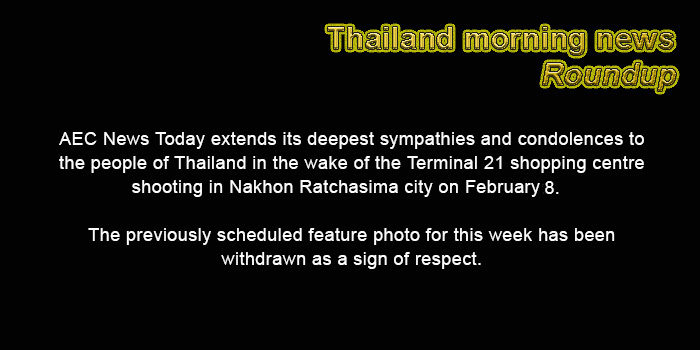 Soldier kills 29 people in Thailand before being shot
A soldier angry over a property deal gone sour killed at least 29 people and wounded 57 in a rampage that spanned four locations in and around the northeastern Thai city of Nakhon Ratchasima before he was shot dead early Sunday.
— Reuters

“Kick them out”: Thai health minister says of foreign tourists refusing to mask up (video)
Less than a week after describing the 2019 novel coronavirus as “just a flu”, Thailand Minister of Public Health, Anutin Charnvirakul, has said foreign visitors to the country who fail to wear surgical masks “should be kicked out”.
— AEC News Today

New criteria push the number of suspected virus cases to 615
The director-general of the Department of Disease Control (DDC) said on Friday there were 615 people in Thailand suspected of carrying the 2019-nCoV coronavirus.
— The Thaiger

Coronavirus UPDATE: 7 more cases in Thailand, WHO battling fake virus news
The number of worldwide coronavirus deaths has now reached 813, exceeding the number of those killed during the SARS outbreak in 2002/2003.
— The Thaiger

29 dead after ‘unprecedented’ mass shooting: Thai PM
A Thai soldier who killed at least 29 people before being shot dead in a mall by commandos went on the rampage because of a debt dispute, the kingdom’s prime minister said on Sunday (Feb 9), offering the first official motive for the unprecedented shooting spree.
— CNA

Tourism Ministry considers collecting tourism fees
The Ministry of Tourism and Sport has introduced the idea of collecting fees from international visitors for the renovation of tourism attractions and natural resources, as well as providing insurance benefits specifically for tourists.
— NNT

DRRAA aims to alleviate drought, smog problems in all areas
Department of Royal Rainmaking and Agricultural Aviation’s (DRRAA) Director General Surasee Kittimonthon said that due to the drought situation and the severe problems of dust and haze, the government has ordered the DRRAA to review the annual royal rainmaking action plan to alleviate problems for people in all regions.
— NNT

HM King extends help to shooting victims
His Majesty the King has accepted the victims of the shooting rampage in Nakhon Ratchasima under his patronage and extended his moral support to their families, as well as authorities who took part in the rescue operation.
— Bangkok Post

Court 2020 Budget bill to be revoted
The Constitutional Court has ruled in a five-to-four vote that the 3.2-trillion-baht Budget Bill for fiscal 2020 is partially valid, and the House of Representatives must hold a revote on the second and third readings of the Budget Bill.
— Newsline (video)

Thailand Touted for Rare Move to Drop Chinese Plan for Mekong River
Rights groups and researchers have welcomed Thailand’s decision to cancel a Beijing-backed project to dredge and blow open a shallow and rocky stretch of the Mekong River along the Thai-Lao border.
— VOA

Myanmar-Thailand border trade reaches over 1 bln in Q1 of FY 2019-20
Border trade between Myanmar and its neighboring Thailand reached over 1.15 billion U.S. dollars in first quarter of the present fiscal year (FY) 2019-2020 which started in October, according to figures released from the Commerce Ministry on Sunday.
— Xinhuanet

Less-than-impressive scorecard
A perfect storm is set for the second Prayut Chan-o-cha government as it braces for a censure debate near the end of this month amid a host of downside risks at home and abroad.
— Bangkok Post

‘High-risk’ evacuees cleared by doctors
Five Thai nationals who were considered at high risk of contracting or spreading the novel coronavirus after arriving on an evacuation flight from Wuhan have been cleared by medical authorities.
— Bangkok Post

Thailand shooting: footage appears to record gunshots – video
Video shared on social media appears to capture sounds of gunshots heard from a car travelling in Nakhon Ratchasima in north-eastern Thailand. Police have said at least 20 people were killed when a soldier opened fire in different locations in the city
— The Guardian (video)

BAAC seeks 50% gain in mobile users
The state-owned Bank for Agriculture and Agricultural Cooperatives (BAAC) aims for 50% growth in mobile banking users to 1.2 million for its next financial year.
— Bangkok Post

Thai banks spread QR code in Asean
Thailand is set to kick off cross-border payment via QR code technology in Asean by mid-year, aiming to enhance financial transactions through the digital platform across the region.
— Bangkok Post

Families of Thai shooting victims wait for answers as country mourns 29 killed in mall rampage
Sirirat Kualraksa blinked back tears as the ambulances delivered gurneys bearing cloth-shrouded bodies to the morgue of a public hospital on Sunday, hours after a vengeful Thai soldier killed 29 people and wounded dozens of others in a shopping centre rampage.
— South China Morning Post

MPs urged not to debate budget bill
Democrat MP Chinaworn Boonyakiat on Saturday called on government and opposition MPs not to debate the 2020 budget bill when they meet this week to re-vote on the second and third readings as ordered by the Constitutional Court.
— Bangkok Post

Thailand, Japan collaborate to increase food trade
The Department of Industry Promotion has joined hands with the National Food Institute and Mie prefecture of Japan to have Japanese food processing and business experts pass on their knowledge to Thai operators as well as stage negotiations with the intention to increase food trade from Thailand and Japan by another 7 billion baht.
— Newsline (video)

PM visits shooting victims in hospital as the nation mourns
The soldier who shot dead at least 25 people in a bloodbath in Korat was killed in a police assault at around 9am today, ending a rampage that lasted more than 17 hours.
— The Thaiger

Constitutional Court ruling on budget bill challenged
Former Pheu Thai MP Wattana Muangsook has challenged the legitimacy of Friday’s ruling by the Constitutional Court, which states that the 3.2 trillion baht budget bill for the 2020 fiscal year is legal but orders the House of Representatives to debate and vote again on the bill’s the second and third readings.
— Thai PBS News

Over 100,000 Chinese tourists still in Thailand, according to Immigration Bureau
There are currently more than 100,000 Chinese tourists and long-stayers in Thailand, including 2,038 who came from the Chinese city of Wuhan, the epicentre of the coronavirus outbreak, and 91,688 from Guangzhou, which is close to Wuhan, Pol Lt-Gen Sompong Chingduang, Commissioner of Thailand’s Immigration Bureau told a news conference today.
— Thai PBS News

Drought effects in provinces alleviated
The Second Army Engineering Regiment has distributed water to villagers affected by drought in Khon Kaen province, while six districts of Nong Bua Lamphu province are reported to be still at risk of drought.
— NNT

Thailand seeks to regaining role as world’s largest rice exporter
After losing the number one global rice exporter position for three years, the Ministry of Agriculture and Cooperatives has met with related agencies and rice exporters to find measures to reclaim the top spot.
— NNT

TCG to help guarantee 80,000 new SMEs this year
In an effort to help SMEs have better access to capital, the Thai Credit Guarantee Corporation (TCG) is this year offering credit guarantees of some 150 billion baht in loans taken out by new SMEs from financial institutions, as well as providing a refinance service for SMEs in trouble.
— NNT

Gov’t to initiate tourism promotion measures to counter coronavirus impact
Concerns regarding novel coronavirus and the delay in the fiscal year 2020 budget bill have had a negative impact on the economy. In response, Deputy Prime Minister Somkid Jatusripitak has ordered the Ministry of Finance to introduce domestic tourism promotion measures and ensure funding for infrastructure investment projects.
— NNT

Gov’t Defends Selling Face Masks to Public
As the government rolled out its own stalls selling face masks on Friday, netizens were enraged to discover the price is nearly five times higher than what other health agencies are offering.
— Khaosod English

Prosecutors postpone indictment of Thanathorn over the Pathumwan skywalk flash mob
The public prosecutors have delayed a decision, until March 17th, over whether indict Future Forward party leader Thanathorn Juangroongruangkit and four other individuals for their alleged role in staging the flash mob on Pathumwan skywalk, in front of the Bangkok Art and Culture Gallery, on December 14th.
— Thai PBS News

Thousands light candles for victims of Thailand mass shooting
Thousands of people holding candles attended a vigil in northeastern Thailand on Sunday (Feb 9) for the victims of a rogue soldier who killed at least 29 people and wounded 57 before being shot dead.
— CNA

Thai government to give financial and emotional assistance to all victims of Korat mass shooting, paying for medical bills of the injured
The Prime minister of Thailand visited the victims of a shooting rampage at Maharaj Hospital this afternoon, assuring them that the authorities have taken action.
— The Pattaya News

Boys Playing With Toy Guns Arrested, Mistaken For Robbers
Two 13-year-old boys were mistaken for robbers and arrested while they were playing with a toy gun in front of a convenience store, police said Friday.
— Khaosod English